A mother reveals her anguish as she releases shocking images of her son’s deadly tumour, dubbed ‘The Terminator’, that has pushed his brain SIDEWAYS.

Callum Hardyman, 19, was diagnosed with a fast-growing, aggressive brain cancer, known as a glioblastoma, in October 2017 after he suffered a severe headache.

Despite undergoing a nine-hour operation at Nottingham’s Queen’s Medical Centre to remove 75 per cent of the tumour, as well as enduring both radio- and chemotherapy, doctors are only able to extend his life.

His mother Tricia, 42, said: ‘The tumour is terminal, Callum will die.

‘I wish there was something, anything, I could do. Feeling that you can, ultimately, do nothing to help your child is so difficult.’

With few options left, Mr Hardyman’s family are trying to raise enough money to pay for non-NHS funded therapies, as well as to provide the teenager, a keen artist, with specialist drawing equipment to help him cope with the grueling treatments.

Glioblastomas affect around four people in every 100,000 every year in the UK.

Callum Hardyman, 19, could die any day unless a miracle drug is found to treat his life-threatening tumour, dubbed ‘The Terminator’, that has pushed his brain sideways 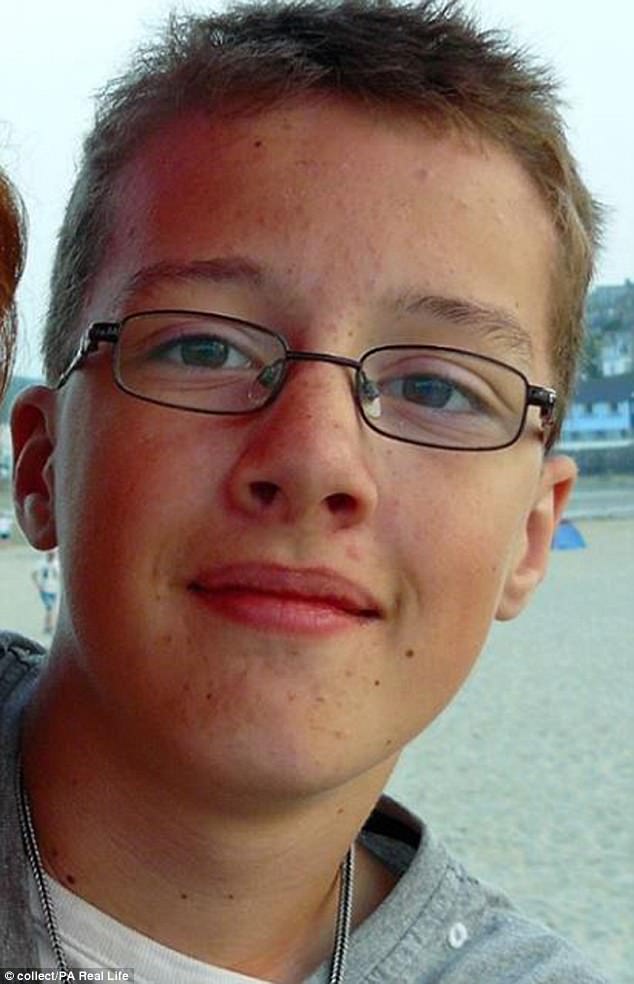 Mr Hardyman was diagnosed with an aggressive, fast-growing brain cancer in October 2017 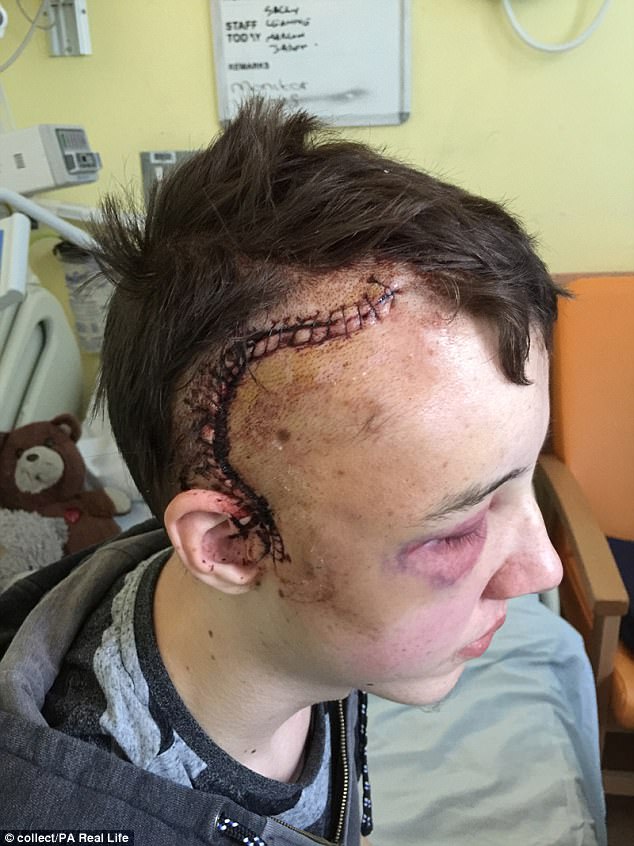 WHAT IS A GLIOBLASTOMA?

Glioblastomas are the most common cancerous brain tumours in adults.

They are fast growing and likely to spread.

Glioblastomas’ cause is unknown but may be related to a sufferer’s genes if mutations result in cells growing uncontrollably, forming a tumour.

Treatment is usually surgery to remove as much of the tumour as possible, followed by a combination of radio- and chemotherapy (chemoradiation).

It can be difficult to remove all of the growth as glioblastomas have tendrils that extend to other regions of the brain. These are targeted via chemoradiation.

Glioblastomas are often resistant to treatment as they are usually made up of different types of cells. Therefore, medication will kill off some cells and not others.

The average survival time is between 12 and 18 months.

Only 20 per cent of patients live longer than a year and just three per cent survive over three years.

‘Why him? It doesn’t seem fair’

Mother-of-four Tricia, a teaching assistant, said: ‘The tumour is terminal, Callum will die.

‘I’m desperate to raise enough money to fund research to find a possible trial drug to extend his life.

‘I wish there was something, anything, I could do. Feeling that you can, ultimately, do nothing to help your child is so difficult.’

Although Mr Hardyman, who was studying engineering, is aware he likely does not have long left, he refuses to be told when he is expected to die and manages to stay relatively positive throughout his treatment.

He said: ‘Originally, I did not really understand what the tumour meant. But now I do, and I am coping all right.

‘The treatment is okay to be fair.’

‘But, despite doing everything right, he has been told he will die. 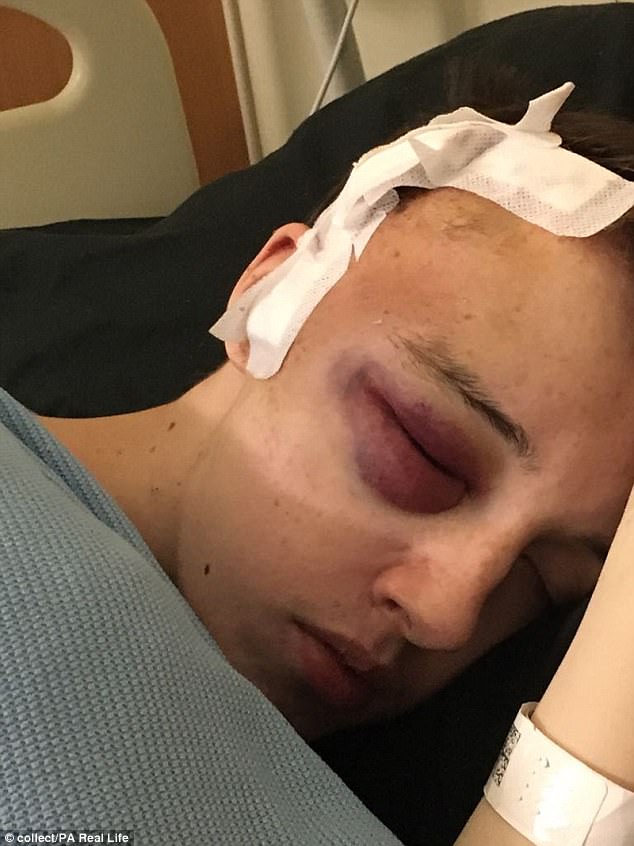 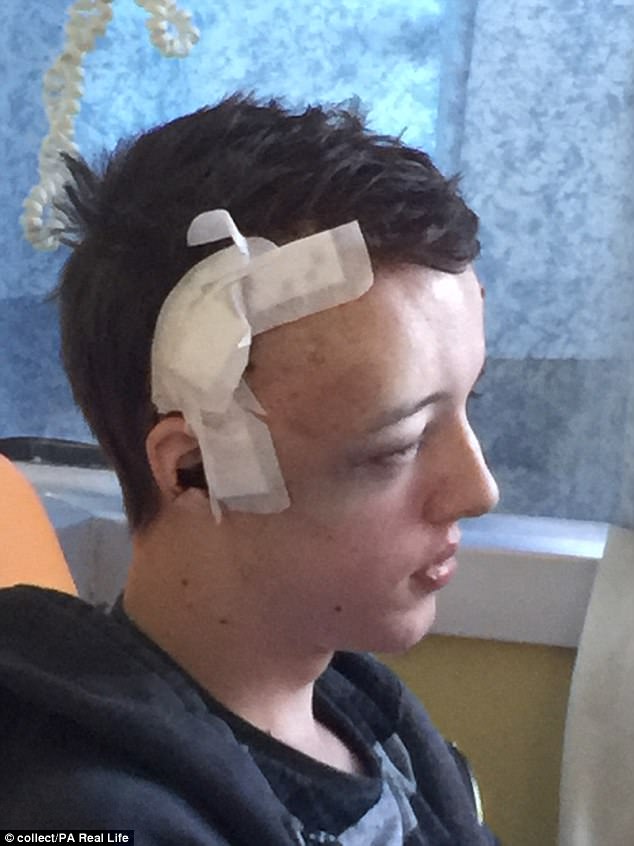 As well as surgery, the teenager has also undergone both radio- and chemotherapy 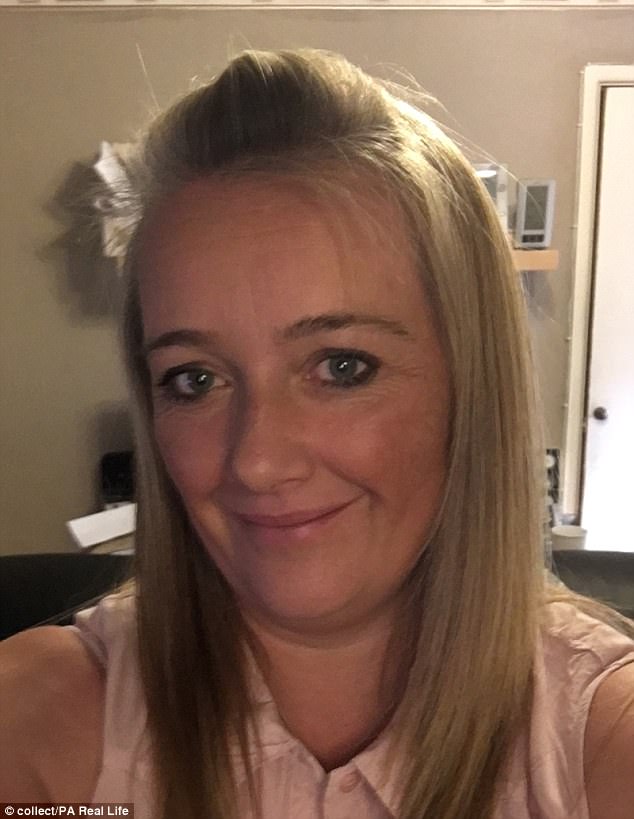 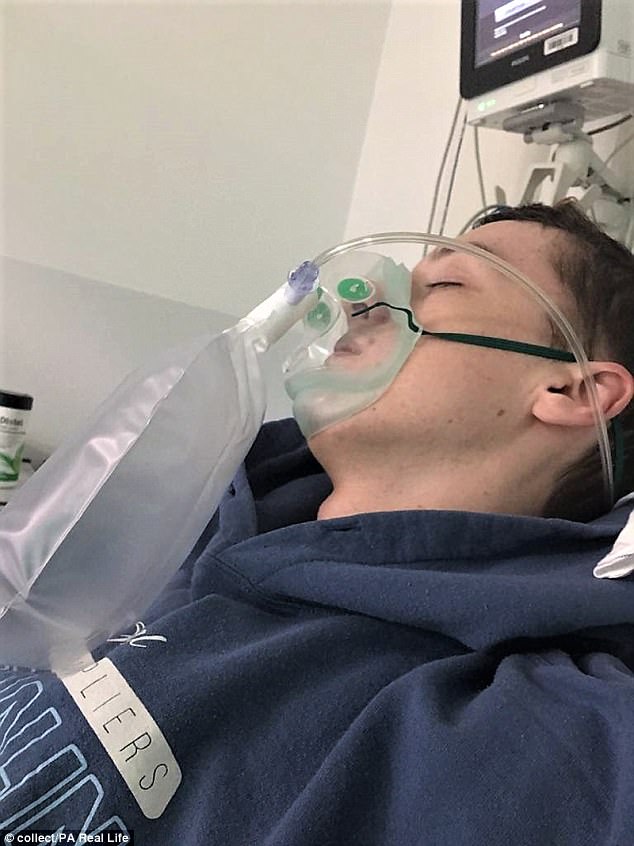 His symptoms first appeared as a headache, prompting doctors to put him on oxygen

‘There’s no reason why he got it’

Mr Hardyman first complained of a headache on a Monday, promoting his mother to take him to his GP, who dismissed it as a migraine.

By Saturday, the headache was agonising and made Mr Hardyman unable to tolerate light.

His family took him to the out-of-hours surgery at Leicester Royal Infirmary where staff suspected he was suffering from cluster headaches and gave him oxygen.

When this failed to ease Mr Hardyman’s pain, he was referred for a CT scan the following day, which showed a shadow on his brain.

Tricia said: ‘On his right frontal lobe was a tumour measuring 4cm by 5cm, which was pushing his brain to one side.’

Surgeons were unaware if the growth was cancerous at the time of the operation, however, this was later confirmed in a biopsy.

Tricia said: ‘The news was devastating. There’s no reason why he got it.

‘All we know is that, as a primary tumour, this means it originated in his brain.’ 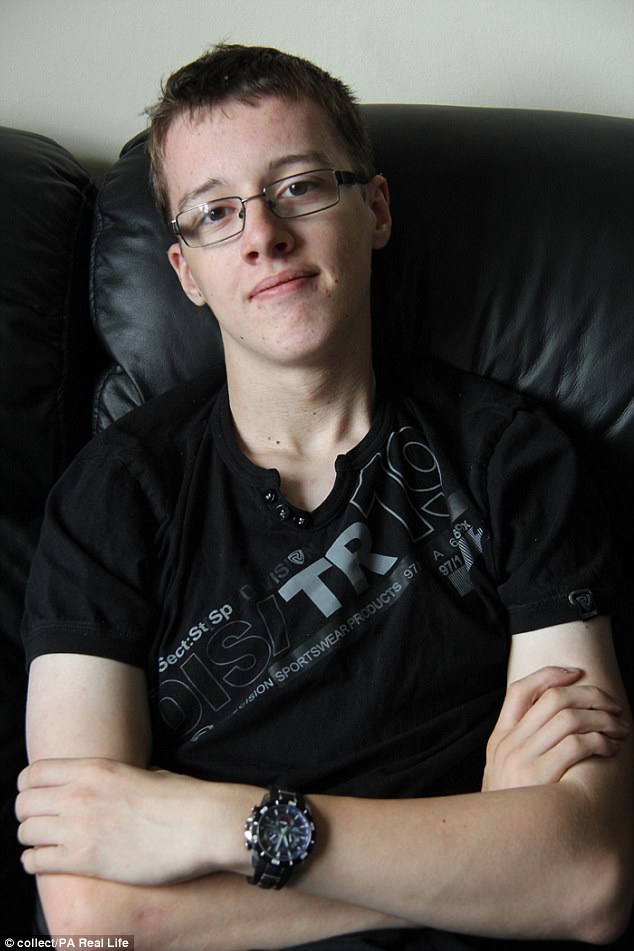 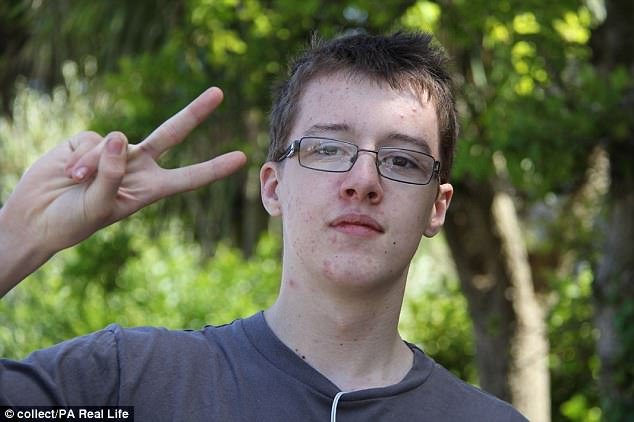 He says he understands his condition, adding the treatment is ‘okay to be fair’ 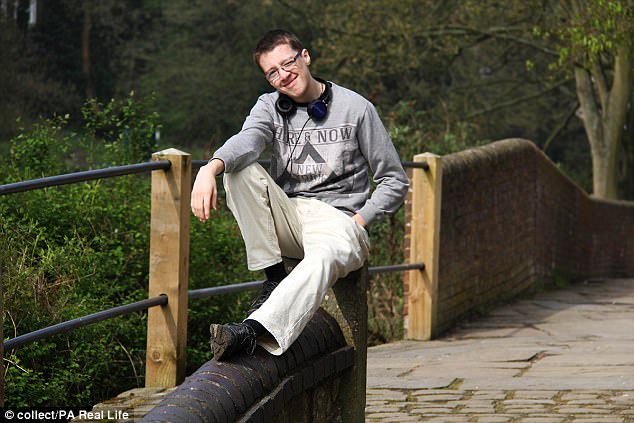 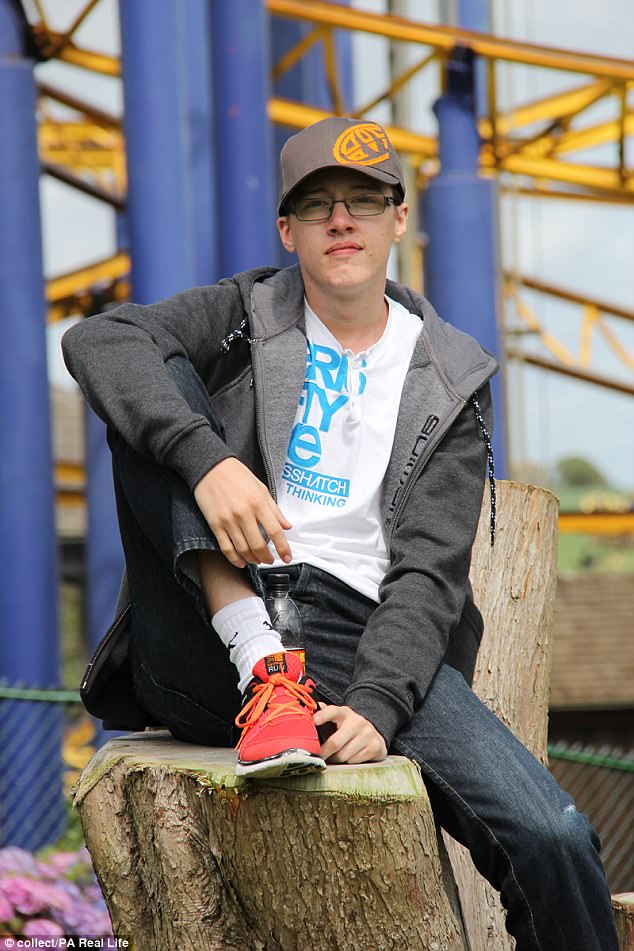 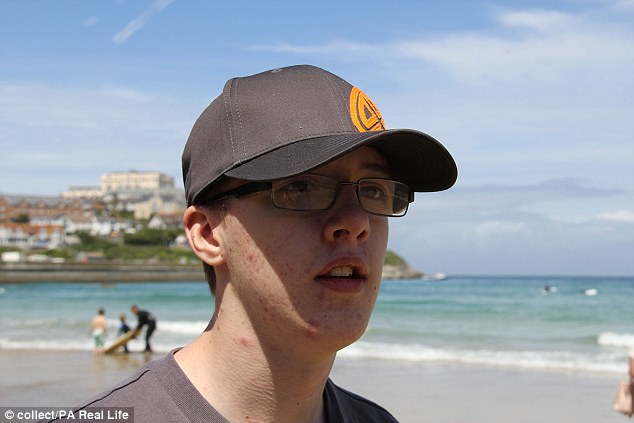