Man’s girlfriend dies in hospital giving birth to their daughter

‘I texted I love you but there was no reply’: New father’s agony as girlfriend dies in hospital giving birth to their daughter without him because he was sent home due to coronavirus rules

A new father has spoken of his devastation after his girlfriend died giving birth to their daughter – but he only found out later because he was sent home to to coronavirus restrictions on the ward.

Patrick Ratcliffe, 22, from Stoke-on-Trent, was not allowed to stay at the hospital as his girlfriend, Samantha Thomas, 21, had not gone into active labour when she arrived.

The couple kept in contact by texting, with Mr Ratcliffe’s message ‘Sammy I love you’ receiving no response, as reported by The Sun.

It is because the 21-year-old died when her heart stopped while giving birth to her daughter Zara-Leigh via C-section.

He told the newspaper: ‘Sammy and I had been texting each other all night, after she was taken into hospital.

Patrick Ratcliffe, 22, from Stoke-on-Trent, was not allowed to stay at the hospital as his girlfriend, Samantha Thomas, 21, had not gone into active labour when she arrived. Pictured: the couple together

‘I messaged to tell her I had changed the bed ready for her coming home and that I would take her some food in.

‘She was texting back, but then she never replied to my final message. I could never in a million years have dreamed that she had died.

‘I was in total shock when I got to the hospital and they said she had already passed. She was a healthy young woman. Zara’s birthday will always be the same date as Sammy’s death.

Mr Ratcliffe added he wanted to make his partner proud and they both chose the name Zara-Leigh before she was born.

The couple met at Iceland last summer when they were both working together and the 22-year-old said he ‘fell for her straight away.’

‘We got serious really quickly and moved in together within a month. Neither of us were big on partying or drinking, we just loved being together, nesting. 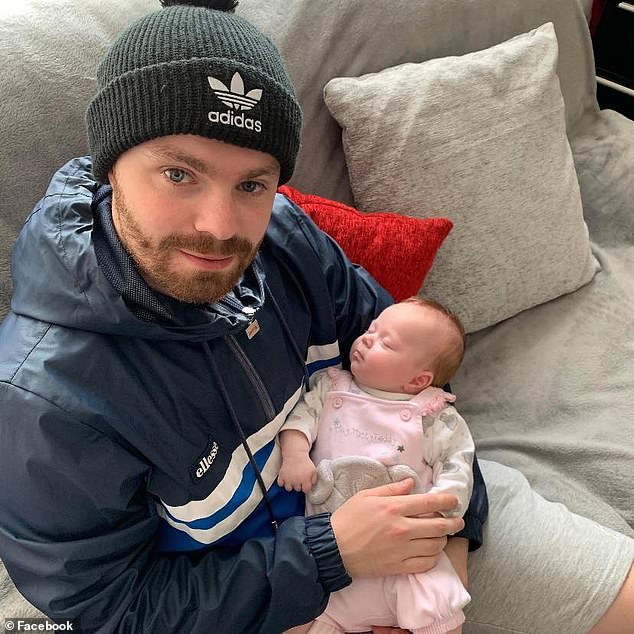 ‘Sammy was very close to her family, as I am. We had the same priorities in life. She was full of smiles.’

Ms Thomas fell pregnant in September last year and the couple were looking forward to meet their baby that was due on April 29.

However she woke one evening screaming in pain was rushed to hospital. Doctors decided to perform a c-section to save the baby.

Mr Ratcliffe went to the hospital and learned his new daughter had survived by his partner passed away.

He added:  ‘I had to call Sammy’s mum, Bev and her step-dad Pete. I was in an absolute state.

‘They said Sammy’s heart had stopped and they couldn’t get it going again.

‘I was told Zara was very lucky to have survived. I just couldn’t believe it. Sammy was a perfectly healthy young woman.’

Doctors at the hospital said that Ms Thomas had suffered from a hemothorax haemorrhage and aortic dissection.