A former officer’s ‘transphobic’ tweets were lawful and police breached his right to freedom of expression by behaving like ‘the Stasi’ when they turned up at his work to brand it a ‘hate incident’, a judge has ruled.

Harry Miller, 54, said the police’s actions had a ‘substantial chilling effect’ on his right to free speech.

The married father-of-four, from Lincolnshire, claims an officer told him that he had not committed a crime, but that 30 messages he had tweeted or retweeted over the past year were being recorded as a ‘hate incident’.

The complaint was received by Scotland Yard from a ‘victim’. Officers in London then contacted Humberside Police to interview Mr Miller after tracing him to his plant and machinery business.

Announcing the court’s decision, Mr Justice Julian Knowles said Mr Miller’s tweets were ‘lawful’ and that the effect of the police turning up at Mr Miller’s place of work ‘because of his political opinions must not be underestimated’.

He continued: ‘To do so would be to undervalue a cardinal democratic freedom. In this country we have never had a Cheka, a Gestapo or a Stasi. We have never lived in an Orwellian society.’ 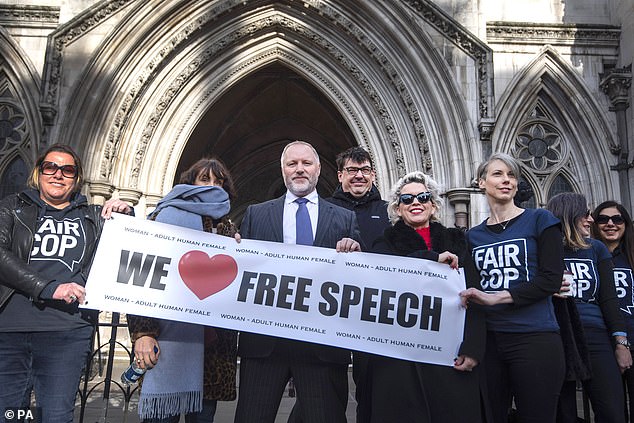 Mr Miller is the founder of campaign group Fair Cop, which challenges police interference in speech. The 54-year-old picture in the middle today holding a ‘We love free speech’ banner

He also said: ‘The claimant’s tweets were lawful and that there was not the slightest risk that he would commit a criminal offence by continuing to tweet.

‘I find the combination of the police visiting the claimant’s place of work, and their subsequent statements in relation to the possibility of prosecution, were a disproportionate interference with the claimant’s right to freedom of expression because of their potential chilling effect.’

The College of Policing’s guidance defines a hate incident as ‘any non-crime incident which is perceived, by the victim or any other person, to be motivated by a hostility or prejudice against a person who is transgender or perceived to be transgender’.

In a ruling on Friday, the High Court in London found Humberside Police’s actions were a ‘disproportionate interference’ with Mr Miller’s right to freedom of expression.

But Mr Justice Julian Knowles rejected a wider challenge to the lawfulness of the College of Police guidance, ruling that it ‘serves legitimate purposes and is not disproportionate’.

The judge said: ‘The claimants’ tweets were lawful and there was not the slightest risk that he would commit a criminal offence by continuing to tweet. 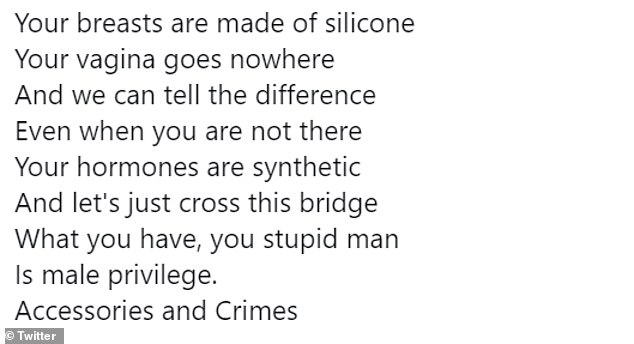 One of the messages which Mr Miller retweeted was a limerick which included the line, ‘Your vagina goes nowhere’

‘I find the combination of the police visiting the claimant’s place of work, and their subsequent statements in relation to the possibility of prosecution, were a disproportionate interference with the claimant’s right to freedom of expression because of their potential chilling effect.’

Who are Fair Cop? Organisation set up by Harry Miller after police grilling over tweets

The organisation founded by Mr Miller has formed from concerns about police attempts to criminalise people for opinions that are not against the law.

On its website the group says:  Some of us have been victims of police interaction following social media activity; some are police officers ashamed at police action.

‘All of us are furious with the ‘Big Brother’ overreach of various police forces and other authorities.

‘We are united in our aim of enforcing existing laws governing freedom of speech, conscience and assembly – rights that belong to us all in this country.’

The group adds that it works to work with the police in order to improve existing guidelines around speech.

At a hearing in November, Mr Miller’s barrister Ian Wise QC said his client was ‘deeply concerned’ about proposed reforms to the law on gender recognition and had used Twitter to ‘engage in debate about transgender issues’.

He argued that Humberside Police, following the College of Policing’s guidance, had sought to ‘dissuade him (Mr Miller) from expressing himself on such issues in the future’, which he said was ‘contrary to his fundamental right to freedom of expression’.

The judge said Mr Miller strongly denies being prejudiced against transgender people, and regards himself as taking part in the ‘ongoing debate’ about reform of the Gender Recognition Act 2004, which the Government consulted on in 2018.

Speaking outside the Royal Courts of Justice after the ruling, Mr Miller said: ‘Mr Justice Knowles was very clear – we have never had a Gestapo or a Stasi in Great Britain.

‘Well, the actions of Humberside Police came way too close for comfort. This is a watershed moment for liberty: the police were wrong to visit my workplace, wrong to ‘check my thinking’.’

His solicitor Paul Conrathe from Sinclairslaw said: ‘We welcome today’s judgment, which is a vindication of Mr Miller’s actions in posting tweets that were critical of transgender ideology and practice.

‘It is a strong warning to local police forces not to interfere with people’s free speech rights on matters of significant controversy.’

Comedy writer Graham Linehan, who attended the hearing in support of Mr Miller, said: ‘I hope that it (the judgment) will make the police be a little more careful about being used as a harassment tool by activists.’ 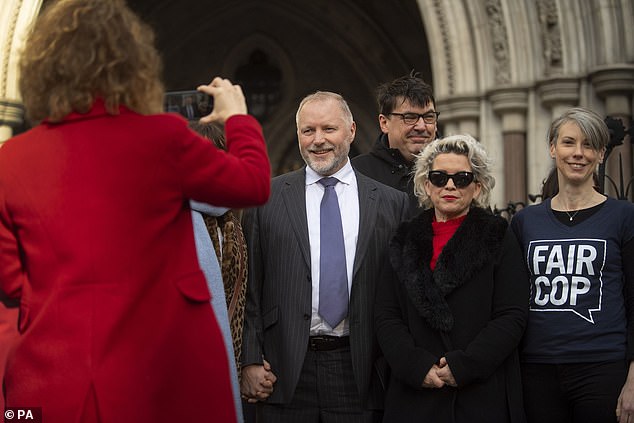 He added: ‘It’s really, really hard to get the message out … we are not transphobic, we just think that there are some issues that really need to be discussed.’

Mr Linehan – who said he has ‘had police come to my house, phone me up’ because of his public opinions on transgender issues – said the ruling was ‘just chipping away at the corner of the problems, but is significant’.

In his judgment, Mr Justice Knowles emphasised: ‘I am not concerned with the merits of the transgender debate. The issues are obviously complex.

The definition of a hate incident, according to The College of Policing

The College of Policing’s guidance defines a hate incident as ‘any non-crime incident which is perceived, by the victim or any other person, to be motivated by a hostility or prejudice against a person who is transgender or perceived to be transgender’.

This differs from a hate crime which is a criminal offence.

The definition of a hate crime, according to the guidance is: ‘Any criminal offence which is perceived, by the victim or any other person, to be motivated by a hostility or prejudice against a person who is transgender or perceived to be transgender.’

‘As I observed during the hearing, the legal status and rights of transgender people are a matter for Parliament and not the courts.’

‘This judgment today has told us that we can do that and, if the police come knocking, say: ‘Miller v Humberside Police, b****r off!”

The interview between Mr Miller and the officer took place at 3pm on January 23 last year.

The PC said he had received a complaint about Harry’s tweets from a ‘victim’ — an unnamed member of the public ‘down south’ — who had alerted the hate crime unit of Britain’s biggest police force, London’s Scotland Yard.

Officers at the Yard, in turn, asked Humberside police to interview Harry after tracing him to his plant and machinery business in the force’s area.

The policeman told Harry that he was in trouble for retweeting a ‘transphobic’ limerick.

He was told that he was also being investigated for tweeting support for BBC Woman’s Hour presenter Jenni Murray, who had been criticised by Oxford students after writing a newspaper article questioning whether transgender women are ‘real women’.

Harry was told in the conversation at Tesco that he had not broken the law but was guilty of a ‘non-crime’ hate incident.

According to court papers, the constable explained to him: ‘Sometimes, a woman’s brain grows a man’s body in the womb and that is what transgender is.’

When Harry asked why the officer kept calling the person who had made the complaint a ‘victim’, when no crime had been established, he was told ‘that’s just how it works’.