New Zealand’s government is facing fury from the Maori community in a pair of disputes over a controversial building project on ‘sacred’ land and the practice of taking children from their families.

Children who are deemed at risk have long been moved into state care, but many Maori people believe the process is racially skewed as most of the youngsters taken into care are from indigenous families.

In one recent case the children’s ministry tried to take a newborn baby away from her mother in hospital, according to reports.

The claims have sparked outrage and prompted hundreds of protesters to gather outside New Zealand’s parliament in Wellington yesterday, holding placards that said: ‘Hands off our tamariki’, the Maori word for children.

Fury: Hundreds of Maori protesters gather outside New Zealand’s parliament in Wellington to voice their fury at the number of Maori children taken into state care

Protesters call the children New Zealand’s ‘stolen generation’ – a reference to indigenous Australians forcibly taken from their families as children under an official policy of assimilation.

The children’s ministry, Oranga Tamariki, said in a report last week that more than a hundred children had been harmed while in state care in the first three months of the year.

Tuesday’s protest coincided with another stand-off with thousands of Maori protesters in Auckland, New Zealand’s largest city, over plans to build a housing project on land they believe is sacred.

The country’s largest builder, Fletcher Building, plans to develop 480 houses in the city of Auckland, on the Ihumatao Peninsula near an airport.

The land borders an important archaeological site and is seen as culturally significant.

Nonetheless, the company this week sent eviction notices to a group that has occupied the land for several years to try to halt the development.

An estimated 5,000 people gathered at the site on Saturday, according to Radio New Zealand, putting up more than 50 tents.

New Zealand’s PM Jacinda Ardern has tried to calm the dispute, promising talks and vowing there would be no building until the row is resolved.

However she has faced criticism for not stepping in earlier, despite Maori leaders in her own party coming out in support of the movement. 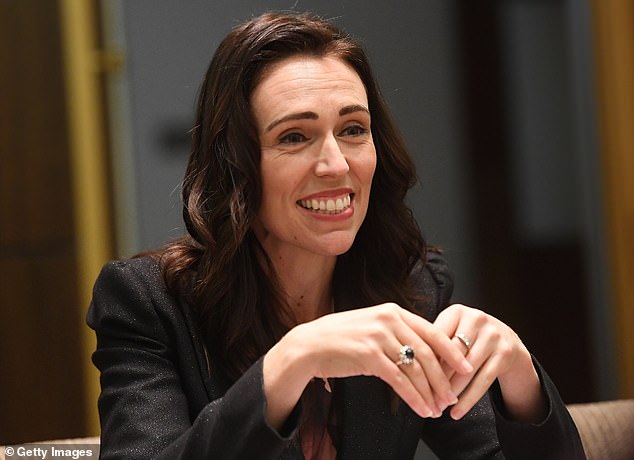 Under pressure: The two protests have presented a challenge for New Zealand’s PM Jacinda Ardern (pictured in Australia earlier this month)

The protesters, led by a Maori group called Save Our Unique Landscape (SOUL), however, say the area has historical, cultural and archaeological significance and should be left as an open space, or returned to the indigenous people.

The project’s supporters argue that it will provide new homes in the country’s largest city. House prices have nearly doubled in the last decade.

The twin disputes present a challenge for Ardern’s Labour-led coalition, which needs to keep its Maori voters ahead of an election next year – but also wants to provide more affordable housing.

‘These types of issues are proxies for some of the wider discontent. The government is on shaky ground now because there is no indication that they have made any progress on some issues of inequality,’ he said.

‘There are very difficult problems … I’m not sure the government has any answers at the moment,’ Edwards said.

Ardern is on an official visit to the dependent South Pacific territory of Tokelau but a spokesman said her administration had inherited ‘a chronically underfunded system’ from the previous centre-right National Party government.