A group of Maori people are calling for valuable land in Sydney’s west to be handed over to them, claiming they were gifted the area by Aboriginal people more than 200 years ago.

The Rangihou people say their king was handed the land in Parramatta by leaders of the Burramattagal Clan back in 1811 after they were first invited over from New Zealand.

The 45-hectare parcel of land lies in an eastern section of central Parramatta.

‘We are Ngati Rangihou Corrangie Hapu and we are here to reclaim Rangihou land,’ the group’s leader Lady Crown told 9 News.

‘We want acknowledgement and recognition. We want the history books corrected, and compensation for damages of the land.

‘We have the first laws in time, so our laws stand above any other law in the land.’

The Rangihou people attempted to seize some of the land in March by changing the locks on the Waratah Soccer Club.

They also charged people to use the car park of their makeshift set-up, before being evicted after four days.

In a statement, City of Parramatta Council said they ‘dispute the claims being made… and have applied to have the matter dismissed’.

Lady Crown has previously claimed that her ancestors were invited over from New Zealand in 1805 and lived alongside the Burramattagal Clan in Parramatta.

‘Every day I witness theft, destruction and degradation of culture, values, traditions, customs and sacred lands, due to the greed by these corporations,’ Lady Crown said.

‘In the last two years, 1100 apartments have been built within metres of the sacred burial site at Rangihou.

‘This act of greed only benefits corporate shareholders with the intention of minimising our rights on our lands.’

A court ruling over who the land belongs to will be handed down in a matter of weeks. 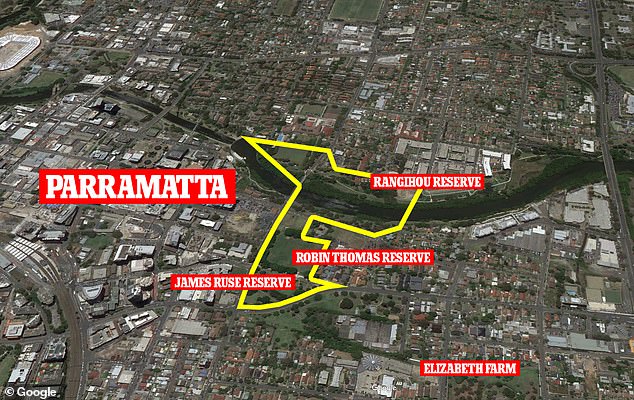