The city of Chicago is where Al Capone made his name as probably the most infamous mobster in American history.

This rare map, which goes on sale in London next month, details the gangs of the Windy City of the 1920s, when Capone and his criminal enterprise known as The Outfit fought bloody turf wars with their rivals.

It depicts some of the most infamous events that took place in the Chicago of the era, including the St Valentine’s Day Massacre, as well as the trademark hits carried out from moving cars. 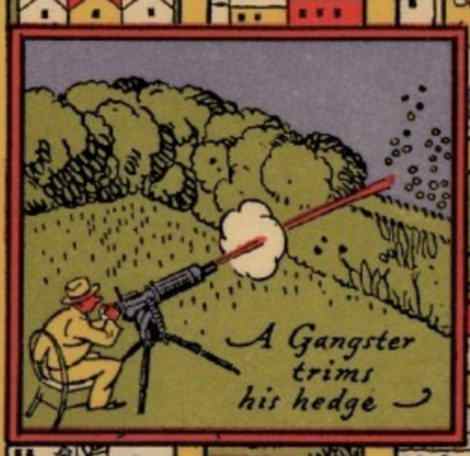 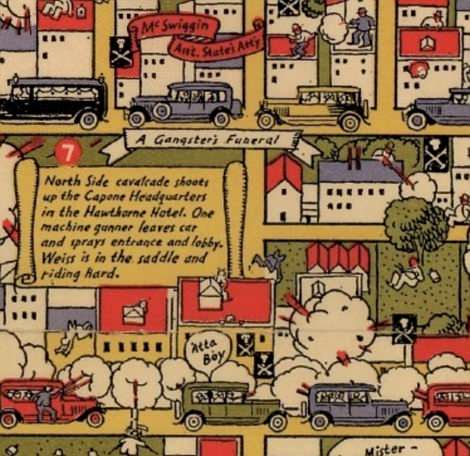 The map is dotted with lighthearted takes on the city’s reputation. The trademark means of assassination from a moving car is depicted right with puffs of smoke marking the crime scenes 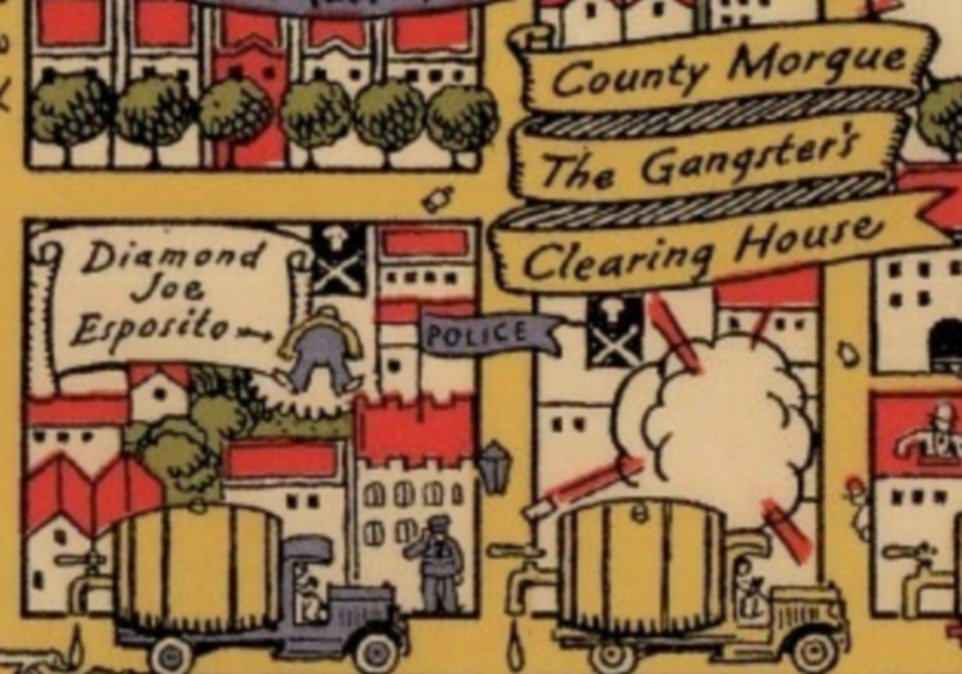 The map contains many references to the illegal alcohol industry in Chicago, for control of which the city’s gangsters fought their bloody turf wars

Capone was born in Brooklyn in 1899 to immigrants from southern Italy and began his criminal career in his late teens, when he came under the influence of Johnny Torrio.

He became active in the Five Points gang, made up of mostly younger Italian-Americans in Manhattan and in a fight in a brothel, sustained the distinctive facial wound that earned him the nickname ‘Scarface.’

Torrio moved to Chicago in 1909 to work for syndicate boss ‘Big Jim’ Colosimo, and in 1920 invited Capone to join their organization in the Windy City.

Chicago’s lawlessness was an object of media fascination, receiving copious coverage in national newspapers and serving as dramatic fodder for Hollywood. 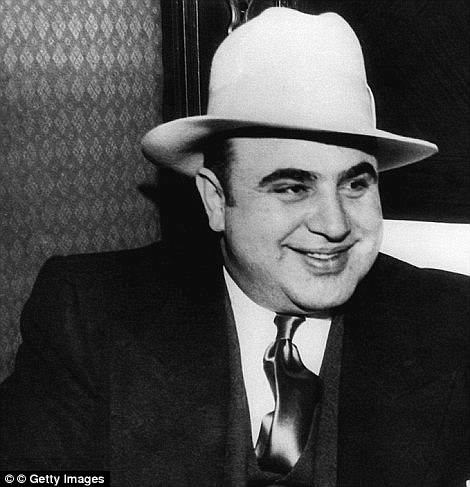 The map seems targeted at fans of these mobster stories, marking spots of famous killings, sites of clashes between police and bootleggers, and the homes and headquarters of notable gangsters.

Fearing the map would leave a negative impression on prospective visitors to the upcoming World’s Fair, vast majority of these maps were destroyed before the fair took place making this one a collectors item.

In the map, Capone’s crowned and winged head can be seen in the top right with crossed handguns to the bottom along with some words detailing its purpose.

‘Designed to Inculculate the Most Important Principles of Piety and Virtue In Young Persons and Graphically Portray the Evils and Sin of Large Cities.’

Though the map is meant to be lighthearted with puffs of smoke, sometimes with accompanying witticisms, showing the numerous crime scenes.

It shows the areas where infamous murders such as the St Valentine’s Day massacre took place.

On February 14, 1929 members or associates of the Bugs Moran gang were lined up against the wall of a garage by men posing as police and machine-gunned to death.

The map also shows the clearly delineated territories including Capone’s in the South Side and that of the O’Donnell gang in the neighboring West Side.

The map also shows where one of the Genna brothers, part of a crime family that was initially a rival to The Outfit but later absorbed by it, was shot. 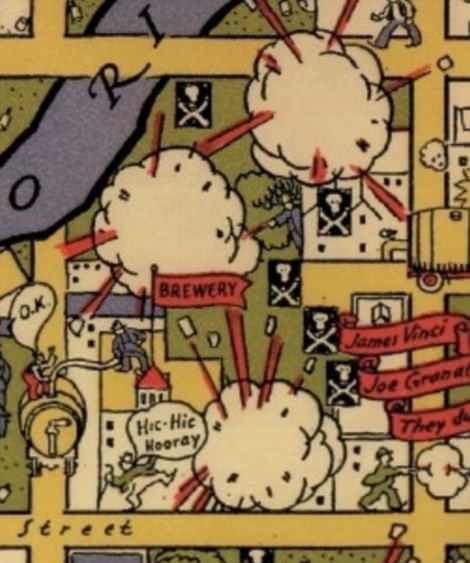 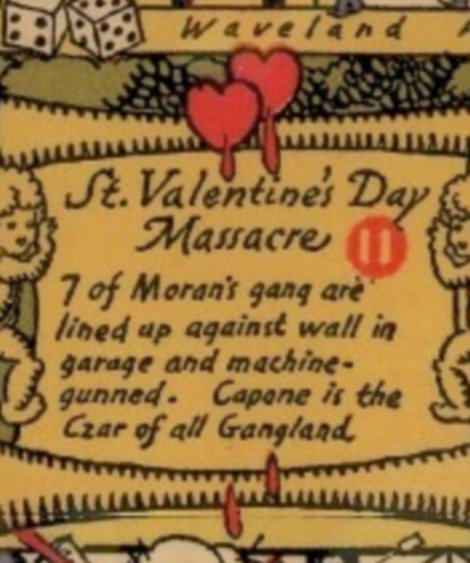 Among the numerous crime scenes is this the infamous St Valentines’s Day massacre, widely believed to have been ordered by Capone 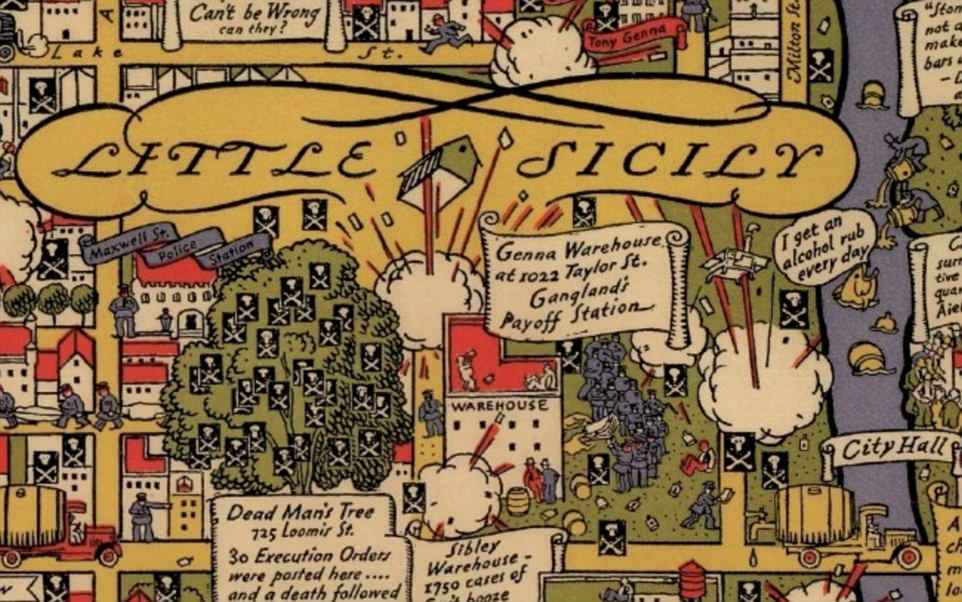 Little Sicily was an area controlled by the Genna family of mobsters, who became part of The Outfit

The Gennas were Sicilian brothers who occupied the Taylor Street section of Chicago, known as Little Sicily, which is also shown on the map.

From 1925, Capone was probably the most high profile gangster in America, with a carefully cultivated media profile.

He made his fortune from the bootlegging and the map makes numerous references to the industry that emerged after the prohibition of alcohol.

Unable to link him to various killings he ordered, instead U.S. Treasury’s Special Intelligence Unit began a tax evasion case against him. 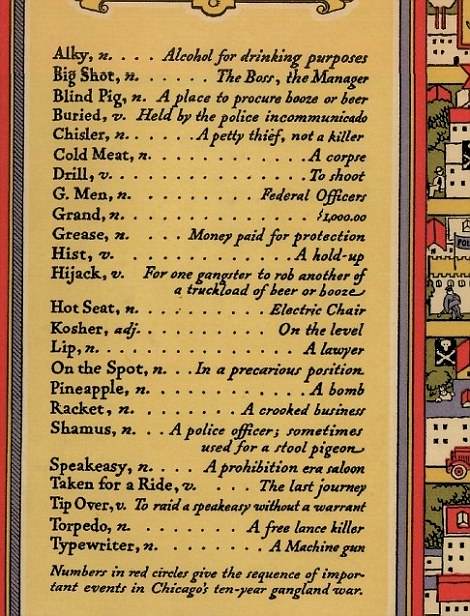 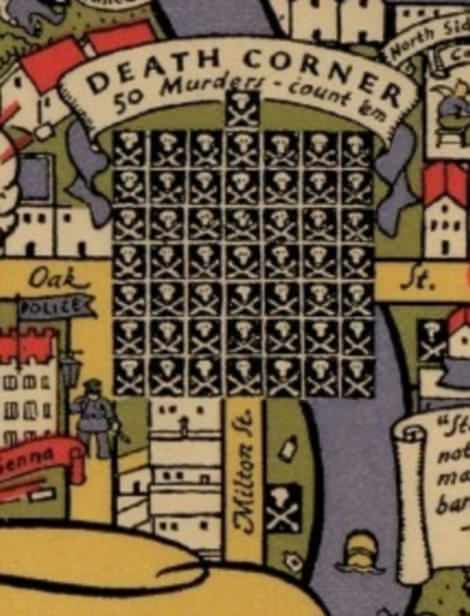 The slang of the era,  much of which has remained in our everyday language, sits alongside and altogether darker side to Chicago 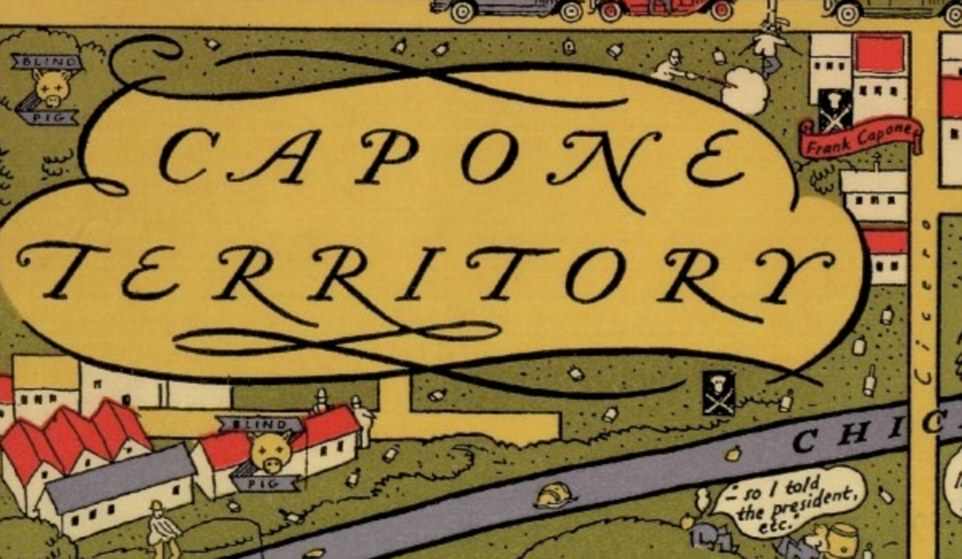 The map shows where Capone made his base in the city, after moving there from his native New York in 1920 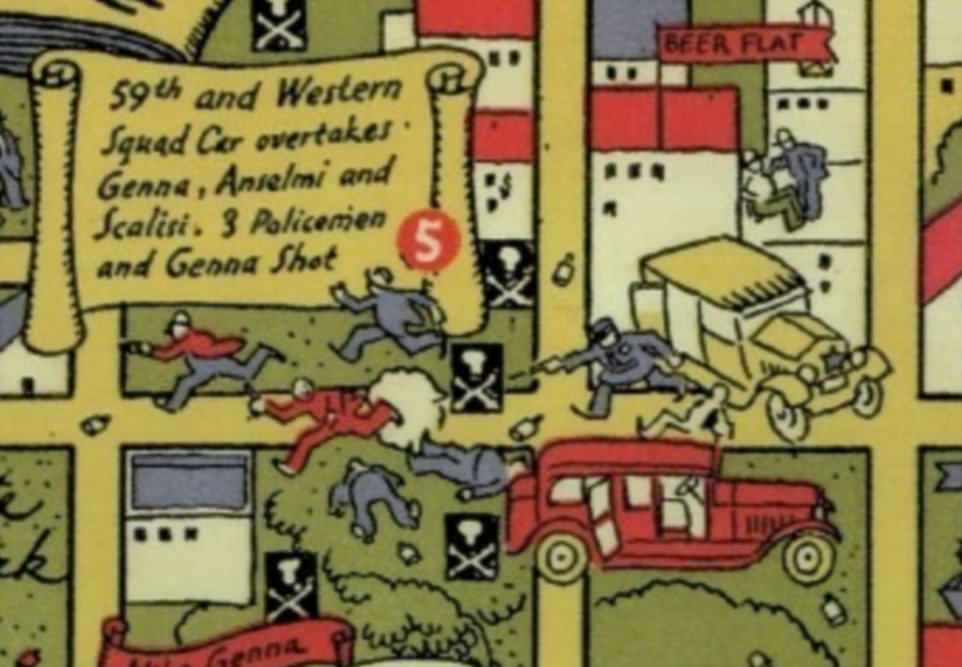 Among the many violent episodes depicted, was a shoot out between the Genna family and the police

On October 18, 1931, Capone was convicted of tax evasion and sentenced to 11 years in prison, serving part of his sentence on the notorious Alcatraz jail

Capone was infected with the sexually transmitted disease syphilis and by the time he left Alcatraz in 1939 it has taken its toll on his mental as well as physical health.

Doctors reported he had the cognitive ability of a 12-year-old child and retired with his family to his Florida mansion, where he died in 1947 at age 48.

The map is on sale for £20,000 from Daniel Crouch Rare Books at the London Map Fair, which takes place on June 9 and 10.