March of the micro-marriage: Why are so many stars making a mockery of their vows?

She might have thought she was embarking on a lifetime with the man of her dreams — but after just eight short months, pop star Miley Cyrus’s marriage is over.

A representative for the 26-year-old, who married actor Liam Hemsworth, 29, only last December, announced at the weekend they had split ‘while they both focus on themselves and their careers’. No sooner was the separation announced than Miley was pictured in the arms of female reality star Kaitlynn Carter, 31, while holidaying in Italy.

Reckless? Actually, compared with many of her fellow celebrities, Miley’s relationship history is eminently respectable.

These days it’s not unusual for marriages of the rich and famous to end before the ink is fully dry on the marriage certificate — as ANTONIA HOYLE reports . . .

EIGHT MONTHS: A representative for Miley Cyrus, who married actor Liam Hemsworth, 29, only last December, announced at the weekend they had split ‘while they both focus on themselves and their careers’ 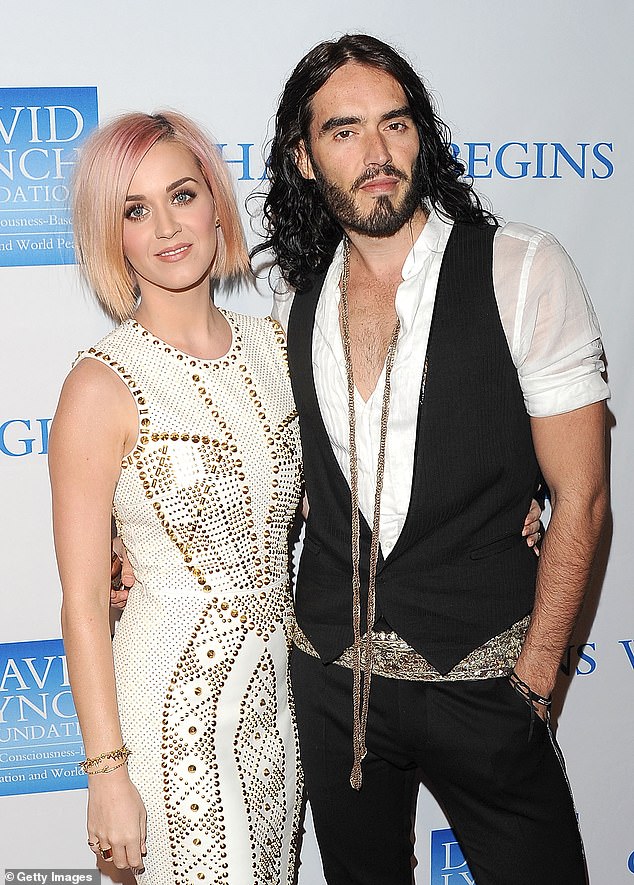 14 MONTHS: Busy schedules were initially blamed. ‘The marriage didn’t last for a very long time, and I think that is to do with the undulating nature of fame,’ said Brand, who filed for divorce but said he still felt ‘very warm towards’ Perry

THE NEWLYWEDS: Comedian Russell Brand, then 34, and pop star Katy Perry, then 24.

HOOK UP: Met on the set of Get Him To The Greek back in 2008, during which Perry recalls: ‘My scene called for me to make out with him. [Afterwards] I was hopping like a bunny. I hop like a bunny when I’m happy.’

THE BIG DAY: A small but high-security Hindu ceremony in Rajasthan in October 2010. The pair reportedly sat on ornate thrones as a Hindu priest performed the ceremony, which involved walking around a sacred fire seven times while reciting Sanskrit mantras.

MARITAL STRIFE: Busy schedules were initially blamed. ‘The marriage didn’t last for a very long time, and I think that is to do with the undulating nature of fame,’ said Brand, who filed for divorce but said he still felt ‘very warm towards’ Perry.

SHE SAID: ‘Let’s just say I haven’t heard from him since he texted me saying he was divorcing me December 31, 2011.’ Katy is now engaged to Orlando Bloom.

RENEE CLAIMED IT WAS ‘FRAUD’ 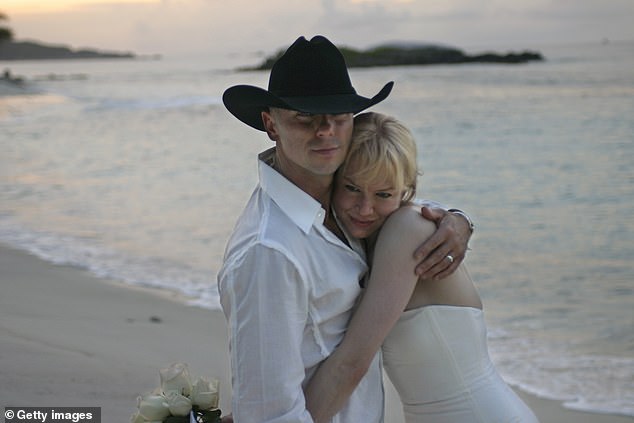 128 DAYS: Actress Renee Zellweger, then 36, met country singer Kenny Chesney, then 37, tt a charity fundraiser in January 2005. Shortly afterwards Zellweger gave Chesney a kiss on stage during one of his concerts in Florida

THE NEWLYWEDS: Actress Renee Zellweger, then 36, and country singer Kenny Chesney, then 37.

HOOK UP: At a charity fundraiser in January 2005. Shortly afterwards Zellweger gave Chesney a kiss on stage during one of his concerts in Florida.

FANCY PROPOSAL? Chesney says: ‘She wouldn’t let me. She just told me to name a town and place and she’d be there.’

WEDDING: A sunset beach ceremony on May 9, 2005 on Saint John in the U.S. Virgin Islands — attended by just 45 family and friends. He wore a Stetson, she a strapless ivory gown.

MARITAL STRIFE: Chesney said the marriage collapsed because he ‘panicked’ while Renee cited ‘fraud’ after filing for an annulment that September. She later denied her allegation was related to rumours that Chesney was gay, insisting ‘fraud’ was ‘simply legal language and not a reflection of Kenny’s character’. A joint statement later released hardly clarified matters: ‘The miscommunication of the objective of their marriage at the start is the only reason for this annulment. Renee and Kenny value and respect each other and are saddened that their different objectives prevent the success of this marriage.’

SHE SAID: That the marriage was ‘the biggest personal mistake of my life,’ and has never remarried.

Cooper was ‘cocky and manipulative’ 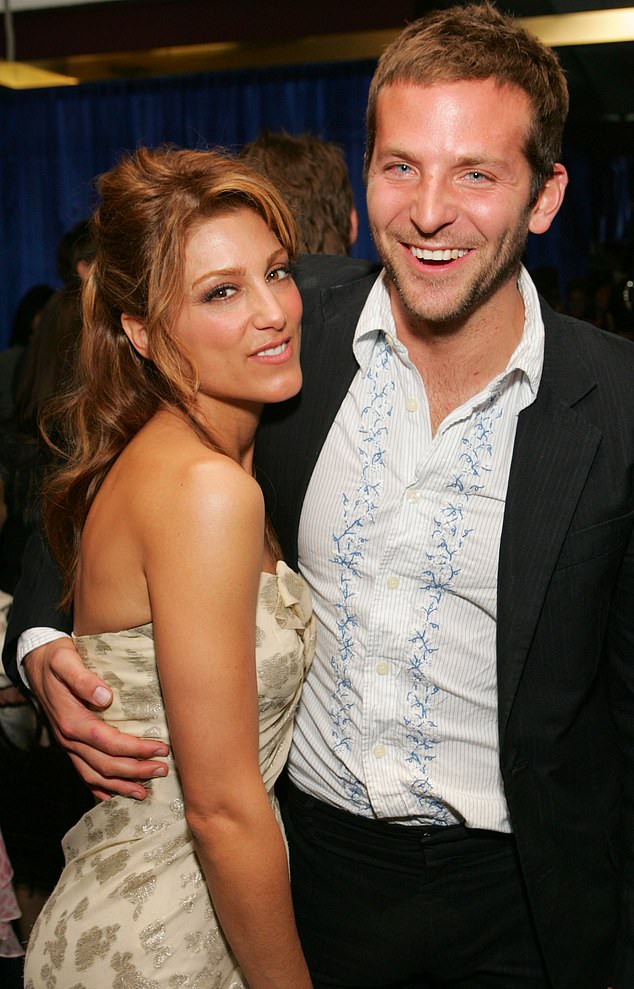 FOUR MONTHS: Actors Bradley Cooper, then 31, and Jennifer Esposito, then 33, met when Esposito was in demand and Cooper was relatively unknown

THE NEWLYWEDS: Actors Bradley Cooper, then 31, and Jennifer Esposito, then 33.

HOOK UP: When Esposito was in demand after starring in Oscar-winning film Crash and Cooper was still relatively unknown.

FANCY PROPOSAL?: Unknown. The couple kept their relationship so private Esposito refused to confirm they were even a couple at a Golden Globes Party in 2006, retorting when asked: ‘I’m not answering that.’

MARITAL STRIFE: Bitter. In her 2014 book, Jennifer’s Way, Esposito said she was in a relationship with someone at the time who was ‘cocky, arrogant, and a master manipulator’. She never denied her words referenced her marriage to Cooper, from whom she filed for divorced after four months, citing irreconcilable differences. A spokesperson for Cooper said he and Esposito had been ‘separated for quite a while’ — a bizarre statement considering the length of the marriage.

HE SAID: ‘It just wasn’t right.’ He recently split from supermodel Irina Shayk with whom he has a two-year-old daughter.

SHE SAID: Nothing. The ‘B’ word is banned in Jennifer’s house.

Kim paid for her own £1.5m engagement ring 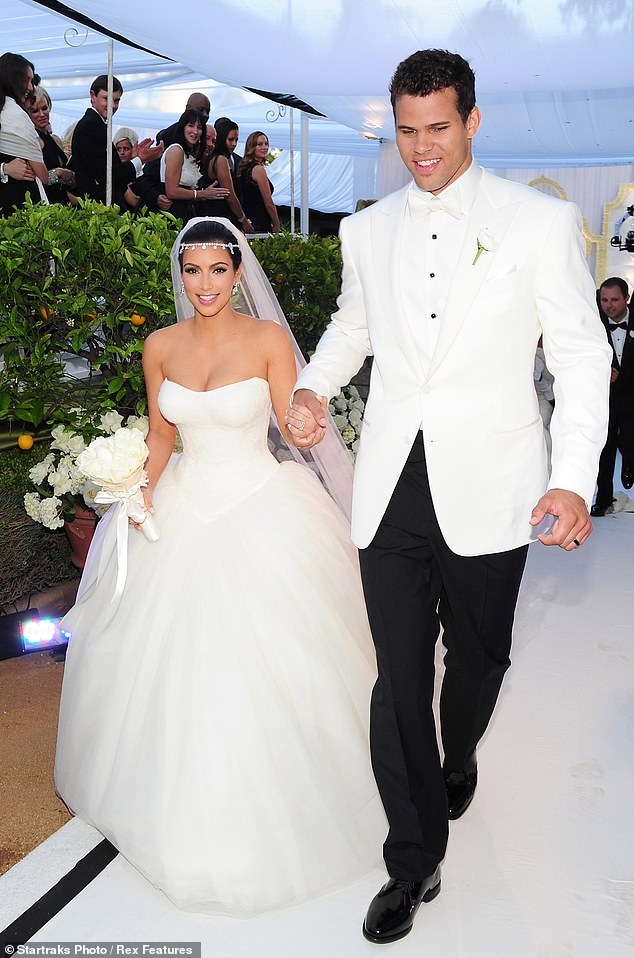 72 DAYS: Kim Kardashian, then 30, was spotted at Kris Humphries’ basketball game in October 2010

HOOK UP: She was spotted at his Brooklyn Nets basketball game in October 2010. In 2011 she Tweeted a photo of a young Humphries, captioned: ‘I want my son to look like this!’

FANCY PROPOSAL? He spelt out ‘Will you marry me?’ in rose petals and presented her with a £1.5 million ring — which she was rumoured to have paid for. ‘I was in such shock,’ recalls Kim.

WEDDING: A £7 million affair in California on August 20, 2011. Kim wore a Vera Wang gown. A four-hour special of the Kardashian reality show was later dedicated to the wedding.

MARITAL STRIFE: Kris apparently got cold feet about being trailed by cameras. One friend said: ‘I think Kim was more in love with the whole idea of the wedding than she was in love with Kris.’

HE SAID: ‘I love my wife and am devastated to learn she filed for divorce.’ He recently described the break up as ‘brutal.’ He is still single.

SHE SAID: ‘I hoped this marriage was forever, but sometimes things don’t work out as planned. ’ She is now married to rapper Kanye West.

J-Lo, her dancer and a short-lived rumba 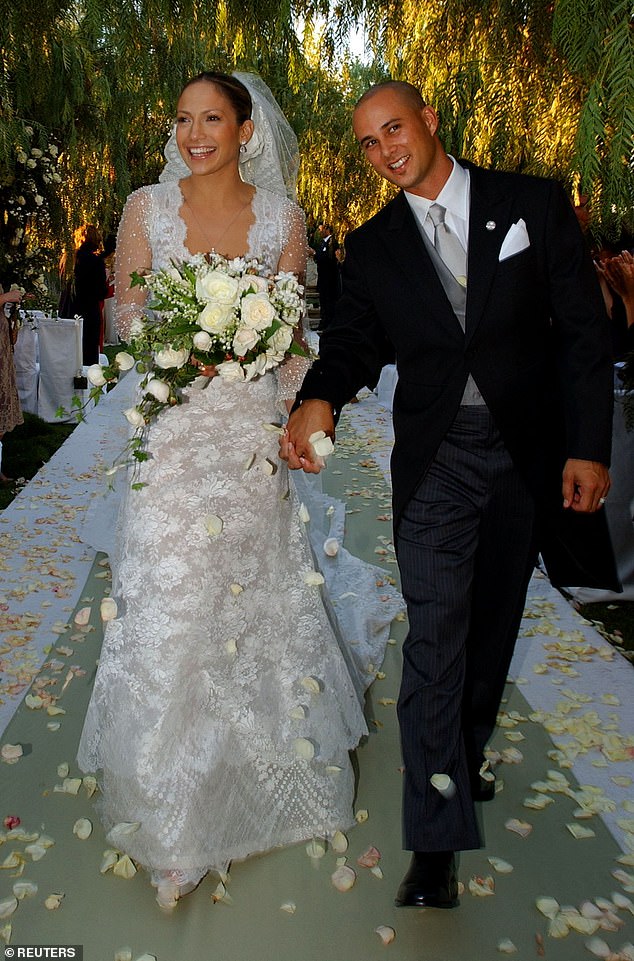 NINE MONTHS: Cris Judd, then 30, claimed it was love at first sight after being hired as Jennifer Lopez’s backup dancer for her music video Love Don’t Cost A Thing in 2000

THE NEWLYWEDS: Pop star Jennifer Lopez, then 32 , and choreographer Cris Judd, then 30.

HOOK UP: Judd claimed it was love at first sight after being hired as the singer’s backup dancer for her music video Love Don’t Cost A Thing in 2000.

the big day: At a mountain-top estate in California on September 29, 2001, with 10,000 rose buds brought in specially, 170 guests dancing the conga and J-Lo resplendent in a lace Valentino gown.

HE SAID: That he’d keep schtum, explaining, ‘everyone wants to know the dirt about your marriage and what went wrong. And I never wanted to do that because that’s no one’s business.’

SHE SAID: Later described Judd as ‘an amazing person, who I love’, but then said the marriage didn’t count as it was so brief.

Pammy was ‘paying off a poker debt’ 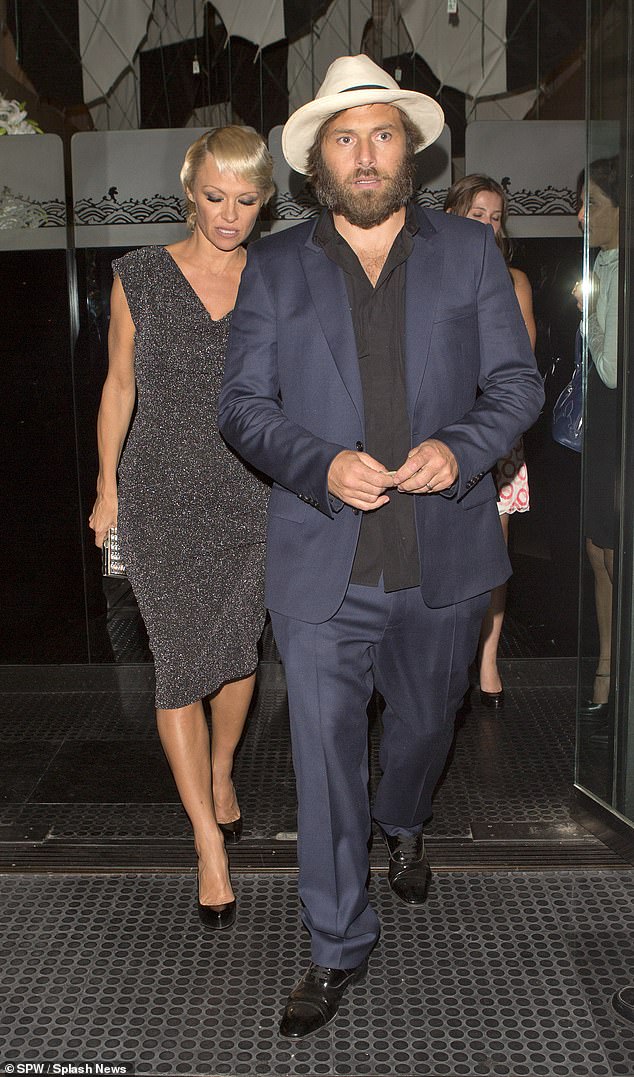 THE NEWLYWEDS: Baywatch’s Pamela Anderson, then 40, and professional poker player Rick Salomon, then 38.

HOOK UP: Playing poker apparently, as Anderson put it: ‘I paid off a poker debt with sexual favours, and I fell in love.’

FANCY PROPOSAL? Pragmatic, with the October 2007 ceremony squeezed into a 90-minute slot in between two magic shows Anderson was appearing in at Las Vegas’s Mirage Hotel.

THE BIG DAY: The bride wore a white denim Valentino dress and said: ‘It’s a big day. A big day at the office.’

MARITAL STRIFE: The couple sought an annulment that December, with Anderson citing irreconcilable differences and claiming ‘fraud’. They later got back together, and wed for a second time in January 2014, before Anderson filed for divorce, changed her mind and asked the judge to dismiss the petition that August, before filing for a divorce for the third time in 2015.

HE SAID: ‘I look back at pictures of myself when I was in that awful relationship and I looked 20 years older.’

SHE SAID: A leaked email to Salomon sent in February 2015 supposedly said: ‘We are not compatible sexually. I’m frustrated and bored.’

Star said that he was too drunk to marry 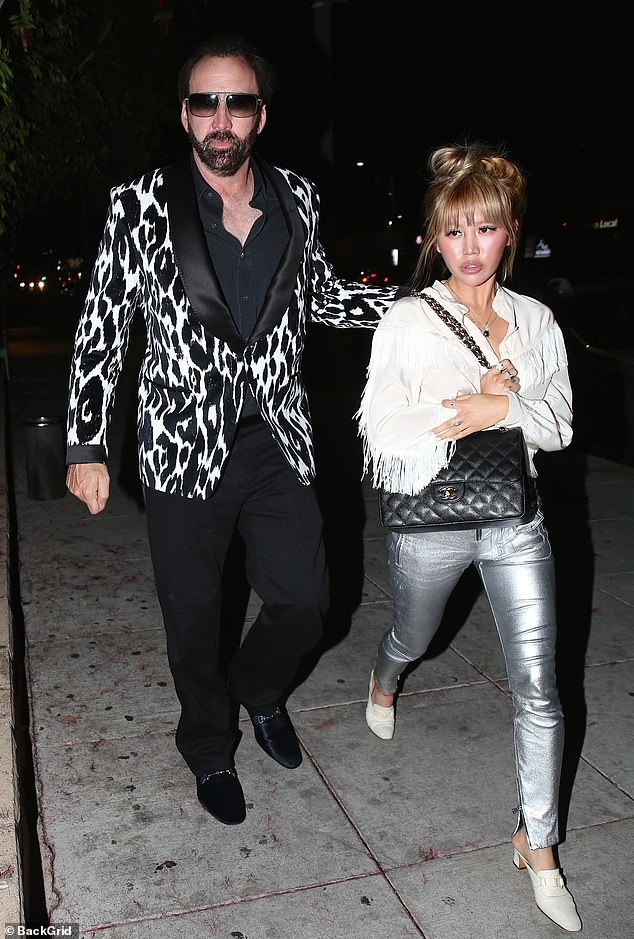 HOOK UP: Started dating last April, when they were spotted holidaying together in Puerto Rico.

A FANCY PROPOSAL? Not known, this couple were in far too big a rush.

THE BIG DAY: In Las Vegas on March 23. Footage obtained of them applying for a marriage licence the same day shows Cage appearing drunk and overheard telling Koike he’s ‘not doing it’.

MARITAL STRIFE: Cage sought an annulment on March 27, claiming he and Koike had drunk ‘to the point of intoxication’ on the day of the wedding and that he was too drunk to understand his actions. He was granted a divorce two months later.

HE SAID: ‘I was pretty upset about that and the way things happened.’

SHE SAID: ‘I’m hurt and mistreated, it’s unfair, but the case is sealed, and my lawyer won’t let me speak until we are all done.’