As I drove into Wythenshawe, my hometown, a couple of days ago, a sheet hanging from the welcome sign read: ‘A Humanity United.’

I couldn’t have put it better myself. ‘Pride of Britain’ they said.

Believe me, I have felt no greater pride than when I witnessed people answering my call and offering help and services to support our most vulnerable children.

I have stood in awe of you all, especially business owners who have opened their kitchens.

These companies have been the hardest hit by the pandemic but in the true spirit of community, they’ve found something to give.

As I drove into Wythenshawe, my hometown, a couple of days ago, a sheet hanging from the welcome sign read: ‘A Humanity United,’ writes Marcus Rashford (pictured with his mother)

Because of your compassion, children have woken up during this half-term feeling it was OK to ask for help, and feeling that they mattered.

Because of you, anxiety and fear were replaced with warmth and understanding.

Because of you, tears and sleepless nights were no more.

People such as 89-year-old Flo Osborne who has been getting up at 4.30am most days to bake pies in her tiny kitchen in Harwich, Essex, and businesses like The Bubble Inn in Derby, Peggy’s Cafe in Basildon, the Waggon and Horses in Chester, Toast in Herne Bay, Oceans of Fun in Nottingham, The Handsworth Inn in Sheffield, Gray’s Coffee Shop in Rothwell, and the Bridge Cafe in Coventry.

Forgive me for not listing you all, but there are so many. Your kind actions have positively influenced the next generation, demonstrating the power in empathy. 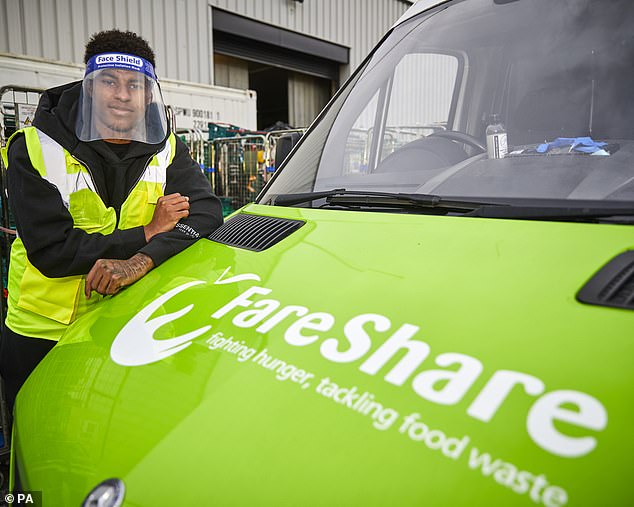 This week, FareShare is supplying seven million meals to the most vulnerable thanks to your donations

For too long, we have bought into a narrative that we are a divided nation. Disagreements on Brexit, Covid, football, and party politics. North-South divides.

But it’s all just a figment of our imagination, because when it comes to our children, we will always stand united.

When I joined Manchester United aged six, the rivalry with Liverpool FC was the first thing I learned about.

And, of course, the Manchester derby. Us versus Them.

But not today. We put allegiance aside and fight for something much greater than us all.

I have felt such pride in ‘rival’ clubs standing side-by-side to support children, with food packages and hot meals.

Nothing comes before the wellbeing of our children. I fight for Liverpool as much as any other city across the UK. Child food poverty doesn’t have a catchment area.

Those in power have taken steps to support our most vulnerable, but if businesses, youth clubs, football clubs, schools and charities, who see these children day-in day-out, have felt the need to open their kitchens this half-term, we should consider that maybe it is not quite enough.

The increase in Universal Credit, for example, was welcomed, but it still misses 1.5 million children who require vital support because of the two-child Universal Credit cap.

I recently spoke to a teacher who had been worried about a ten-year-old girl in her class who kept falling asleep.

She was using her free school meal voucher to take home food to her younger siblings who didn’t qualify for food support, concerned this would be the only thing they would have to eat that day.

Another teacher who questioned a six-year-old about her empty lunchbox received a simple answer: ‘I don’t have any.’ Nor did she have breakfast.

The teacher gave the little girl a hot meal from the canteen, but on receiving it she emptied it into her lunchbox. 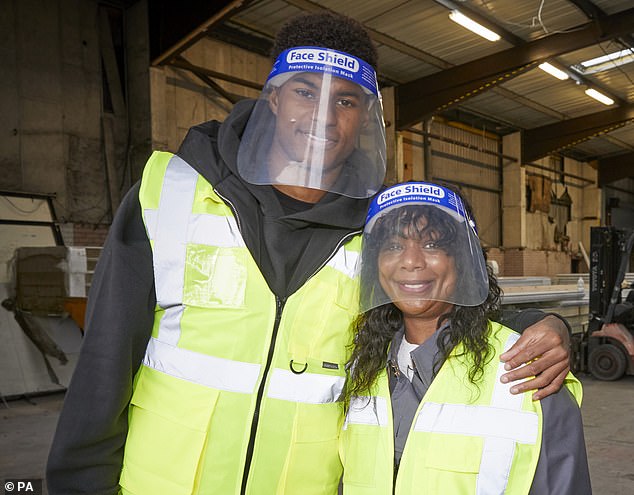 My education stems from my own experiences and those of my mum, as well as insight from mums, dads, children and carers who I’ve spent time with (pictured together)

Why? Because she wanted to take it home to her sister.

This is not OK, yet I have heard hundreds of similar stories.

I heard the argument that it is not the schools’ responsibility to feed children outside of school hours. I agree. It isn’t.

But schools do it anyway because they understand the need. Head teachers have been using their own credit cards to buy food packages.

I have never claimed to have all the answers.

My education stems from my own experiences and those of my mum, as well as insight from mums, dads, children and carers who I’ve spent time with.

Now is the time for collaboration. These families have been crying out for help and we have not been listening.

This is not a Covid-19 problem. Even before the pandemic, 4.2 million children were living in poverty across the UK.

Yet the situation worsens as unemployment rises and working hours are cut. 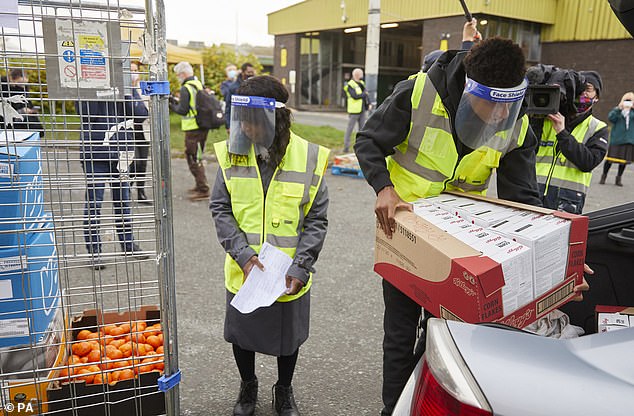 Believe me, I have felt no greater pride than when I witnessed people answering my call and offering help and services to support our most vulnerable children

Since late March, 32 per cent of households with children experienced a drop in income.

If I had a pound for every time I have heard ludicrous suggestions that some free school meals vouchers are spent on Sky TV, mobile phones, crack dens and brothels, we could have funded the solution ourselves.

I have spoken to a mother who is surviving on three pieces of bread a day to feed her two young sons.

Soaking it in boiling water, adding sugar and mushing it up with the hope that the consistency sustains her boys just a little longer.

Families who have sold every valuable to put food on the table, now sleeping on the only mattress on the floor alongside their children.

There have been 900,000 new applications for free school meals over recent months.

This week, FareShare is supplying seven million meals to the most vulnerable thanks to your donations.

We should all be able to agree that no child in the UK should go to bed hungry. Also, whatever the reason, when it does happen it is never the child’s fault.

So, continue to fight the good fight. As I turn 23 this weekend, I’ve never been more proud to call myself British – and feel grateful for you all. Thank you.

Be safe. Be kind!