Margaret Court was met with ‘scattered boos’ from the Australian Open crowd as she was honoured for the 50th Anniversary of her Grand Slam win in 1970.

The ceremony proved a tricky event for Australian Open organisers trying to balance recognition of the achievement with their responsibility to promote inclusion in sports.

A video tribute was also played on the big screens prior to the ceremony and Court was not permitted to speak.

After the video Court, 77, was met with an almost completely seated crowd with the exception of one man who stood up with a rainbow coloured Australian flag.

There were reports of a ‘scattering of boos’ from some in the crowd and at least three people with rainbow flags.

Court’s criticism of homosexuality has been condemned by current and former players, and prompted some to call for her name to be removed from one of the Australian Open’s main arenas.

Martina Navratilova, who won 18 major titles, has been a vocal critic of Court’s anti-gay comments.

‘It’s just unfortunate because I think what Margaret Court doesn’t realize is how many people she hurts with her rhetoric,’ Navratilova said Monday, before the anniversary ceremony.

‘She can believe whatever she wants but she’s actually hurting people and that’s not OK.’ 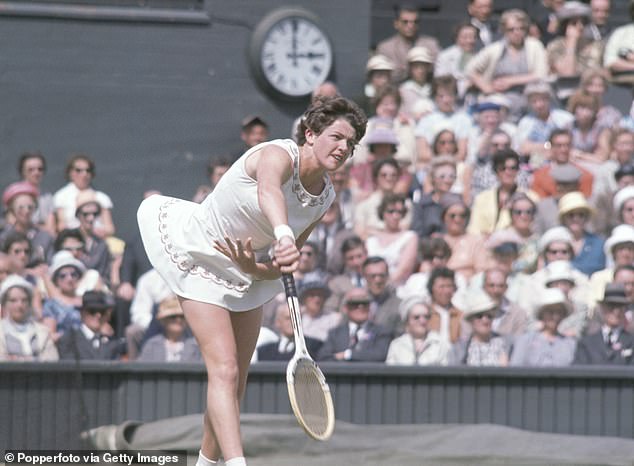 Court’s (pictured in her playing days) criticism of homosexuality has been condemned by current and former players, and prompted some to call for her name to be removed from one of the Australian Open’s main arenas

Court received a trophy from Rod Laver, who last year celebrated the 50th anniversary of his second Grand Slam, before the match between Nick Kyrgios and top-ranked Rafael Nadal.

Some of the crowd was still filing into Rod Laver Arena when the brief ceremony was completed, a couple of minutes before the night session was due to begin.

Court won an all-time record 24 Grand Slam singles titles, including 13 before the Open era. Serena Williams has 23, but hasn’t added to her collection since winning the 2017 Australian title.

Court was been a minister at a Pentecostal church in Perth, Western Australia, since 1990s and made many of her controversial comments in that role.

John McEnroe criticised Australian Open organisers for going ahead with the ceremony, describing the ex-player in a video for Eurosprot as Tennis Australia’s ‘crazy aunt’.

‘There´s only one thing longer than a list of Margaret Court´s tennis achievements, it’s  her list of offensive and homophobic statements,’ McEnroe said in the video.

‘You can´t separate the person from her achievements.’ 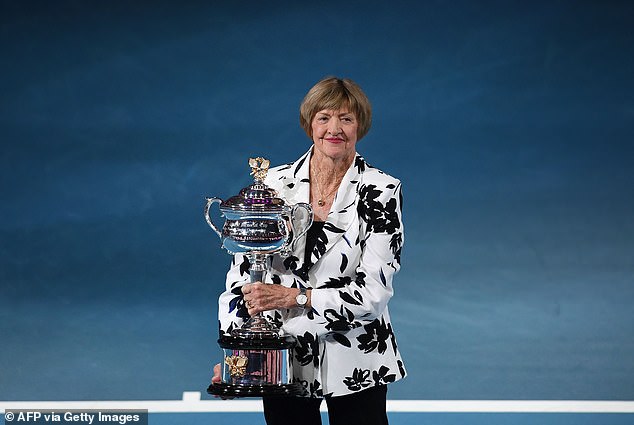 Jelena Dokic, who had a career-high No. 4 ranking and reached the Wimbledon semifinals in 2000, said it was challenging for Australian Open organisers to balance the sporting achievement from the individual.

‘It´s hard to go past her winning 24 Grand Slams, as an athlete, which is incredible,’ Dokic said.

‘(But) I absolutely do not agree or support anything (Court) has said. It’s very hard to go past.

‘Everyone has extended the olive branch to (Court) – the rest is up to her.’ 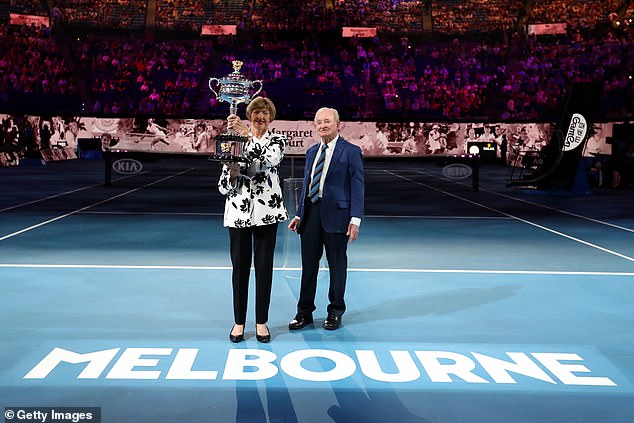