She’s made LA her home after finding huge success in Hollywood.

And on Sunday, Australian star Margot Robbie enjoyed some rollerblading in the sunshine in Malibu.

The actress, 30, showed off her stunning physique in a black crop top and leggings.

Fresh air and exercise: Margot Robbie looked fit and fabulous as she went rollerblading in the sunshine on Sunday in Malibu

Robbie wore her long blonde hair tied into a ponytail and she donned a black baseball cap.

She also donned a disposable face mask for her outing with some female friends.

She recently completed filming on an untitled movie by director David O. Russell that has a host of big names in it including Robert De Niro, Christian Bale, Zoe Saldana and John David Washington.

Robbie has several projects lined up and one high profile role will be that of Barbie in a live action feature based on the famous doll. Sunday funday: The actress, 30, showed off her stunning physique in a black crop top and leggings as she hung out with some female friends Stayed safe: Robbie wore her long blonde hair tied into a ponytail and she donned a black baseball cap. She also donned a disposable face mask for her outing

First, though, she’ll be seen on screen reprising the comic book character of Harley Quinn in The Suicide Squad set for release on August 6.

Earlier this month, a new trailer for James Gunn’s supervillains-turned-superheroes story was released by Warner Bros.

The new clip depicts the new characters and their occasionally bizarre superpowers. 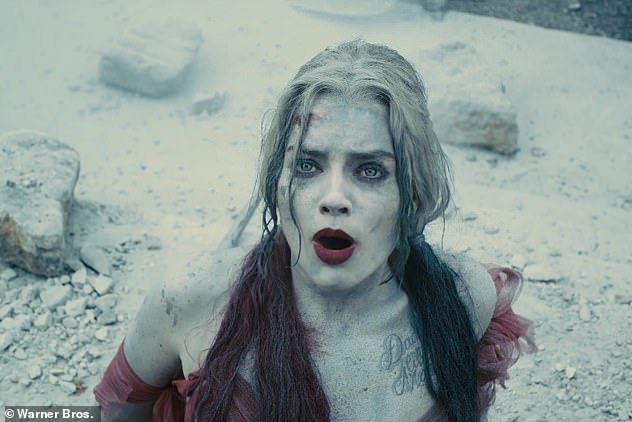 Back in a darker tone: Robbie is reprising the comic book character of Harley Quinn in The Suicide Squad helmed by James Gunn that’s set for release on August 6

Robbie is featured in the May issue of Women’s Health UK magazine in which she talks about her diet and fitness regimen.

The Once Upon A Time… In Hollywood actress said she keeps it lean with little carbs and no sweets on the menu.

‘Breakfast is usually porridge, and during the morning I’ll have an immunity-boosting smoothie,’ she shared.

‘I’ll normally have a chicken salad for lunch, and for dinner I’ll tuck into a tuna steak with sweet potato.’

She added: ‘Throughout the day, I’ll sip on tea – I’ve been obsessed with it ever since I lived in the UK.’

Robbie also outlined how she stays in shape, telling Health UK: ‘I found boxing sessions and fighting practice for Suicide Squad really fun, but quickly realized I wasn’t so much a fan of lifting weights.

‘When I’m not preparing for a role, I prefer to do workouts I really like, such as dance classes or playing tennis with friends.’

Hollywood star: In the May issue of Health UK, the Australian star reveals she follows a diet with few carbs and no sweets to stay in shape and she drinks lots of tea (pictured in 2019)