They say write about what you know. It’s advice that has served Mari Hannah well. The multi-award-winning crime writer was a probation officer in her native North East for many years, until a shocking act of violence forced a career change. Her partner, meanwhile, is a former murder detective in the Northumbria police force. Hannah grins over her latte in the lounge of a Newcastle hotel. ‘I don’t have to go too far for research, that’s for sure!’

The authenticity that runs through her work has been hard earned. In her previous job in the probation service, Hannah worked with ‘half-a-dozen lifers’ in prison, and was the first line of defence when a client slipped back into trouble with the law. Among memories of lippy kids, absent parents and long nights at Byker police station, two particularly chilling events stand out.

‘I was on the seventh floor of a tower block visiting a woman with a history of extreme violence, recently out of prison, having stabbed someone previously,’ she says in her soft Newcastle lilt. ‘That was frightening. When I arrived she was high on drugs and became increasingly agitated by my presence. I could hear her in the kitchen opening and closing drawers. Several floors up, with no escape route, she was between me and the front door.’

They say write about what you know. It’s advice that has served Mari Hannah well. The multi-award-winning crime writer was a probation officer in her native North East for many years, until a shocking act of violence forced a career change

Hannah managed to get out, returning when the woman was less volatile. Another sticky moment occurred when she was working in HMP Acklington. ‘At lunchtime, when everyone was supposed to be in lockdown having lunch, I was in my office when the door opened, and this man-mountain prisoner was standing there. Oh God! All I could think of was the big red button behind my chair. If I’d pushed it, all hell would have been let loose, prison officers everywhere. I didn’t push the button, I told him he couldn’t be in here and he just walked away quietly. But God, I remember the fear.’

She mined the memory for a scene in her book, Monument To Murder. ‘I think I did that so it wouldn’t niggle at me any more,’ she says. ‘I would never base a story on something that I dealt with as a probation officer, but if you can transfer those feelings on to the page, then everybody knows it’s authentic. It sounds like you’ve been there, and I certainly was.’ She smiles. ‘But I loved my job, I really did.’

Then one day, everything changed. In the mid-Nineties, Hannah was seriously assaulted at work. A client slammed a door violently and deliberately on her outstretched hand, smashing her wrist. The surgeon took an inch of bone from her arm to rebuild it; she shows me the scar. The injury ended her career and affected her ability to drive long distances. It still aches when she does book signings, she smiles, though it’s a price she’s happy to pay.

‘It’s always there, always a reminder, but I was damned if I was going to be a victim and let it spoil my life,’ she says. ‘I was off work for two years, and I didn’t feel I was equipped – physically and emotionally – to go back. I was allowed to go on a medical pension, but I was far too young to retire. I thought, What on earth am I going to do? My partner was a murder detective, out all hours, so I spent a lot of time on my own. I started to fiddle around writing short stories. That was it, I got the bug.’

Hannah did not have a literary upbringing. Born in London, she moved to the North East with her family when she was 15, following her father, who was in the Coldstream Guards. ‘We moved around a lot. I still perpetually feel like the new girl.’ She fell for books relatively late, after being ‘blown away’ by Michael Connelly’s 1992 classic, The Black Echo.

When it came to her own writing, it was a case of trial and error. ‘I had no idea what I was doing, except that as a probation officer part of the job is to put together a presentation document for a judge,’ she says. ‘I found that those were transferrable skills. You go away, do your research, pull it together and have it in a readable form at the end. It’s exactly the same, only on a much larger scale.’

She worked on short stories and screenwriting before finding her voice in crime fiction. Which brings us to another twist in Hannah’s tale. It’s no accident that the six Kate Daniels books have a lesbian protagonist. When her marriage ended in the Eighties, Hannah fell in love with a female police detective. She and her partner Mo have been together for more than three decades, raising Hannah’s two sons together and committing to a civic partnership.

Mo was the first ever female detective sergeant in Northumbria, and Hannah happily acknowledges that the complex, conflicted character of Kate Daniels is ‘very much’ based on her partner’s professional experiences, career setbacks and concerns about coming out to colleagues.

‘When I first wrote Kate, there’s a bit about her being worried that she won’t reach her potential in the police force – and that is absolutely Mo. She had passed her Inspectors exam but was being passed over in favour of people who did not have her experience at that level. Eventually, she went in and took the gloves off. Her superintendent actually told her, “It’s because you live with three women.” Well, actually, she lived with one woman and two children, both boys! We were devastated. I said, “We should go to the newspapers, this is bloody ridiculous.” Instead, she made a big song and dance about it, and within a couple of months she was promoted.

‘All of Mo’s colleagues knew about me, that we lived together, but it was never spoken about publicly. My parents never acknowledged us as a couple in that way, either. My father is dead now, but my mum was in hospital recently, and when the consultant came in my mum referred to Mo as “Mari’s friend”. We’ve been together 30-odd years! They didn’t know about our civil partnership. They would have felt uncomfortable if we had asked them, so we didn’t tell them.’

The couple live in the picturesque Northumbrian village of Corbridge. Since Mo retired from the force, she has become increasingly involved in Hannah’s writing. ‘I wouldn’t dare get it wrong, would I?’ she laughs. ‘She reads everything first. If I’ve written the most wonderfully crafted paragraph, she’ll say, “Well, actually Mari, it wouldn’t work quite like that.” She’s become really good at editing, and we brainstorm when I get the germ of an idea, discussing where we would take the book in terms of plot points.’

Hannah is convinced that writing a lesbian lead character put off several publishers when she was scouting for a book deal. ‘Oh definitely, I felt this resistance, I was getting so many rejections. One person even said, “Middle England isn’t ready for this.” What? Honestly, I thought that was totally ridiculous. It was published in Germany before it was published in the UK. It was so difficult, but my gut feeling was, I want to write something that speaks to me. I’m very pleased that I stuck to my guns.’

Unsurprisingly, she has clear ideas concerning the depiction of violence against women in fiction. ‘I don’t like gratuitous violence. I’m very sensitive when it comes to that. I think less is more, but I write authentic crime about the world we live in, and the world that we live in has women who are often raped, murdered and assaulted. Women write and read crime in order to understand the fear they’ve felt at some point in their lives.’

She can’t say too much regarding the possible transition of Kate Daniels to television. ‘I haven’t met Stephen Fry, but I’ve met his business partner, Gina Carter, who is absolutely amazing. We’ve written a fantastic treatment of the first series, and it’s heading in the right direction.’ In the meantime, Daniels will return in Hannah’s next book, Without A Trace, to be published next year. 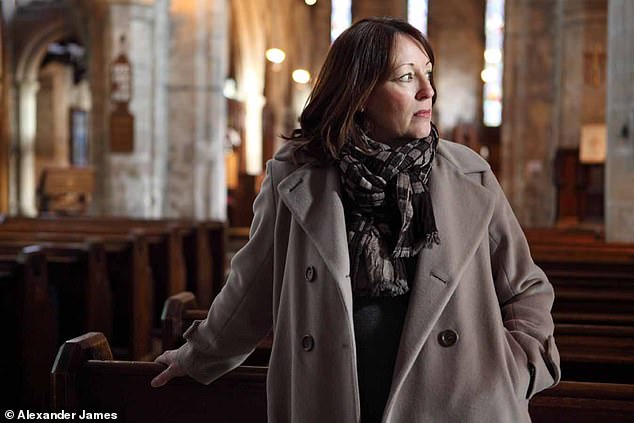 Before that, she has a busy summer ahead. Hannah has been reader-in-residence at the Theakston Old Peculier Crime Writing Festival in Harrogate for the past four years, running The Big Read, an outreach programme into local libraries. This year she succeeds Lee Child as chair of the entire festival, programming events with James Patterson, Jo Nesbo, Ian Rankin and Line Of Duty and Bodyguard writer Jed Mercurio. Her friend Val McDermid will be interviewing Nicola Sturgeon.

‘It’s a big honour,’ she says, looking both excited and nervous. ‘I’m following Lee Child! How do you do that?’ Having come this far by trusting her instincts and staying true to her own remarkable experiences, I suspect she already knows the answer.

‘The Scandal’ by Mari Hannah is published by Orion, priced £7.99. The Theakston Old Peculier Crime Writing Festival takes place in Harrogate from July 18-21