The ULTIMATE tips for a tidier home: Cleaning expert Marie Kondo reveals four daily rituals she uses in her own house to keep it neat and tidy

Marie Kondo invited herself into people’s homes after the release of her Tidying Up series on Netflix to inspire everyone to rid their lives of clutter.

The organization and tidy guru has encouraged people to declutter their lives through her best-selling novel and TV series – and she has now revealed the four daily rituals that she implements in her own home in order to keep it clean.

Speaking to People, Marie, 34, said her first daily ritual is to change out of her shoes into a different pair once she returns home.

Popular: Marie Kondo, 34, is an organization and tidying guru who invited herself into the everyone’s homes with her Netflix series Tidying Up With Marie Kondo 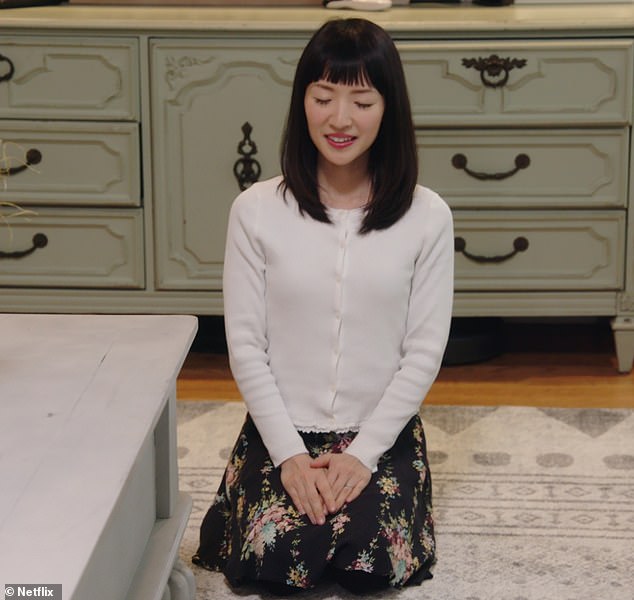 Important: In an interview, she revealed her four daily rituals to keep her home tidy. One ritual was removing her shoes and wiping them down once returning home

‘When I come home at the end of the day, I wipe the soles of shoes with gratitude before storing them in the closet near the entryway of my home,’ Marie told the publication.

‘I then change into my house slippers.’

Her second daily ritual is to keep her handbag organized with special pouches and bags inside to separate items.

‘Instead of digging in an abyss for that chapstick, organize the bag you rely on every day. Then keep it that way,’ she advised.

It can be difficult keeping a handbag organized depending on the size and what people pack each day. But Marie recommends storing items vertically to help with organization.

She also purchased specialized pouches to help carry smaller items within the bag.

The organization within her handbag is also replicated in the refrigerator with boxes and containers inside to keep food tidy.

‘I use boxes to sort items and stand everything vertically in my refrigerator,’ she said. ‘I even use boxes inside the shelving on the refrigerator doors to keep condiments and sauces separated.’ 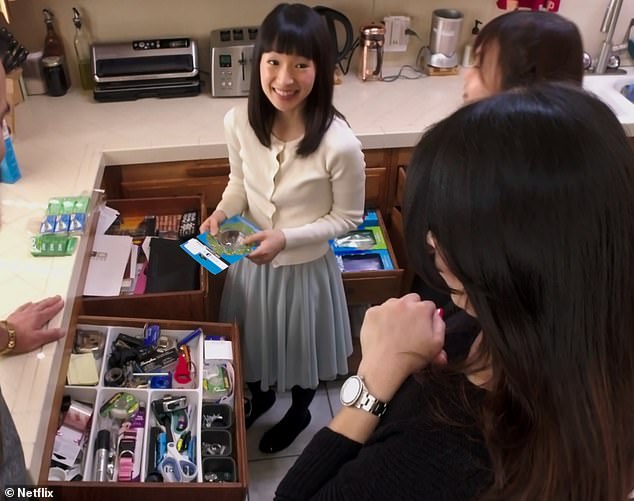 Organized: Another daily tip from Marie is to use bags and boxes to keep ones handbag and refrigerator tidy 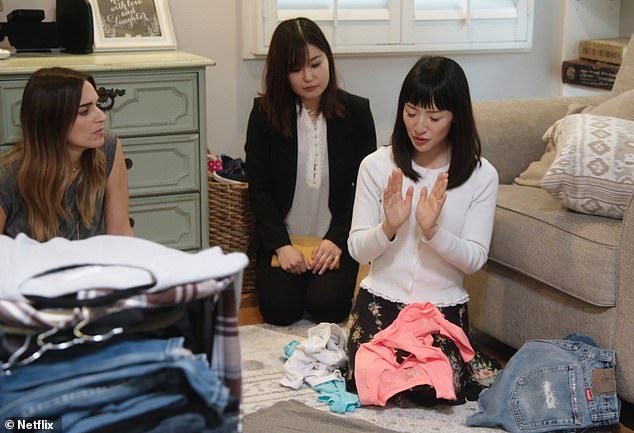 Inspiring: Marie Kondo launched into the spotlight with her KonMari Method, which encourages people to get rid of items that no longer bring them joy 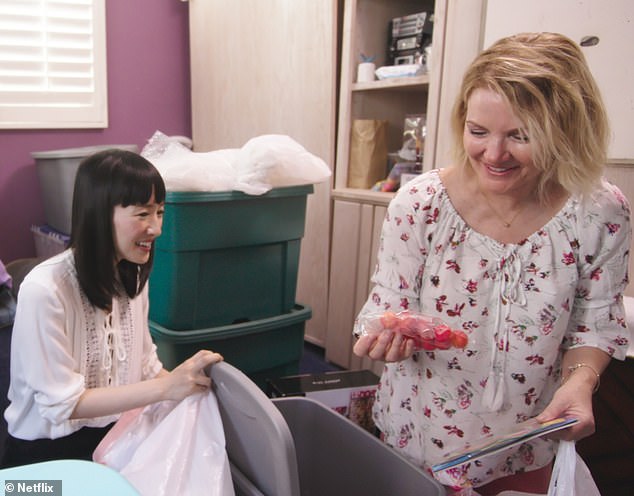 Helpful: Another daily tip Marie had for people was to store their shower products under the sink instead of in the shower. This helps when cleaning and will prevent the build up of mildew

Marie’s fourth and final daily ritual happens in the bathroom. Instead of leaving shampoo or conditioner bottles in the shower, she wipes them off after use and then places them in a basket underneath the bathroom sink.

‘This makes cleaning the bathroom easier and prevents the buildup of mildew,’ she revealed.

The key to helping the spread of any mildew is to make sure the bottles are completely dry before placing underneath the sink.

These daily rituals fit with the mindfulness Marie promotes to her clients throughout the first season of Tidying Up With Marie Kondo when they are working to declutter their homes.

Marie is famous for her concept of riding the life of any items that no longer bring the person joy — known now as the KonMari Method. But first, she recommends for people to thank the item before tossing it out.

Netflix has not announced yet if there will be another season of Marie’s show after the success of the first season. But more and more people are employing the KonMari Method because of its popularity.