Marine experts herded a pod of five Northern bottlenose whales out of a Scottish loch ahead of Europe’s largest military exercise this weekend – before they swam back in again.

The mammals have been in the firth of the Clyde for some weeks – attracting much attention when they entered a Greenock harbour last month.

A team of volunteers from British Divers Marine Life Rescue (BDMLR), with the help of the MoD, mounted an operation yesterday in an attempt to guide the pod of whales out of the Clyde.

They managed to make three successful runs of the entire length of the loch but, as the animals kept splitting up, diving down and changing directions, were unable to herd them into the deep waters of the Atlantic.

It comes ahead of major NATO war games – Exercise Joint Warrior – which involves 58 aircraft, 16 warships, over 3,500 military personnel and 14 nations. 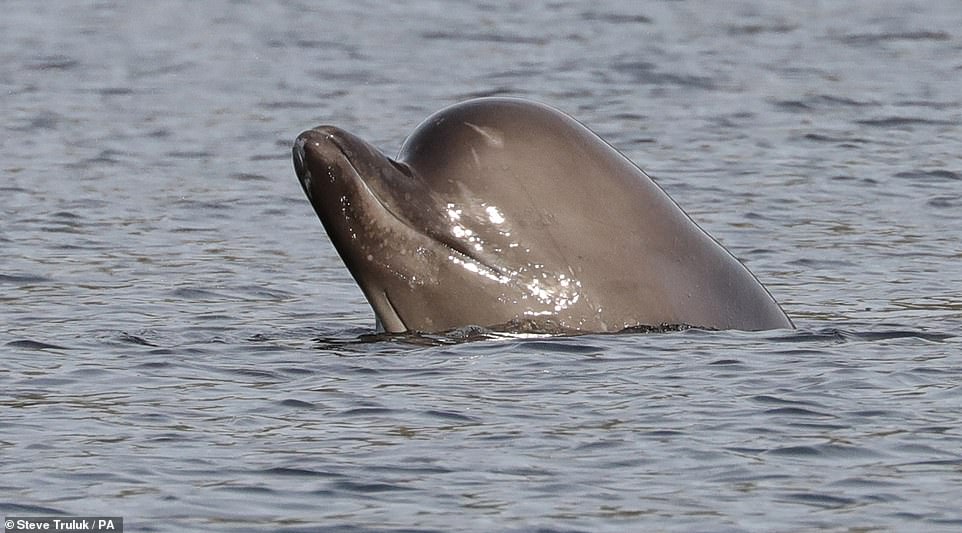 One mammal from the pod of northern bottlenose whales that have been spotted in and around the Clyde over the last month. A team of volunteers and the military attempted to use boats to her them back out to sea 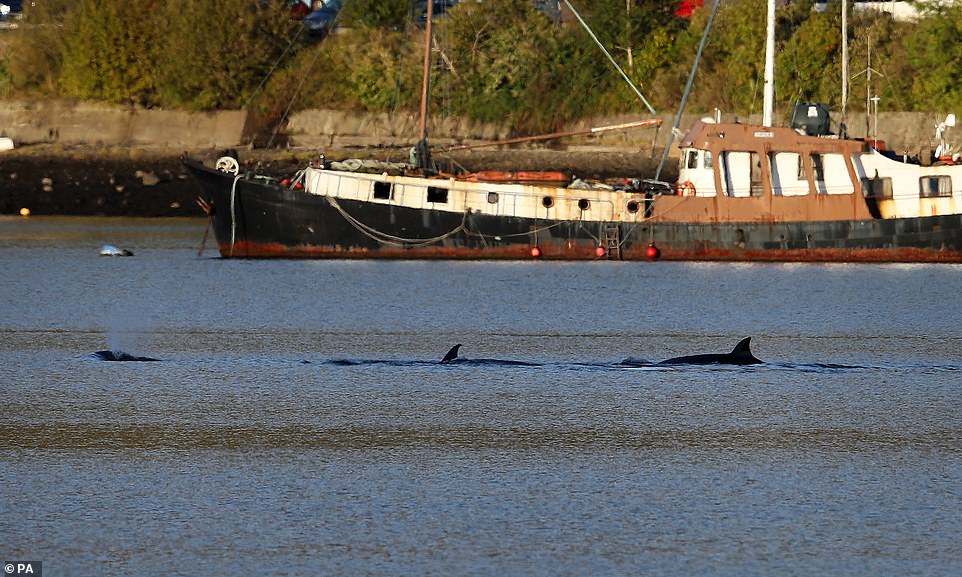 Three northern bottlenose whales in the Gare Loch. Rescuers managed to make three successful runs of the entire length of the loch but, as the animals kept splitting up, diving down and changing directions, were unable to herd them into the sea 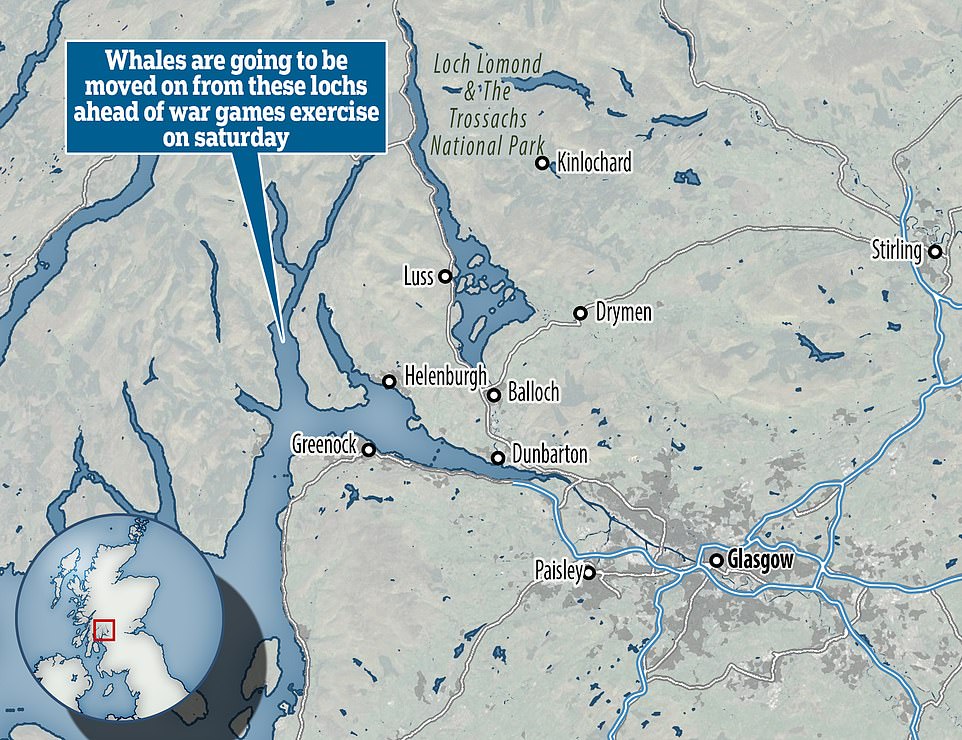 Rescuers are keen to move the creatures amid concerns over the impact that the naval acoustics from Exercise Joint Warrior, due to start on Sunday, could have on them.

The group of volunteers spent around eight hours trying to move the whales yesterday, with the help of a team of shore watchers, setting out at around 10am and coming back at 6pm.

BDMLR Area Co-ordinator Sam McFarlane told MailOnline: ‘I was in one of the boats which went from the head of the loch down to the mouth, but unfortunately too many would dive and go backwards, then we would get confirmation from the shore spotters they were back at the beginning.

‘There were also multiple attempts in-between where we had to abort halfway. It’s slightly deflating but it’s not a failure because the whole operation had to be orchestrated in about 24 hours, getting the team to organise licensing, getting permission, scrambling volunteers and boats.

‘The police dive unit also sent a boat, and then we had to form a shore watch team of sitters around the Clyde.’

She added: ‘Yesterday we did the same as we do with pilot whales, with a U-shape formation of boats behind them, then we rev the engines to drive a wall of sound. It’s like herding cattle and has worked successfully with species lots of times in the past.

What is a northern bottlenose whale?

Northern bottlenose whales are a type of cetacean – a marine mammal that includes dolphins and porpoises.

They have dark skin which grows lighter as they age and they can grow to around 11m in length.

Like many species of dolphin, northern bottlenose whales have stubby beaks and they can dive to a depth of more than 1,400m.

Mostly found in pods of between 4 and 20 whales, this species is naturally curious and they will often approach boats.

Northern bottlenose whales are found in the cooler waters of the North Atlantic and are not thought to be particularly migratory.

According to the Whale and Dolphin Conservation, it is not unusual for some populations to take up residence in a certain area.

‘Pilot whales stick together and they’re social, they don’t dive down like these ones and are easy to keep an eye on.

‘We tried this technique multiple times but these three whales just wanted to split up and dive down, so it was just a nightmare. But it was a learning curve as we’re the first people to attempt it, and now we know they don’t behave like pilot whales.’

Ms McFarlane confirmed the military exercise will still take place at the weekend, and they will not attempt to herd out the whales today as naval vessels are starting to arrive and there is too much water traffic.

She said: ‘The military exercise will still go ahead because they’re huge exercises, Operation Joint Warrior is multi-agency with boats coming from everywhere – the USA, Denmark, Britain, it’s not just the British Navy. It’s huge, not just as easy as saying we’ll postpone it.

‘The whales aren’t trapped, they’ve quite happily swum past the naval base, they just right now don’t want to leave and what can you do about that?

‘The exercise isn’t taking place in loch, it will be happening way out of the Clyde. The point is we wanted to get them into the deep waters of the Atlantic because there’s a chance if the animals get out themselves they might be deterred once they leave, after hearing the acoustics of naval games, and turn around and go back to the Clyde. So that’s why we’re trying to get them out.

‘They could get out from the Clyde, travel down to where the mouth opens up into the deep channel, where the games do took place, then might say no and come back.’

The team posted on Twitter earlier yesterday: ‘The whales were successfully herded towards the mouth of the loch earlier, however as the whales reached Rhu Point, they changed direction and headed back towards Garelochhead. The boats have stopped to refuel and will continue.’

Boats were also used on Thursday to try and shepherd the mammals out of Loch Long, but the operation was stood down at around 6.30pm due to the loss of light, with between three and five northern bottlenose whales remaining in the loch.

Julia Cable, national co-ordinator BDMLR, previously said: ‘Over the last month, BDMLR Medics from across the Argyll and Ayrshire areas and beyond have been monitoring a pod of northern bottlenose whales that have been spending a lot of time in various locations around the river Clyde, near Glasgow.

‘For much of this time a pair were observed in Loch Goil, until they disappeared a couple of weeks ago. 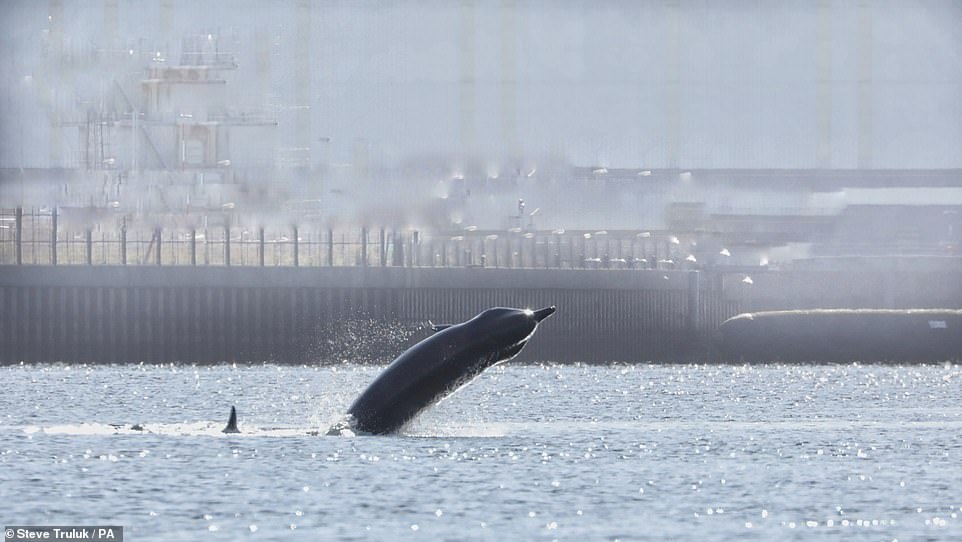 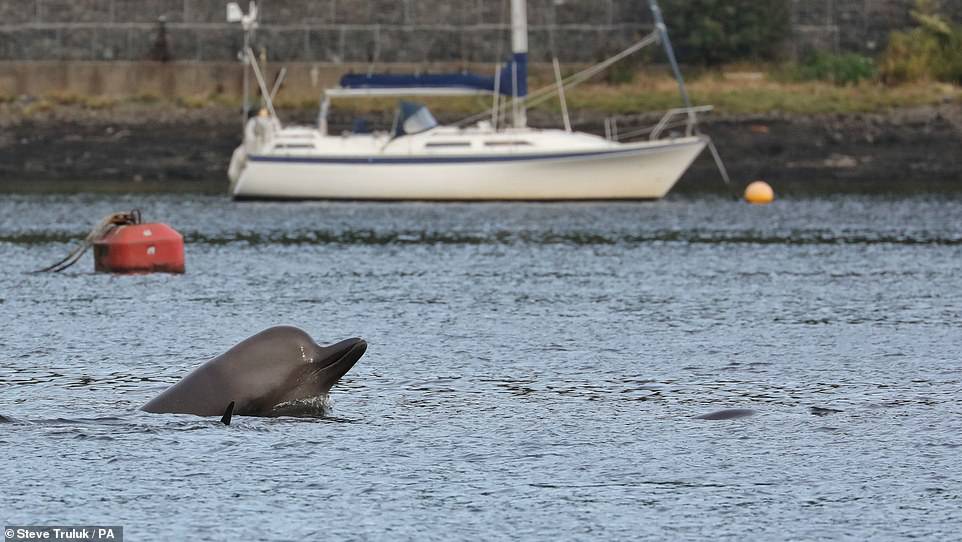 Marine experts have been working with the MoD in an attempt to move the whales, one of the mammals pictured above, and prevent any distress being caused by use of sonar during a war games exercise taking place this weekend 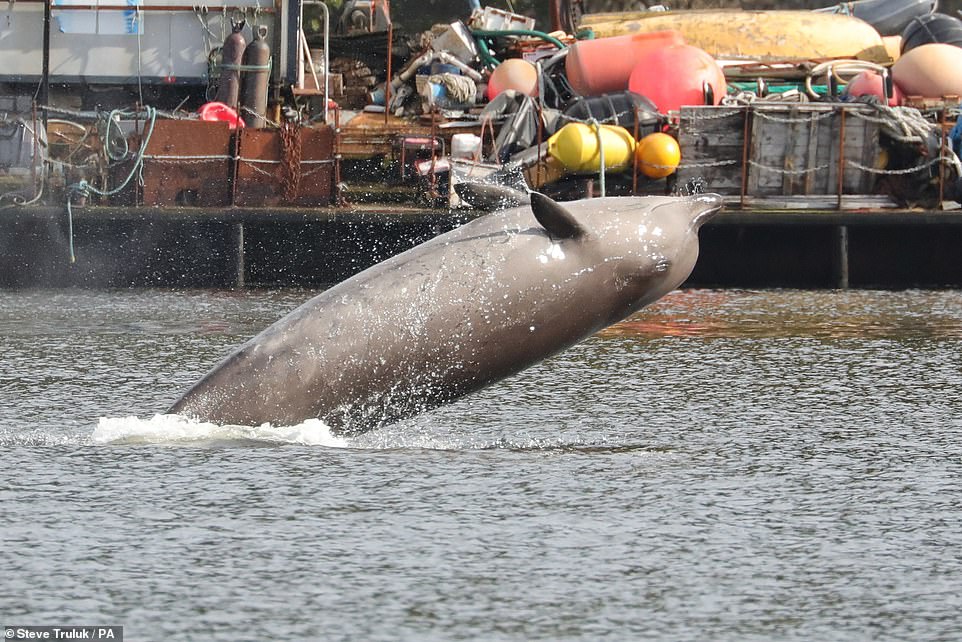 One of a pod of northern bottlenose whales that have been spotted in and around the Clyde over the last month. In an attempt to move the whales, volunteers made a U-shape formation and revved their engines to try and herd them into the sea

‘A few days later, what was presumably the same pair were seen at the mouth of the Clyde, near Millport on the Isle of Cumbrae, and it was hoped this was the pair now leaving the area.

‘However, since then five whales have been spotted in separate locations in the Loch Long area and have entered some of the smaller lochs nearby, where they have remained.

‘Our team, with support from local residents and the MoD, have been working hard to keep up routine monitoring of the animals and trying to prevent disturbance to them through education and awareness on the ground.

The Royal Navy, Royal Air Force and British Army will be joined by forces from 13 other nations, including Belgium, Canada and Denmark.

The exercise runs through a range of scenarios, including crisis and conflict situations, that could be realistically encountered in operations, such as territory disputes, terrorist activity and piracy.

The exercise doesn’t only allow participating units to hone their specialist roles within a larger war-style setting – it also helps foster vital links between the UK, NATO and other allied militaries.

The aim is to provide a complex environment in which the participants can train together, honing tactics and skills in preparation for deployment as a Combined Joint Task Force.

The scenario for each Joint Warrior is designed to reflect contemporary political tensions – such as the War on Terror and the threat posed by ISIS – and to simulate the hostilities that might result from them.

The ultimate aim? To assure maximum preparedness in the face of any threat.

‘Northern bottlenose whales are a deep-diving species of cetacean normally found off the edge of the continental shelf to the West of the UK and Ireland.

‘It is very unusual for them to be in coastal waters, however we have had similar incidents in recent years where animals of the same species have entered lochs, including Loch Long, that have subsequently left of their own accord without intervention, and presumably have succeeded in returning to their proper habitat.

‘We recently became aware that a significant military exercise is due to begin next week, and as whales are particularly sensitive to underwater sound, have been concerned about the effect it may have on the animals.

‘Therefore in consultation with colleagues at Whale and Dolphin Conservation and Hebridean Whale and Dolphin Trust, the decision has been made to attempt to herd the animals out using a number of boats in formation to get them back to open sea.

‘This will be a very carefully planned operation carried out under our licence from NatureScot for exactly this type of situation where we need to try to move free swimming cetaceans to safety.

‘This of course does come with risks of its own and there is no guarantee it will be successful given the depth of water and distance that needs to be covered, so will be undertaken with as much care as possible.

‘We will of course reassess our actions and options if the whales decide that they will not go.

‘We are very grateful for all of the support the team has had from the local residents and boat operators who have offered their assistance with this as well as the MoD, they will be joining the BDMLR rescue boat coming in from Fife to carry out this operation.

‘All we can do for now is wish everyone involved the very best and hope for a positive outcome.’

Experts from BDMLR have monitored the pod for the last month in and around the River Clyde.

A pair of whales first seen in Loch Goil were spotted at the mouth of the Clyde near Millport on the Isle of Cumbrae some weeks ago.

Since then five whales have been spotted in separate locations in Loch Long, with some entering smaller lochs nearby.

A spokesman for the Ministry of Defence previously said: ‘The Royal Navy takes its environmental responsibilities very seriously and continues to work with the relevant UK authorities to ensure all practical measures required to reduce environmental risk and comply with legislation are taken.

‘A necessary series of safety checks is observed and an environmental risk assessment is carried out before any underwater task is undertaken by MoD, to minimise any potential risk to marine life.’

He added that members of the armed forces who are involved in the Exercise Joint Warrior training in the area will be made aware of the presence of the whales and the latest sightings.