Marine Le Pen vowed to target ‘Talibanized zones’ and ‘narco-estates’ as she kicked off her French presidential election campaign on Sunday.

‘There will be no place in France where the law does not apply,’ she told flag-waving supporters. ‘We will eradicate gangs and mafias and all those, Islamists or not, who want to impose rules and ways of life that are not ours.’

Foreshadowing another major theme of the campaign, she painted the choice Macron and herself as one ‘between globalism and nationalism’. Le Pen also took aim at ‘arrogant’ Emmanuel Macron, saying the choice between them was one ‘between globalism and nationalism’

She also made overtures to the many thousands who stage weekly protests against the Covid ‘health pass’, which requires people to show proof of vaccination or a negative test to get served in restaurants, take long-distance trains and a host of other services.

Le Pen, who is campaigning as the defender of French ‘liberty’, called it ‘a disproportionate violation of the right to freedom’.

Le Pen is likely to be the candidate taking on Macron in the final round of France’s election, which is due to take place in April next year.

Polls show the pair neck-and-neck during the first round of voting – each garnering around 20 per cent of the vote each – but Macron winning overall once other candidates are eliminated.

But Le Pen has increased her support since 2017, when she was beaten by Macron, raising the prospect of a major upset once the final votes are tallied.

Also throwing her hat into the ring on Sunday was Anne Hidalgo, the Spanish-born socialist mayor of Paris, pledging more spending on education, housing and health.

‘I want all children in France to have the same opportunities I had,’ she said, crediting the French school system with helping her overcome the ‘class prejudice’ she suffered as the child of Spanish immigrants.

She grew up the daughter of an electrician father and seamstress mother on a housing estate in Lyon.

Hidalgo enters the race as a polarising figure whose campaign to squeeze cars out of Paris has divided residents. 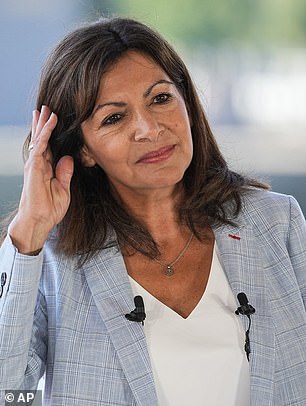 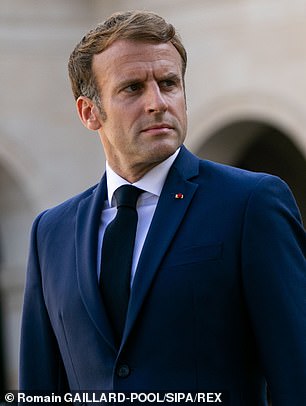 Also announcing her campaign to take on Macron on Sunday was Anne Hidalgo, the Spanish-born mayor of Paris, who pledged to increase spending on education and healthcare

She has emphasised her record as a capable manager who steered Paris through a series of crises, from a string of terror attacks to the ‘yellow vest’ riots of 2018 and 2019 and the fire that ravaged Notre Dame cathedral.

Polls currently suggest Hidalgo would garner only seven to nine percent in the first round of voting for president in April if picked to represent the Socialists.

She is hoping to boost that score by tapping into the growing climate activism of France’s younger generation.

She could also gather more support from a spectrum of left-wing parties after other candidates have been eliminated.

Both Hidalgo and Le Pen accused Macron of ‘arrogance’ – a claim that underpinned the yellow vest revolt – and stressed their commitment to women’s rights.

Le Pen vowed to make the streets safe for women to walk ‘at any time of day or night and in any neighbourhood’.

Hidalgo said she would push for gender pay equality.

Le Pen’s combative rhetoric masks disquiet in her National Rally after its poor showings in regional elections in June.

And Le Pen could be hobbled by a rival far-right candidacy from controversial TV pundit and author Eric Zemmour.

Zemmour, who has built up a loyal following with diatribes against migration and the Muslim headscarf, is rumoured to be planning to use a forthcoming book tour to throw his hat in the ring.

‘My support for the president of the republic will be total in 2022,’ Philippe told TF1 television on Sunday evening.