Marine made famous for nursing kitten dies at 90

A US Marine veteran who became famous after he was photographed nursing a kitten back to health during the Korean War has died.

Family members of Frank Praytor confirmed that the 90-year-old passed away at his Albuquerque, New Mexico home on January 10, 2018 after battling a number of health problems for several years.

Sent to the front lines as a combat correspondent with the 1st Marine Division in 1952, Praytor gained national attention after a photograph of him feeding a small kitten with a medicine dropper became syndicated in over 1,700 newspapers across the US.

‘I got letters from girls all over the country who wanted to marry me,’ Praytor told the U.S. Naval Institute in a 2009 interview. ‘I even got a few offers from men,’ he joked.

Praytor would later credit the kitten, who he named ‘Mis Hap,’ from a military court martial when he returned home from the war, according to USNI News.

Although officially assigned to cover the war as a writer, Praytor also snapped pictures of the Korean conflict with his own camera.

One snapshot of a wounded Marine being treated by Navy corpsman would later win first place in a competition held by Photography Magazine. 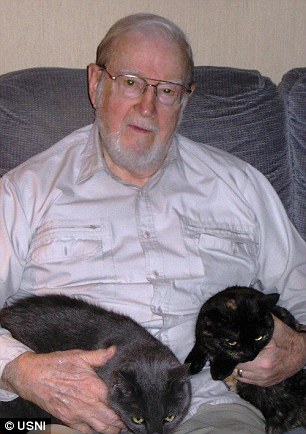 Family members of Praytor confirmed that the 90-year-old passed away at his Albuquerque, New Mexico home on January 10, 2018

But upon returning home from the war-torn peninsula to accept his prize, the Marines told Praytor he would be facing a court martial, explaining he failed to get permission from military censors before publishing the image.

His fears were assuaged, however, after the commandant of the Marine Corps decided to throw out the case and cease proceedings into the matter indefinitely.

‘I assume the commandant realized I was a celebrity at the time and he let me off the hook, and for that I attribute to the cat,’ Praytor said. ‘That little kitten saved me from the brig.’

Born on September 24, 1927, Praytor began working in journalism as a police reporter for the Birmingham News, and later joined the Marines in 1950.

After nearly escaping his court-martial, Praytor returned to Korea as a writer for Stars and Stripes, later reuniting with ‘Mis Hap’ who had by then become the spoiled mascot of the Division’s Public Information Office, USNI News reported.

‘Frank was, first and foremost, a good human being,’ friend and fellow Marine Chas Henry told Stars and Stripes earlier this month.

‘That picture of him caring for a kitten lost on the battlefield wasn’t just cute; it captured his character. Beyond that, he was an elegant writer and master communication strategist. I was fortunate to be able to count him both a mentor and friend.’

After receiving his discharge in 1954, Praytor took a series of communication jobs a a number of private companies around the Midwest, eventually launching his own advertising and public relations firm based in Houston.

In 1992, Praytor moved to Albuquerque and worked as a freelance journalist for a number of local publications.

He is survived by Katherine Praytor, his wife of more than 46 years; granddaughter Nicole; grandson Jacob; great-grandsons, Landon, Brantley and Brendyn; and great-granddaughter Preslie, according to USNI News.

The nature of his health condition was not disclosed to the public. 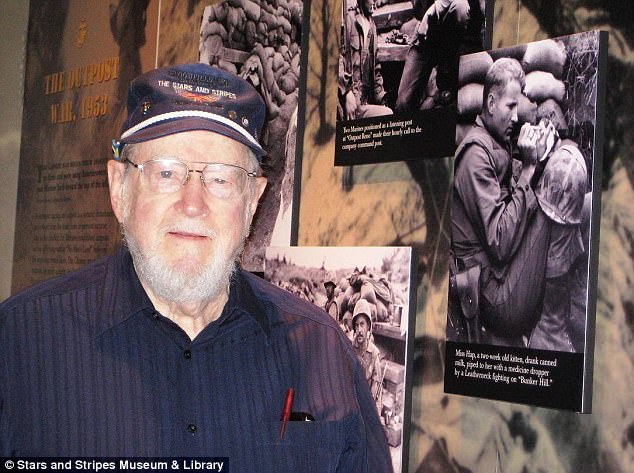 He became famous across the US after a picture of him feeding a small kitten with a medicine dropper became nationally syndicated in over 1,700 papers 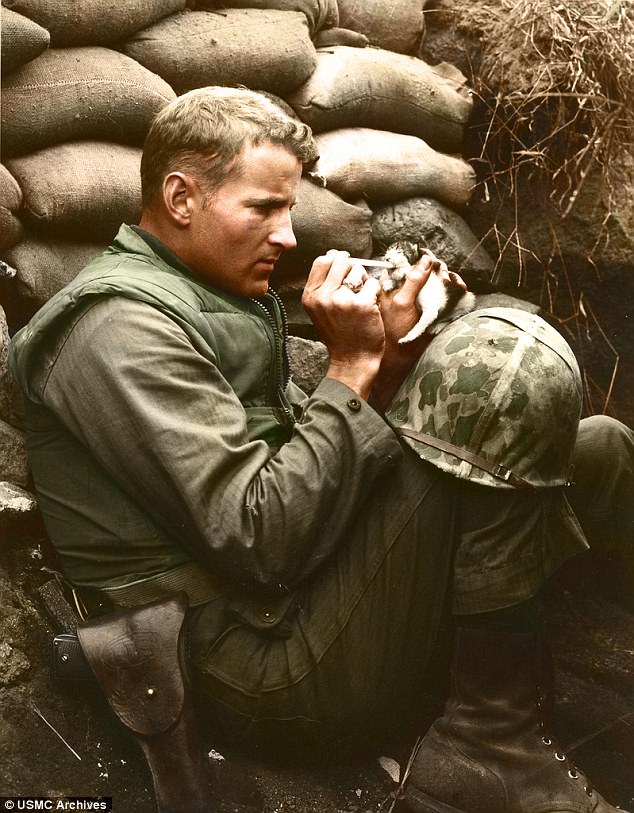 Praytor would later credit the kitten, who he named ‘Mis Hap,’ from a military court martial when he returned home from the war