He’s a therapist to the stars and counts Gwyneth Paltrow and Bruce Springsteen as fans. Now Terry Real has devised the phrase ‘normal marital hatred’ to describe the moments of domestic irritation that can cause friction in even the happiest marriages.

He says: ‘Real marriage comes the day you realise that this person [your spouse] is exquisitely designed to stick the burning spear into your eyeball.’

So what causes a red mist to occasionally envelope our writers’ relationships? Here, six wives reveal the little trigger moments that can cloud all reason…

HE NIPS OUT TO CHECK I’VE PARKED MY CAR CORRECTLY

ROWAN PELLING has been married to Angus MacKinnon for 27 years.

I suspect we women are more prone to indulging in some light loathing of our husbands than they are of us. I am certainly more horrid than I need to be — which may have something to do with my hormones, aged 54, and the fact I’ve been wed for 27 years now.

Nothing sets me off more than the stifled camel noise he makes when eating, which I used to find quite endearing, but now makes me want to attack him with an egg whisk.

I feel similarly homicidal when he opens all the windows in winter and turns off the heating, knowing nothing makes me more miserable than being cold.

And what’s with the deranged business of nipping out to check on my parking?

If our Ford Focus isn’t close enough to the kerb, he parks it all over again. And why doesn’t he know my interest in local planning regulations — one of his great hobby horses — is zero? Ditto my fascination with which make of printer is most reliable.

I know he gets up earlier than me and sees this as a sign of moral fortitude that must be mentioned 20 times a day — but where’s the virtue if you go for a three-hour nap at 11am, as he does?

I’m sure he could say worse about me, and with good reason. But he’s far too kind — and long-suffering.

JOHNNIE HATES ALL MY POTS AND PANS 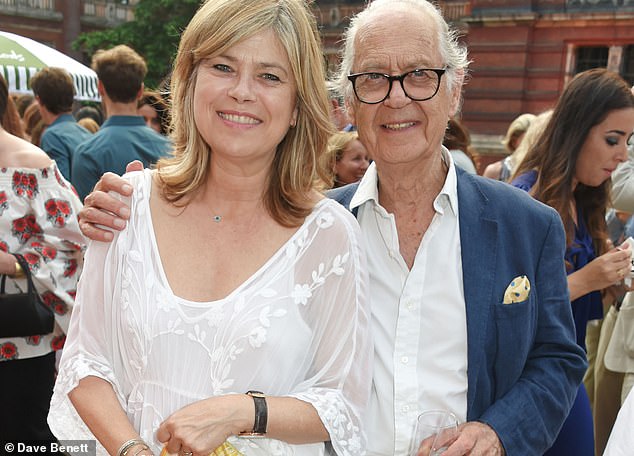 Sarah Standing says her husband John Standing ‘can only do two dishes: scrambled eggs, which take an eternity; and sausages’

SARAH STANDING has been married to actor John Standing for 38 years.

My husband frantically shouting, ‘Someone has moved an incredibly important piece of paper that I specifically left here’ makes me feel truly murderous, for there are just the two of us living in the house. Therefore, I am guilty until proven innocent.

Another big trigger is DIY. I don’t aspire to live in a perfect house — luckily neither of us do — yet I deem broken, malfunctioning appliances things that require immediate attention. Johnnie is much more laissez faire than me. And he has no clue about how to attempt to fix anything, nor the inclination to do so.

‘You married an actor, not an electrician/plumber/welder/painter,’ is his rallying cry.

As all I’m asking for is help to change an overhead lightbulb that I can’t reach, this indifference causes me to momentarily fantasise about running off with Bob the Builder. The red mist swirls.

Any criticism of any kitchen equipment, no matter how innocuous, is another trigger point. Complaining about how many pots and pans I have is unacceptable in my eyes. I’m the cook; he’s the washer-upper and consumer.

More importantly, I can cook, and find pleasure in the Groundhog Day monotony of doing so. I never want to be cross-questioned as to why I need two frying pans that are the same size when the person questioning me cooks four times a year.

He can only do two dishes: scrambled eggs, which take an eternity; and sausages — Johnnie pulls up a stool next to the oven and watches them cook through the glass door with the same levels of intensity and concentration employed when viewing the Test Match.

MARCUS SIGHS AND YELLS WHEN I DRIVE 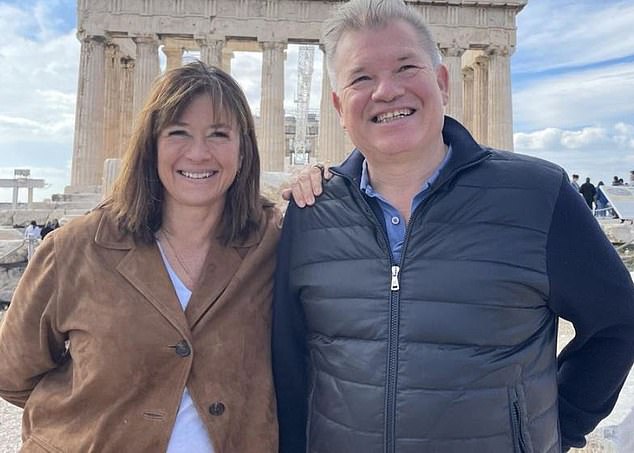 Daisy Goodwin says her husband Marcus Wilford ‘is the man who has brought me a cup of tea every morning for 34 years, which makes him indispensable’

DAISY GOODWIN has been married to Marcus Wilford for 34 years.

I was in LA on a business trip. Massively jet-lagged, I had just managed to fall asleep when my phone rang. It was 4am and, thinking there must be an emergency, I answered it. It was my husband. ‘Hi darling, I am having problems turning on the TV and I wondered if you could tell me how to do it again.’

This wasn’t just a straightforward case of male incompetence. I had bought the TV a year before, and my husband had decided that the difficulty of turning it on was a fiendish plot devised by me to come between him and 24-hour news. He was not going to admit defeat by spending five minutes learning how to turn it on. Hence the 4am call.

A classic case of marital hatred.

Other manifestations include agreeing that I will drive home after a party so that he can get drunk and then sighing dramatically every time I change lane, or yelling ‘Watch out!’ if I get close to another car when I am already braking.

The rules of normal marital hatred mean that instead of stopping and insisting that he walks home, I seethe about it for the rest of the journey back.

It doesn’t take much for my marital hatred to kick in. It can be triggered when he uses the phrase ‘The honest truth’ (which he does frequently). I want to scream: ‘As opposed to what? The dishonest truth?’

Or when I have made the bed in the morning and come home to find that he has remade it because I didn’t do it neatly enough.

Yet he is also the man who has brought me a cup of tea every morning for 34 years, which makes him indispensable — and that’s the honest truth.

HE NEVER CUTS A LOAF STRAIGHT 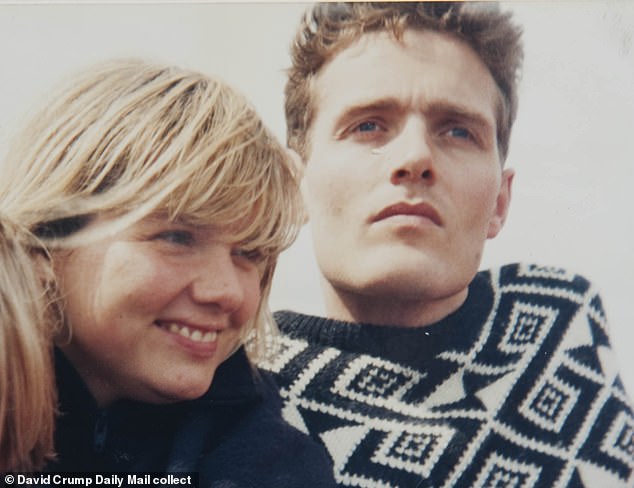 Olivia Fane says of her husband Mark: ‘Almost 30 years on, there are still a couple of habits I could well live without’

OLIVIA FANE has been married to Mark for 29 years.

We were married on May 1, 1993, but over the previous winter I was already thinking of backing out. We had been friends for years but it’s only when you think you might commit to them for your whole life that their small habits begin to drive you crazy.

Mark is super-fit and would laugh at me if he saw me struggling up a hill.

Even worse was the way he cut bread off a loaf, half a slice at a time, or even a quarter, so the loaf always looked jagged.

I didn’t. I saw he was a good man and I bit my tongue. I would be crazy to lose him over a silly word.

One day I realised that if I didn’t get all this off my chest I was going to implode. He took it all incredibly well. He mentioned a couple of things I did, too — such as the slurpy way I ate yoghurt.

Almost 30 years on, there are still a couple of habits I could well live without.

Mark plays the violin, and though I’ve managed to transcend the noise of his practising, he cannot resist picking the instrument up en route to the kitchen when I tell him supper’s ready.

The little ditty he plays then is excruciating. It’s a miracle I’ve not thrown his violin on to the fire. And why does he never throw away his old shoes? He seems to prefer them when the soles are hanging off them. I hear him going ‘flap, flap, flap’ around the house. Argh!

PAUL LETS ME TRIP OVER HIS SHOES 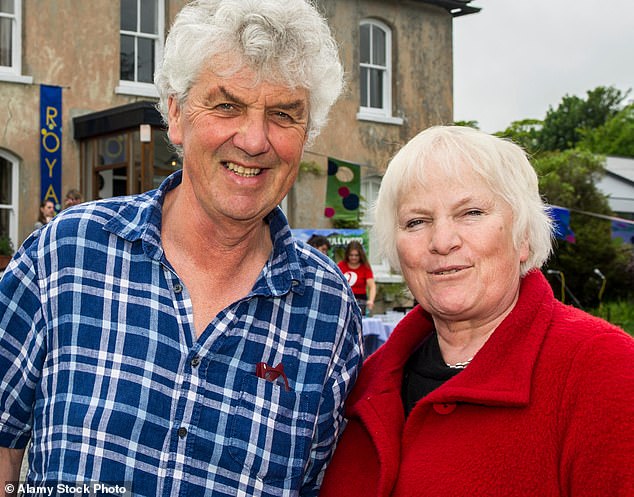 Libby Purves says of her marriage to Paul Heiney: ‘We have the simple Rule of Grunt. If I say something, out of the blue, he has to grunt, to prove it has passed his eardrums’

LIBBY PURVES has been married to writer and broadcaster Paul Heiney for 42 years.

There are the shoes, obviously. The only gap in his blameless domesticity is the fact that he steps out of shoes or slippers and leaves them where they are. Where I will trip over them.

It doesn’t amount to hatred in itself but it sets the ball rolling, and aggravates the real stuff: like the ‘not answering’ business.

In C. S. Lewis’s novel That Hideous Strength, Mrs Dimble says: ‘Husbands are made to be talked to. It helps them to concentrate on what they’re reading.’

Even long before marriage I watched how my dad rarely lifted his head from the newspaper or a Le Carre novel in response to my mother’s stream of consciousness.

And now, if ever marital hatred threatens, it is provoked by that sense of speaking into a void which doesn’t even echo. A solid blanket of cotton wool. This is compounded by later being accused of not having told him something.

We have resolved this, as I accept that I talk too much and some of what I say is quite boring. So we have the simple Rule of Grunt. If I say something, out of the blue, he has to grunt, to prove it has passed his eardrums. ‘Hrrmmmth’ will do.

HE LEAVES DAMP TOWELS ON THE BED 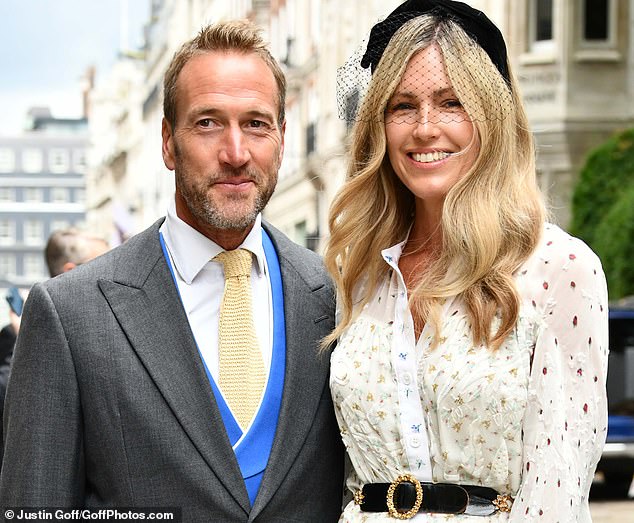 Marina Fogle says of her husband Ben: ‘Who uses the last item and returns the empty vessel to the drawer?’

MARINA FOGLE has been married to presenter Ben Fogle for 15 years.

I’m married to a saint; a man who has charmed millions on TV, and who is unfeasibly kind, eternally patient, calm and good-natured. But I’m still reassured to hear that ‘normal marital hatred’ is, well, normal.

Part of me thinks hatred is possibly too hard a word. Irritation maybe. But then I remember the ire with which I pick up a damp towel, flung carelessly on to my side of the bed, leaving a damp patch in its wake.

Isn’t the prospect of a soggy towel after a lovely bath enough to warrant the brief effort of placing it on the heated towel rail? And if not, why does it always end up on my side of the bed?

Then there’s my husband’s misguided belief that he can do DIY. The sound of the drill in our house sends shivers down my spine. The endearing yet terrifying gung ho ‘I’ve no idea what I’m doing but I’ll give it a go anyway’ attitude invariably results in chunks of our wall missing.

Or the tidying. Nothing gets put away. Everything just gets left out until he decides to do ‘a big tidy’. But, instead of returning things to their rightful places, my husband shoves the lot into a scarcely used cupboard, cramming it shut and then forgetting about it. I’m still trying to locate my sewing kit that was tidied away in 2019.

My loudest snorts of fury occur when I reach for a painkiller (or antihistamine, biscuit or plaster) and find an empty box. Who uses the last item and returns the empty vessel to the drawer?