MARK ALMOND: Spain could turn into the next bloody Balkans

Spain’s Catalan crisis has stopped simmering and boiled over as, after weeks of dithering, the regional parliament voted to declare independence.

The reaction of the national government in Madrid was immediate – and unprecedented, revoking Catalonia’s autonomy and approving measures that allow it to impose direct rule over the region, at least until a new regional government is elected.

It raises the prospect of the feared civil guard and even the army being deployed as thousands of pro-independence voters last night took to the streets to celebrate.

If ever there was a time for cool heads, it is now. But even as the Spanish prime minister Mariano Rajoy was appealing for calm, some Catalans were threatening a campaign of civil disobedience in the event of a crackdown by Madrid.

Now a battle of wills that could turn ugly is on the cards. There are few in Spain who do not fear a looming confrontation between the Mossos, the local Catalan police committed to protecting their political leaders and public buildings, and forces from Madrid trying to suppress secession.

The risk of violence should not be underestimated. Think back to the break-up of Yugoslavia in 1991.

Few thought that Serbs, Croats, Bosnian Muslims and Kosovo Albanians would sink to the level of the brutal civil wars which wrecked the Balkans, but once blood is shed – even by accident – emotions can rapidly get out of hand.

No one knows how many of Catalonia’s 7.5million inhabitants truly want to break with Spain. In the illegal referendum earlier this month that triggered the present crisis, more than 90 per cent voted to leave. But only about 43 per cent of the population actually voted. Many pro-Spanish Catalans boycotted it. 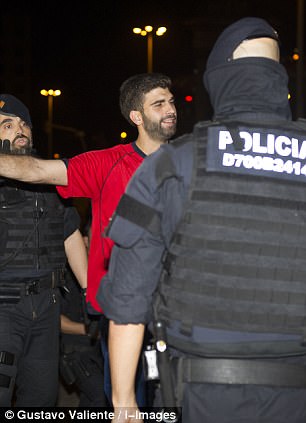 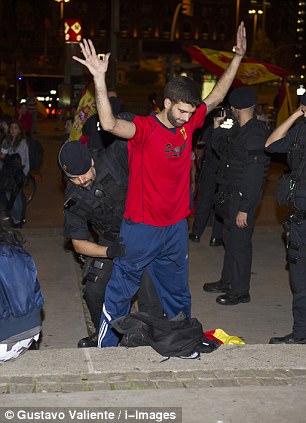 However, it is clear that a vocal and dedicated group are determined now that their ‘nation’ should be independent, the autonomous powers it has enjoyed for decades are no longer enough.

Living in Spain’s richest region, Catalans have long been resentful at seeing so much of their taxes disappear to Madrid to ‘subsidise’ – as they see it – the rest of the country. But economics are only part of the crisis.

The Catalan sense of ‘self’ is ferociously strong – they are defined by their own language, culture, cuisine and a long tradition of defying Madrid. Catalan identity has been permitted to flourish only since the death of the dictator Franco in 1975, and of course Spanish politics continues to be haunted by the civil war fought by Franco’s Nationalists against the Republicans in the 1930s.

The fact that their great-grandparents and grandparents fought against Franco, while the PM Mariano Rajoy’s family sided with the dictator, is not lost on the Catalans today.

As for the EU, it has shown itself insensitive to the interests of small regions. Brussels and member governments of the EU, including our own, have said from the start that they won’t recognise a breakaway Catalonia which will not be allowed to join the EU or keep the euro.

The tenacity of Madrid as it contemplates a possible break-up is a key factor in the dangerous days and weeks ahead. 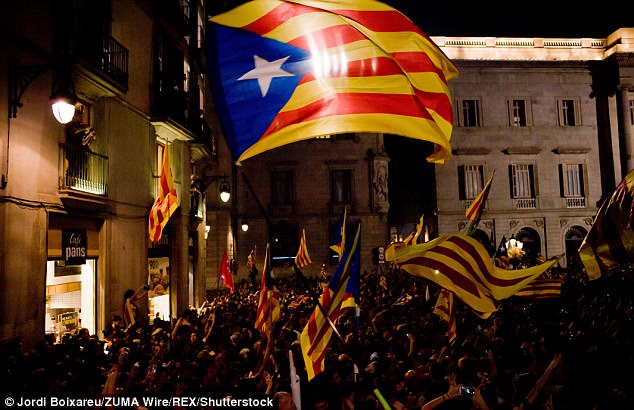 The government and Spain’s Constitutional Court have both said the secession bid was illegal, and after Friday’s independence vote, Rajoy said it was a move that ‘not only goes against the law but is a criminal act’

Again, there are historical lessons. Madrid lost control of Gibraltar to Britain in 1704, but more than 300 years on still lays claim to the Rock.

Even in the unlikely event of Catalonia managing some kind of functioning independence without open conflict with Spain, the fact remains that Madrid can block its access to the EU and other international bodies, so that the self-proclaimed state will effectively be under siege.

Prime minister Rajoy has called an election for the Catalans on December 21 – but this time it will be the Catalan nationalists who stay away.

At the very least a tug of war, if not violence, is coming fast to Catalonia.

No one in Spain seems able to act as an honest broker – certainly not King Felipe who, perhaps unwisely, has intervened to side with Madrid – while its partners in the EU refuse to do so.

What Spain needs now is friends to help mediate and calm things down.