Mark Billingham is an unconventional literary superstar. Prior to selling five million books featuring his country-music-loving detective Tom Thorne, Billingham worked as an actor, stand-up comic and screenwriter. So we probably shouldn’t be surprised that he’s recently added ‘rock star’ to his CV.

His band, the Fun Lovin’ Crime Writers, are a bookish supergroup, a kind of Criminal Cream. They comprise Billingham (guitar, vocals) and five other notable noir-ists, including Val McDermid on lead vocals and Christopher Brookmyre on guitar. Doug Johnstone, Stuart Neville and Luca Veste complete the line-up. Their website has a page devoted to forthcoming gigs, just like a proper band. Billingham guffaws. 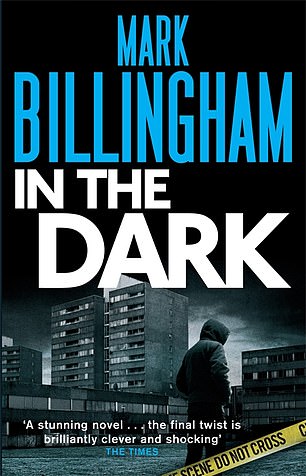 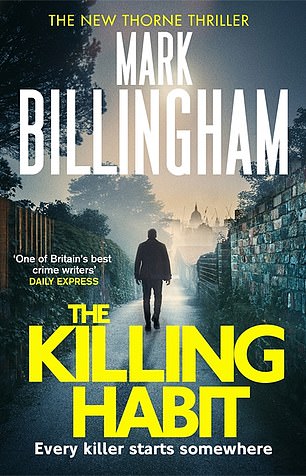 In The Dark; The Killing Habit

‘We’re a party band. We cover songs about murder that people can jump around to,’ he says while taking a break between rehearsal and soundcheck in Glenrothes, where he’s making two appearances at the ReimagiNation festival: one as an author, the other as a Fun Lovin’ Crime Writer.

He’s buzzing that the band have just added The Jam’s Down In The Tube Station At Midnight to the set, to be unveiled at tonight’s show. ‘It sounded brilliant in rehearsal!’ he beams. ‘Thankfully, three of the band are fantastically good musicians. Chris and I are kind of learners on the guitar but we get away with it. Val can sing. We can all sing, actually. We’ve got so many influences. Stuart is rock, Val is folk, Chris is indie and I’m country.’

The band formed at an open-mic night in New Orleans two years ago. ‘We’re six mates who like playing music together,’ he says. ‘We rock up to a festival, do our own events, and then do a show. We all get on. It’s really lovely to collaborate with other people when you spend most of your day on your own.’ 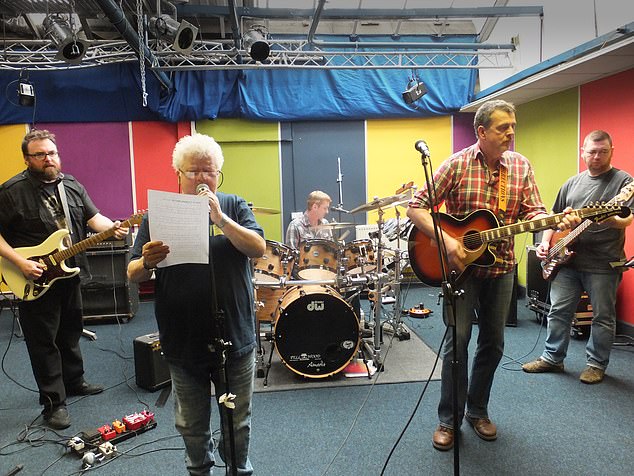 Billingham’s band, the Fun Lovin’ Crime Writers, are a bookish supergroup, a kind of Criminal Cream. They comprise Billingham (guitar, vocals) and five other notable noir-ists, including Val McDermid on lead vocals and Christopher Brookmyre on guitar

The only rule is that they will never write their own songs. ‘We’ve absolutely made that decision,’ he says. ‘We would split up within a week if we were starting to write original material. “Hey, here’s a lyric I’ve come up with…” God, no!’

Billingham, 56, saves his original material for his novels. Since first appearing in his 2001 debut, Sleepyhead, Thorne has become a beloved fixture in the genre, though his creator isn’t quite sure why. ‘I don’t know any more about him than the reader,’ he says. ‘I keep screwing up, and going, “God, what colour are his eyes again? Does he have a sister?” Maybe that’s what keeps him interesting.’

Thorne was portrayed on Sky One by David Morrissey in 2010. A second series was planned before being abruptly cancelled. ‘I wasn’t happy with how it ended up,’ says Billingham. ‘We got slightly screwed, myself and David. We were set fair for the new series, writing scripts, then the person who commissioned it left and we were left high and dry. David was brilliant, completely committed to it. He rang me late one night – I think he may have had a drink – and said, “It’s the best part I’ve ever played.”’ He sighs. ‘TV is a constant up and down. All I can do is concentrate on the books.’

His latest, The Killing Habit, was inspired by the ongoing case of the so-called Croydon Cat Killer, which has seen more than 450 domestic animals killed in the south of England in the past few years. ‘One of the big worries the police have is, what is this person going to do next? This individual kills and mutilates animals, then lays them out for their owners on the front lawn. It’s an aggressive crime against people. He wants people to feel pain.’

Billingham had misgivings about writing about the grisly subject matter. ‘There’s a long-standing joke among crime writers: you can do whatever you like to people, but you can’t hurt any animals or the readers will come after you.’ 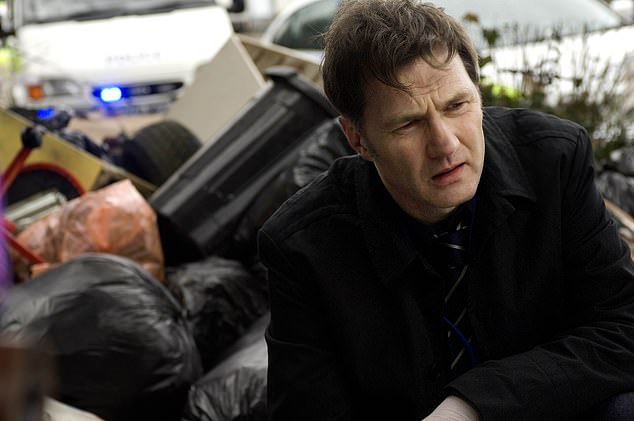 Morrissey in the Sky adaptation of Billingham’s Sleepyhead. Set in London, Billingham’s books have a sharp socio-political edge

Violence in general is a hot potato in crime fiction. Last year, a new award – the Staunch Prize – was set up to celebrate books where ‘no woman is beaten, stalked, sexually exploited, raped or murdered’. Billingham snorts. ‘That prize is preposterous. The idea of awarding a prize for the absence of something is ridiculous. Whoever set it up underestimated the way the crime-writing community would react. It’s hugely insulting to a swathe of crime writers, often women, who are writing about violence, and often violence against women. You can’t explore that issue without dealing with it.’

Nonetheless, his own attitude to violence has changed. ‘I have a lot less on-stage violence than when I started, though I think the books are darker. If you have too many bodies it becomes meaningless and the readers stop caring. I can’t be doing with all that, “He’ll kill again when the moon is full…” Less is more. A single spot of blood on a pristine kitchen floor is far more powerful.’

He’s seen violence up close. His research process has involved accompanying uniformed police on overnight patrols. ‘They put me in a stab vest, give me a radio, and I drive around with them. The first one was extraordinary: it started with a body and it ended with a body. I’m in the corner scribbling in a notebook trying to pretend I’m cool about it.’ 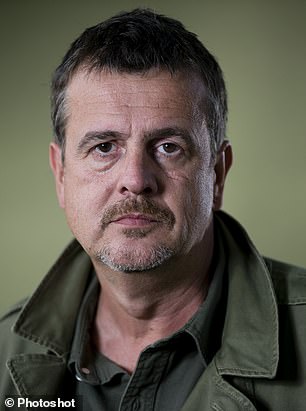 Mark Billingham began his career as an actor, appearing Birds Of A Feather, The Bill and Maid Marian And Her Merry Men

Set in London, Billingham’s books have a sharp socio-political edge. His 2008 novel In The Dark, recently adapted by the BBC, tackled gangs and street crime. ‘Why aren’t there more books about that?’ he wonders, making noises about the ‘liberal metropolitan elite’ and books set in vicarages. ‘Who are the real victims of crime? Young black males who are in gangs. In the streets where I live, that’s what’s happening. Perhaps the crimes are not glamorous enough. A 17-year-old blonde girl who goes missing will get more publicity than a 17-year-old black male who goes missing. But if you start delving into those waters, your books become political with a capital P.’

There’s an element of small ‘p’ politics in the books, however, with The Killing Habit touching on the impact of cuts on police budgets. ‘It would seem ridiculous to ignore such a major issue. Rather than someone make a big tub-thumping speech, I’d rather Thorne just made a wry comment about the fact they can’t afford a new kettle.’

Billingham began his career as an actor, appearing Birds Of A Feather, The Bill and Maid Marian And Her Merry Men, which he also co-wrote. ‘I still get emails from people saying, “Is that you in Dempsey And Makepeace?” I miss it sometimes, but I get lots of performing jollies doing this.’

THREE MORE COPPERS ON THE BEAT… 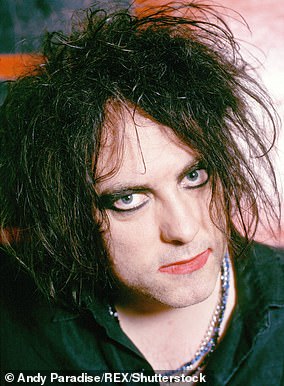 The Rebus books have been named after songs by The Cure (The Hanging Garden), Jackie Leven and The Associates

Ian Rankin’s maverick DI loves everything from Van Morrison to Mogwai. The Rebus books have been named after songs by The Cure (The Hanging Garden), Jackie Leven and The Associates.

Colin Dexter’s Oxford sleuth is a classical obsessive, particularly Mozart and Wagner. The music became synonymous with the character; there’s even an album: The Essential Morse Collection.

John Harvey’s Nottingham-based Polish DI lists his primary interests as ‘sandwiches and jazz’. His love of Miles Davis, Dizzy Gillespie and – above all – Billie Holiday is central to the books’ atmosphere.

When the acting work dried up, he became a stand-up. He sees certain similarities between comedy and writing. ‘Crime fiction is full of punchlines, they’re just a lot darker than jokes.’ It transpires that there’s also a degree of improvisation.

‘My books aren’t meticulously planned out, that would feel like homework. I do have a whiteboard in my office but all it says is: “Get dressed. Buy cheese. Write novel.” He giggles. ‘Rules to live by, right?’ Sometimes he struggles to achieve even the first of these goals. ‘My record is three days in an old dressing gown and ratty pyjamas. If I’m not going anywhere, what’s the point?’