VAR has found itself making headlines for the wrong reasons again this weekend.

An online petition to remove the video technology from the Premier League has even emerged and you can be sure a fair few managers, players and pundits would be willing to add their names.

Here, Mark Clattenburg, our Sportsmail columnist and the man who has refereed the finals of the FA Cup, Champions League and European Championships, gives us his verdict on the problems, successes and the future of VAR in the Premier League. 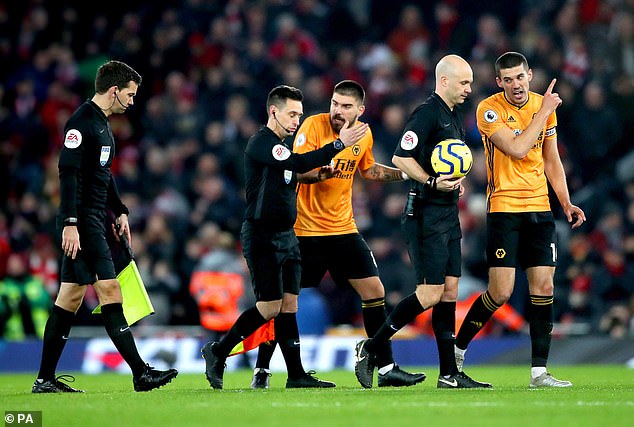 Firstly… so is it really time to scrap VAR?

Definitely not. It is an evolving project and just needs minor tweaks. Let us not forget, VAR is getting far more right than wrong this season.

What we have found, though, is that the Premier League is unique in the speed of the game and strikers playing on the edge.

For example, I referee in China and we use VAR, but we do not have these marginal offside controversies because the players are not as quick and strikers generally run from deeper positions. 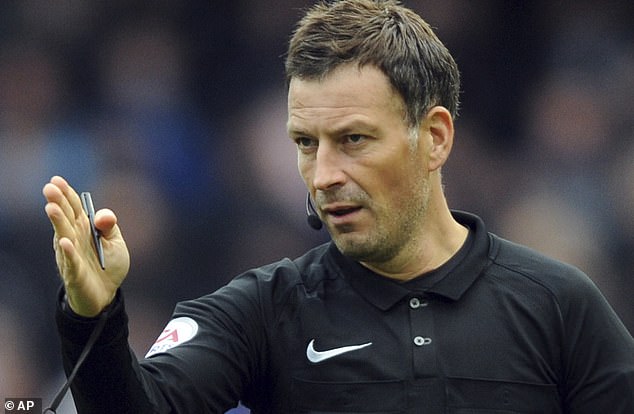 Here, the likes of Sergio Aguero has always been a nightmare for assistant referees because he plays right on the shoulder of the last defender, and we do not want to change that.

So it is about using the technology to best suit the Premier League, and that is a work in progress. Let us not abandon it now, let us find ways to improve it and make the changes needed.

Because I will repeat – VAR is getting a lot of big decisions right that, in previous seasons, would have caused huge controversy if given the other way. 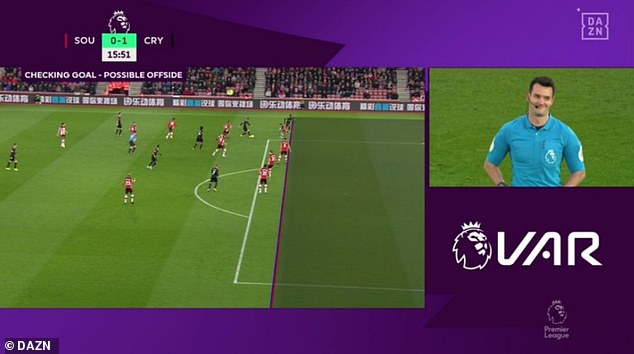 Wilfried Zaha, who assisted Max Meyer’s goal, was adjudged offside in the build-up to the goal

Okay then, what are the changes you would make to improve VAR?

There are five suggestions I have to make VAR a better experience for everyone. Now these could be implemented immediately or trialled as future changes…

Brighton defender Dan Burn thought he had scored when firing home from an Aaron Mooy free-kick.

But, after a couple of minutes of VAR deliberation, it was ruled out — with part of his arm slightly ahead of the last defender.

Go back to the assistant referee flagging for offside. Yes, mistakes will be made, but I think the five goals that were disallowed over the weekend for marginal offsides – toes and armpits – would all have stood.

And at least this removes the farcical nature of players not knowing if they are offside before scoring a goal.

If you see a flag, you’re off. VAR was never introduced to rule out the types of marginal offsides we have seen recently.

2. What is ‘clear and obvious’? We need to define that far better.

The consistency of decisions and when to use VAR must be improved. This is difficult, I admit, and it could be that over time we all adapt to what requires VAR intervention, but at the moment I see inconsistencies.

For example, Newcastle’s Andy Carroll was shoved in the back in the penalty area against Everton on Saturday. 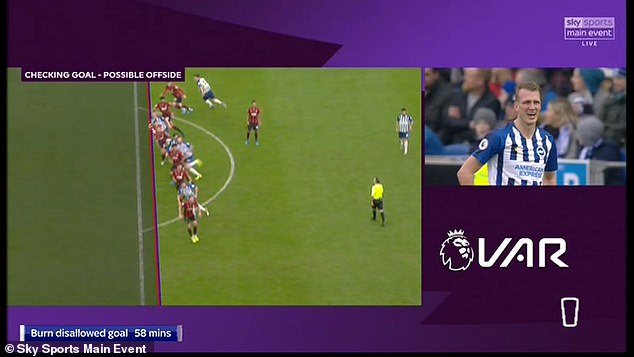 Dan Burn was adjudged to have been offside, with part of his arm ahead of the last defender 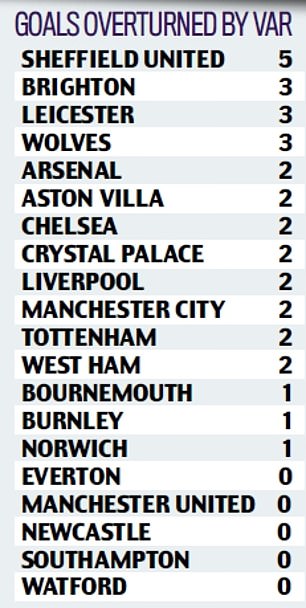 It’s a free-kick anywhere else on the pitch but VAR did not intervene because they deemed it was not a stonewall penalty and so stuck with the on-field decision.

On another day I think this is given as a penalty by VAR – this is why a more definite instruction on ‘clear and obvious’ is needed. At the moment, though, it feels like there is too much interference.

For example, Liverpool would not have complained about Wolves’ marginal offside goal on Sunday. Jordan Henderson, the Liverpool skipper, actually threw the ball back to halfway. He thought it was a goal and, under the challenge system, it would have stood.

This would put the ownership and responsibility back onto teams. Make it so that they can challenge any decision they see fit, but limit it to two or three per game.

4. Referees must start using pitchside monitors to make their own call on subjective decisions. Otherwise, what are they there for?

Norwich striker Teemu Pukki steered the ball into space with his chest then fired home to give his struggling side what he thought was a commanding 2-0 first-half lead.

But, after celebrating the goal, it was ruled out because part of his arm was millimetres ahead of Spurs centre back Jan Vertonghen.

Make it so that VAR is not the referee and the final decision rests with the man on the field.

On a similar theme, when I worked for ITV at the World Cup last year, they had 20 people analysing all angles to get us the best images to inform our opinion on decisions.

At Stockley Park there is the VAR and his assistant – how can they possibly see all angles when under pressure to make a quick decision?

I’d put more eyes in there with them.

5. Get the referees wearing live microphones and make the audio available to all inside the stadium and watching at home.

It would increase transparency and understanding and deter dissent. 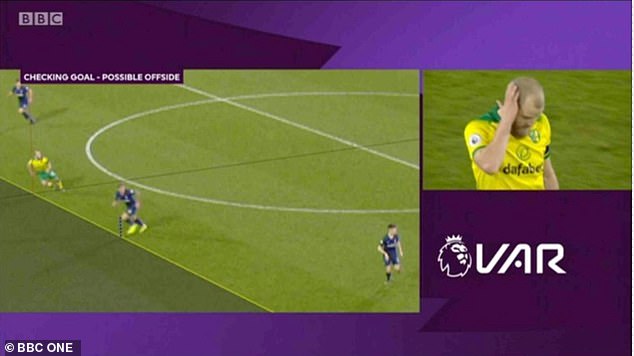 Going through that list makes it feel like VAR isn’t working, why do you insist it is?

Moments after Sadio Mane had fired Liverpool ahead towards the end of the first half, thanks to a handball call being overturned by VAR, Pedro Neto levelled with a smart finish inside the box.

But VAR struck again, ruling the goal out as Jonny Otto’s toe was slightly ahead in the build-up.

Think about the debate surrounding VAR, it is more about its use and implementation rather than it getting decisions wrong. That is because it is getting the vast majority of decisions absolutely spot on.

For example, without VAR, the narrative following the Manchester derby earlier this month could well have been United being denied a stonewall penalty at 0-0 and potentially then losing the match.

As it was, VAR went back and correctly overruled the on-field decision and United went on to win after scoring their penalty. 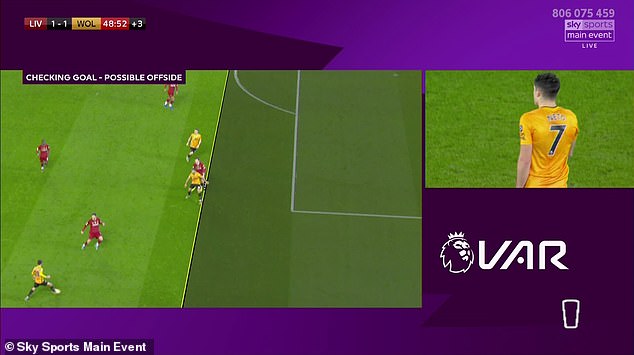 In the buildup to Pedro Neto’s equaliser, Jonny Otto was slightly beyond the last defender

Another good example is the award of Sadio Mane’s goal against Wolves on Sunday, when referee Anthony Taylor incorrectly disallowed it for handball.

But what is also very important to remember is that VAR is acting as a deterrent. How many off-the-ball elbows, stamps or punches have we seen this season? None.

Players know they can no longer get away with it. Much like dangerous, leg-breaking challenges, they have significantly decreased in number.

Marginal offsides have been the main point of contention of late.

How about the suggestion of Jamie Redknapp that the line is drawn at the players’ feet instead of leaning shoulders? Or Graeme Souness said that if any goal-scoring part of the body is onside?

Lys Mousset had his strike — which he thought had made it 1-0 to the visitors — ruled out after replays showed his foot was slightly ahead of the last defender when the ball was played.

It was Sheffield United’s fifth goal to be ruled out by VAR this season and boss Chris Wilder said: ‘Surely this is not a situation that is helping the game.’

You cannot do that. You would be complicating the offside law and making it one rule for the Premier League and another for the rest of football.

Would you then coach Premier League players to leave a trailing leg in line with the last defender?

I agree something must be done, however. Football is an entertainment business and that means goals – that is why the benefit always went with the attacker when it came to offside. Not now.

The advantage lies with the defenders and the entertainment and enjoyment of the game is in danger of being severely damaged. 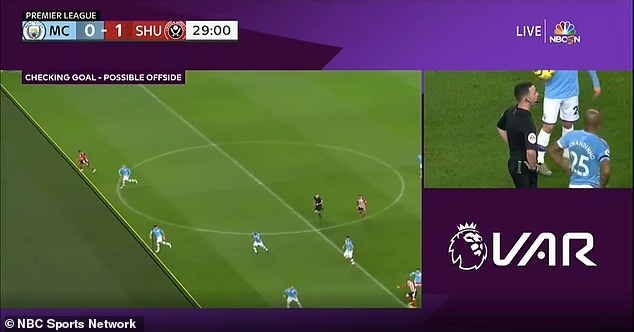 Lys Mousset’s goal was disallowed, Sheffield Utd’s fifth goal this season to be ruled out via VAR

What is being overlooked amid all of this debate is that referees just aren’t as good as they used to be.

Max Meyer thought he had equalised for Palace but VAR judged that Wilfried Zaha — who provided the assist — was in an offside position when receiving the ball.

His arm appeared to be slightly ahead of defender Jack Stephens. Gary Lineker called it ‘ludicrous’.

We have Anthony Taylor on the verge of going to Euro 2020 but you can see he is refereeing with a weight on his shoulders and is making mistakes.

He disallowed Mane’s goal versus Wolves only for it to be overruled and also failed to see Spurs goalkeeper Paulo Gazzaniga’s karate kick on Chelsea’s Marcos Alonso last week.

It looks to me as if he’s guessing at decisions. Continue to do this and players will see through you very quickly.

So while VAR needs change, it is also doing a very good job at reversing some decisions that would have caused major controversy – and that is why it was introduced in the first place. 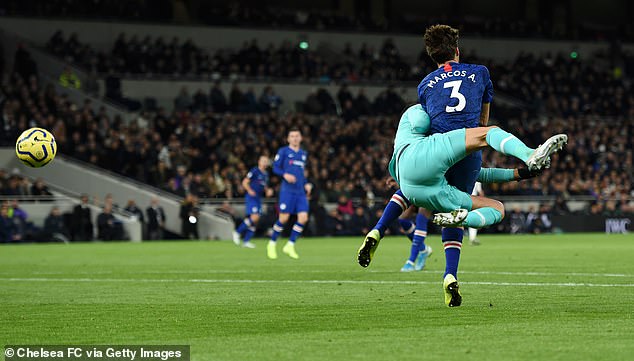