Baroness Nicholson called trans activist and model, Munroe Bergdorf, ‘a weird creature’ and then tried to justiy it with a Shakespeare reference.

Chair of the Foundation Mark Damazer said they made the decision not only because of the ‘troubling’ tweet but because people thought Baroness Nicholson’s title meant she represented the Foundation.

‘Baroness Nicholson is more than entitled to her own views but that tweet caused some confusion about the difference between an honorary title and something that symbolises the booker,’ he said on Radio 4 this morning.

Baroness Nicholson, who has been an honorary vice president since 2009, said she never meant any tweet to cause sadness but realises her tweet has and issued an apology today. 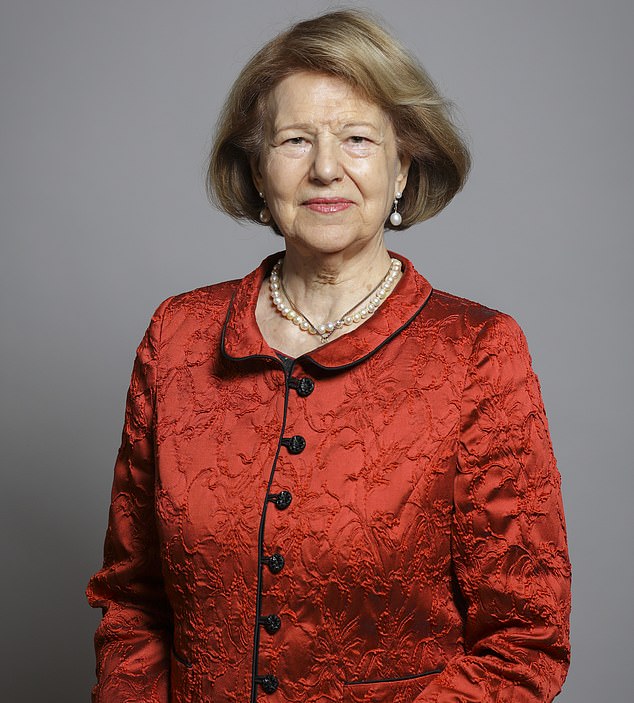 The Tory peer (pictured), whose late husband Sir Michael Caine helped establish the prize, had been honorary vice president since 2009

She said did not recognise Munroe Bergdorf’s eminence and career and respects the work the model and activist has done for other people.

‘I’m asking her if we can have a meal together maybe we might find a lot in common you never know,’ said Baroness Nicholson.

Mr Damazer stressed the decision to axe the honorary role was not because of Baroness Nicholson’s position on certain trans rights that are often contested.

He said it was not to do with ‘her stance on the relationship between trans rights and the issues about spaces and facilities which I know many, not least amongst them JK Rowling, think should be for biologically determined, as it were, women. ‘

He said the Booker Foundation had no role in deciding or censoring her views on those things but it was easy to see the tweet would cause considerable effects to trans people.

Bergdorf welcomed the foundation’s decision to do away with Baroness Nicholson’s role and said: ‘See what happens when we all stand up TOGETHER against bigotry!’

Baroness Nicholson insisted she is not transphobic as many booker trustees have publicly called her.

She said: ‘I am not transphobic.

‘I work with all sorts of people everywhere and I fully support their rights and everyone else’s rights.

‘I have a lifetime commitment to equality and diversity.

‘I’m a feminist in the broadest sense of the word.’

Mr Damazer underlined that Baroness Nicholson’s views did not represent the Booker Foundation’s and wanted to clarify that honorary positions have nothing to do with the day-to-day running of the organisation.

Baroness Nicholson said it saddened her that the Foundation does not see her as someone who embodies equality and diversity.

She was disappointed in the Foundation’s distancing itself from her and said there might not be a Booker if she had not suggested turning the company into a charitable foundation.

Monroe Bergdorf welcomed the decision to axe the baroness and said on Twitter: ‘See what happens when we all stand up TOGETHER against bigotry!’