Mr Johnson said Britain would break free of the EU’s ‘manacles’ like Bruce Banner, who transforms into the Hulk when angered.

But Ruffalo, an American actor who lives in New York and plays the Hulk in Marvel’s Avengers films, was quick to weigh in and reject the comparison.

‘Boris Johnson forgets that the Hulk only fights for the good of the whole,’ he wrote on Twitter today.

‘Mad and strong can also be dense and destructive. The Hulk works best when he is in unison with a team, and is a disaster when he is alone. Plus…he’s always got Dr. Banner with science and reason.’ 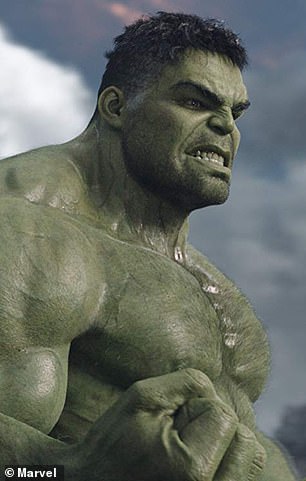 Ruffalo, who plays the Hulk in Marvel’s Avengers films, was quick to reject the comparison

Mr Johnson’s novel description of Brexit raised eyebrows across the worlds of politics and cinema today.

‘Banner might be bound in manacles, but when provoked he would explode out of them,’ the PM told The Mail on Sunday.

‘Hulk always escaped, no matter how tightly bound in he seemed to be – and that is the case for this country. We will come out on October 31 and we will get it done.

Ruffalo, who has played the Hulk since 2012, has previously taken aim at Donald Trump’s ‘corrupt administration’ and approvingly shared an article about ‘the great British Brexit robbery’.

He joined a number who suggested the Prime Minister lacked understanding of the comic book character when he made the comparison.

‘This is the kind of thing my kids would say aside from they would never make such glaring errors about The Hulk, I’ve raised them properly,’ Labour MP Jess Phillips said.

Call The Midwife actor Stephen McGann added: ‘I also note, with reference to the Hulk, that Theresa May’s ‘red, white and blue Brexit’ has morphed effortlessly into a ‘green, violent and emotionally unstable’ Brexit. Righto.’

‘Even to Trumpian standards the Hulk comparison is infantile,’ he tweeted. ‘Is the EU supposed to be scared by this? The British public impressed?

‘Is this Boris Johnson whistling in the dark?’ 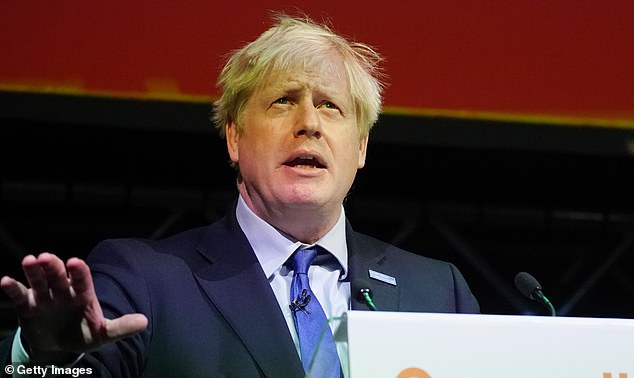 Boris Johnson (pictured on Friday) said Britain would break free of the EU’s ‘manacles’ like Bruce Banner, who transforms into the Hulk when angered

However, Brexit Secretary Steve Barclay praised Mr Johnson’s novel metaphor and even revived another recent favourite of the Conservative Party – an assertion that Labour leader Jeremy Corbyn is a ‘chicken’ for not voting for an early general election.

‘The Hulk was a winner and was extremely popular and I’d rather be backing a character and a leader who is The Hulk, rather than one who is on the chicken run, as Jeremy Corbyn is,’ Mr Barclay told Sky’s Sophy Ridge On Sunday.

The PM struck a confident tone on reaching a Brexit deal, saying he thinks ‘we will get there’ and that a ‘huge amount of progress is being made’.

He said: ‘I will be talking to Jean-Claude about how we’re going to do it. I’m very confident.

‘When I got this job everybody was saying there can be absolutely no change to the Withdrawal Agreement, the backstop was immutable, the arrangements by which the UK was kept locked in to the EU forever, they said no-one could change that.

‘They have already moved off that and, as you know, there’s a very, very good conversation going on about how to address the issues of the Northern Irish border. A huge amount of progress is being made.’

However, Downing Street has cautioned that Monday’s meetings will not be a ‘big breakthrough’ moment in the Government’s bid to strike a deal with Brussels.

Ahead of the trip, Mr Johnson added: ‘Don’t be fooled by (Labour leader Jeremy) Corbyn and the ringleaders. On the one hand, they say I don’t want a deal.

‘On the other, they want to force me to extend. Both are wrong. I am straining to get a deal, but I will also end the uncertainty and take us out on the October 31.’