Mark Williams on how he caught the acting bug

Talk to the animals? That suits me sir! He’s The Fast Show’s catchphrase king. And now Mark Williams has a new one… as Dr Dolittle

The day before we meet, Mark Williams was on a platform at Clapham Junction station. When a train arrived, he found himself standing alongside the driver’s cab. As it moved away, the driver leaned out, tapped his nose and, apeing the catchphrase of the shifty geezer Williams played in The Fast Show, said in a West Midlands drawl: ‘You ain’t seen me, roight?’

‘That really made me chuckle,’ Williams says. In truth he should be used to such interventions. Every day someone will shout at him that Fast Show staple: ‘Suits you, sir!’ Or children will ask him to reprise one of Arthur Weasley’s bons mots from the Harry Potter movies. Or, increasingly, fans will proffer a line from Father Brown. ‘He’s very popular,’ Williams says of the sleuthing priest. ‘Chinese people come up to me. Italians, Scandinavians…’

The Pushmi-Pullyu in the new production of Dr Dolittle. ‘Rex Harrison was the same age as I am now when he did the film,’ says the 59-year-old Mark Williams

And it is likely that a new cry will soon be directed at Williams: that he can talk to the animals. Fifty years on from the release of the film starring Rex Harrison, he is playing the title character in a new stage version of Dr Dolittle. ‘Rex Harrison was the same age as I am now when he did the film,’ says the 59-year-old – not that he’s studied the Oscar-winning movie. ‘I never watch how others do a part – I don’t think it’s useful.’

As he speaks, the sound of rehearsal drifts in. The finishing touches are being put to the all-singing, all-dancing musical, starring Williams, Brian Capron and Vicky Entwistle. Not that its star dances or does much in the way of singing. ‘If you remember the film, songs such as Talk To The Animals are written to be spoken, not sung. As for the dancing – no, not me.’ 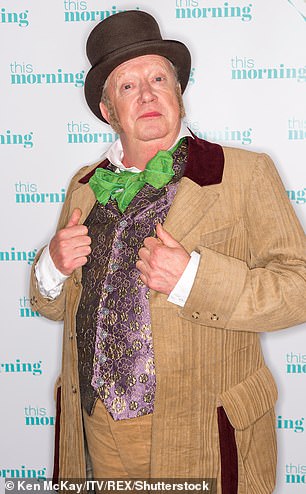 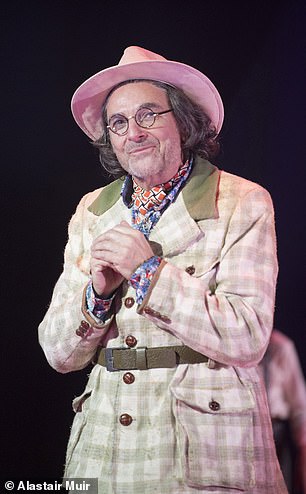 Williams’s trademark laconic delivery is misleading: this is someone enthused by his craft. He has been like that, he says, since the first time he trod the boards, as a teenager in Bromsgrove. ‘I got the bug when I did a school play called The Dyspeptic Ogre. None of us knew what dyspeptic meant, but I loved it. I remember thinking: I can do this.’

The 1967 film was beset with disasters, including a giraffe that stepped on Rex Harrison’s groin and a parrot that yelled ‘Cut!’

After school he headed to Oxford, where he embraced every acting opportunity, including starring in a film alongside fellow students Hugh Grant and Imogen Stubbs. After graduating, he decided to make a go of the thespian lark. It wasn’t easy.

Williams’s big break came when he was cast in The Fast Show, 25 years ago. ‘I got co-opted when Paul [Whitehouse] said, “Williams, we need an ack-tor.” And that was the concern he had about The Fast Show’s runaway success: Williams saw himself as an actor, not a comedian. He needn’t have worried: from Harry Potter to Father Brown, he’s demonstrated his versatility.

Doesn’t his geniality restrict him to always playing good guys? ‘After Harry Potter I had a run of villains – I’ve been over to the dark side and enjoyed every minute.’ Just don’t tell those Father Brown fans in China – they won’t know what to shout at him.