A former California startup has accused Mark Zuckerberg of ‘weaponizing’ user data to earn Facebook billions and force rivals out of business.

The social media company is also accused of allegedly conducting mass surveillance through its apps by gathering information from texts and photos of users and their friends, as well as smartphone microphones.

The allegations are from the lawsuit filed against Facebook by Six4Three – a former California startup that was behind the failed app Pikinis, which allowed users to scan their Facebook friends for bikini photos.

Documents for the lawsuit show that Six4Three has been locked in a legal battle with Facebook for two years, The Guardian reports.

A Facebook spokesperson has rejected all of Six4Three’s claims, saying they have no merit and they plan to defend themselves vigorously.

Six4Three, in a legal motion filed last week, claims Zuckerberg had personal oversight over the alleged surveillance scheme and draws on confidential emails involving him and senior executives.

The startup originally sued Facebook after its Pikinis app failed in 2015.

Zuckerberg had allegedly sold expensive ads to developers under the guise that they would have long-term access to users’ personal information. It happened when Facebook shifted its advertising business’ focus from desktops to smartphones, the lawsuit claims.

‘Zuckerberg weaponized the data of one-third of the planet’s population in order to cover up his failure to transition Facebook’s business from desktop computers to mobile ads before the market became aware that Facebook’s financial projections in its 2012 IPO filings were false,’ a court filing stated. 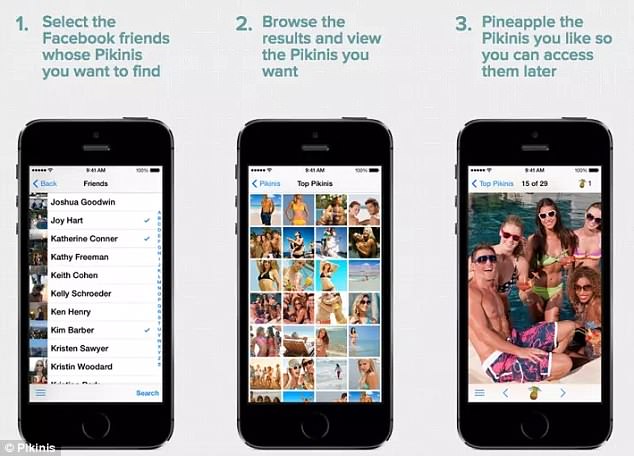 The lawsuit was filed against Facebook by Six4Three – a California startup that was behind the failed app Pikinis, which allowed users to scan their Facebook friends for bikini photos

Six4Three say they were forced to shut down its app when Facebook stopped allowing developers’ access to friends’ data two years ago.

They allege that 40,000 companies were also defrauded in a similar way by Facebook.

The developer claims in its lawsuit that Facebook exploited the private information of its users behind the scenes.

The lawsuit includes claims that Facebook accessed data from people’s microphones and worked on projects to remotely activate Bluetooth in order to track locations.

The mic eavesdropping allegation is not a new theory but a Facebook executive denied the accusation last accusation that the social network listens to users through the devices for targeted ads.