Airline stocks fell sharply after Portugal was removed from the green list and relegated to amber.

The move sent shivers down the spines of investors and traders, with some speculating that a major airline could go under as the sector continues to burn through cash and planes remain grounded.

The UK relaunched travel on May 17 following more than four months of lockdown, with Portugal the only big destination open to UK travellers. But yesterday all hope for a swift return for airline firms was dashed.

Flight fright: The Government’s decision to move Portugal from the UK’s travel green list to the amber list sent stocks in airlines plunging

Danni Hewson, financial analyst at AJ Bell, said no company was immune to the damage and even speculated that British Airways – which is owned by IAG – and Easyjet could suffer.

She said: ‘There could be a big scalp. These companies have to keep massive engines sitting around doing nothing on the tarmac and nobody knows how much longer this is going on for.

Investors need to have a hard look at British Airways which relies on business travel and long haul.’ 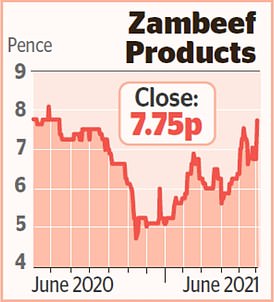 The AIM-listed firm – which supplies pork, dairy, beef, chicken and cereals in Zambia, Ghana and Nigeria – said earnings were expected to be 2,167 per cent higher in US dollar terms than the same period of last year.

This was partly down to rainfall meaning the company had to spend less money on generator fuel.

Zambeef warned trading was still uncertain because of Covid – but shares rose 14.8 per cent, or 1p, to 7.75p.

Dixons Carphone managed to avoid the worst of it as the electrical goods seller took the decision to close all airport stores back in April.

At the time Dixons blamed the Government’s decision to scrap tax-free shopping and the move is looking increasingly wise given the chaos that the travel industry finds itself in now.

Miners were also having a session to forget amid further data out of China showing that the world’s second-largest economy continues to slow this year.

Meanwhile BT’s army of small shareholders got a reality check when a City bank brought out the red pen to declare the shares ‘overcooked’ after a spectacular run since March.

The ‘sell’ recommendation from Deutsche Bank sent shares down 1.9 per cent, or 3.45p, to 176.95p, having been on a charge in recent weeks after chief executive Philip Jansen’s pledge to ‘build like fury’ with £25billion investment in ultra-fast internet speeds.

Those had helped shares to nudge 180p but Deutsche’s Robert Grindle still thinks a price of 140p is more appropriate. But it wasn’t all doom and gloom.

A bright spot came from Johnson Matthey after the speciality chemicals firm was the subject of a big upgrade from analysts at Jefferies.

They believe the shares are worth 4200p, arguing that the market has been too sceptical about the earnings outlook in clean air and the company’s exposure to energy transition materials. Shares jumped 2.3 per cent, or 71p to 3143p.

Further down the market and Pennon shares jumped 2 per cent, or 21.5p, to 1090p after the utilities giant said it will take on more than 1m customers as it expands into Bristol in an £814million deal.

Pennon has agreed to buy the company behind Bristol Water from its US, European and Japanese owners.

But office space operator Workspace slipped after it swung to a loss for the past year as rental income was dented by lockdown restrictions and the shift towards home working. Shares fell 3.2 per cent, or 29.5p, to 883p after it posted a £235.7million loss for the year to March 31, compared with a £122million profit a year earlier.