MARKET REPORT: Asos is all the rage as it plans to move to main market

MARKET REPORT: Asos is all the rage as online fashion giant unveils plans to move to main market of the London Stock Exchange

Online fashion giant Asos soared after unveiling plans to move to the main market of the London Stock Exchange.

The firm’s shares jumped 11.3 per cent, or 255p, to 2514p after it said it aims join the main market by the end of next month after 20 years on its junior counterpart, Aim.

The plans came as the group looks to draw in more investors following a difficult year that has seen its share price drop by over 50 per cent following a profit warning in October and the departure of chief executive Nick Beighton after six years at the helm.

Asos shares jumped 11.3%, or 255p, to 2514p after it said it aims join the main market by the end of next month after 20 years on its junior counterpart, AIM

The announcement was included in a trading update for the four months to the end of December, which saw the company’s sales rise 5 per cent year-on-year to £1.39billion despite supply chain issues and ‘volatile’ demand caused by the Omicron variant.

Despite the share price surge, analysts at broker Liberum cut their target price for Asos to 2300p from 3560p, saying the firm had ‘significant work’ to do this year. 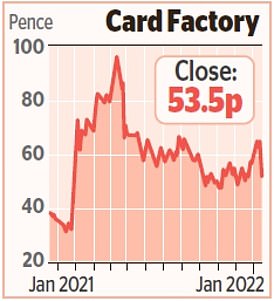 Shares in Card Factory plunged after the greeting cards retailer warned its profit margins will be hit by ‘significant’ pressure from inflation.

It now expects profits for its next financial year to be below expectations. It will be raising prices to reduce the damage.

The gloomy forecast overshadowed better than expected trading in the 11 months to the end of December, which saw it upgrade forecasts for its current year.

Market sentiment wobbled after US inflation hit a 40-year high on Wednesday, rekindling fears that price rises could threaten the global economic recovery.

Inflation worries weighed on major UK retailers and supermarkets, with Tesco down 0.9 per cent, or 2.55p, at 289.7p and Marks & Spencer falling 8 per cent, or 20p, to 233p despite upbeat trading updates.

Oilfield engineer Wood Group gushed to a five-month high after unveiling plans to sell part of its consultancy business.

The shares soared 20.5 per cent, or 40.8p, to 240p after the FTSE 250 group hoisted the ‘for sale’ sign over its Built Environment division, which helps governments and private companies assess environmental risks to buildings and infrastructure. It is expected to be worth around £2billion.

Blue-chip housebuilder Taylor Wimpey slipped 1.6 per cent, or 2.45p, to 159.35p after its largest shareholder reduced its stake.

Los Angeles-based Capital Group, one of the world’s largest investment managers, dumped around 20.4m shares in the firm on Tuesday, reducing its stake to 4.5 per cent from just over 5 per cent.

Recruiters Hays added 2.3 per cent, or 3.4p, to 155.3p after posting a record performance in the three months to the end of December.

The group reported that net fees, its main source of revenue, had surged 37 per cent on a like-for-like basis amid.

Cycling and motoring retailer Halfords inched up 0.6 per cent, or 2p, to 364p after a boom in demand for MOTs helped to boost revenues in the three months to the end of December.

Revenues in the period rose 10.4 per cent on a like-for-like basis compared to pre-pandemic levels.

The FTSE 100 firm highlighted results from an ongoing clinical trial that showed that when given as a third dose its jab caused an increased immune system response to Omicron as well as previous variants of the virus. The shares dipped by the close 0.4 per cent, or 30p, to 8449p.

Meanwhile Bakkavor, which provides prepared food to supermarkets and retailers, dipped 2.4 per cent, or 3p, to 123p as it flagged ‘unprecedented’ challenges during 2021 as it grappled with supply chain disruption, labour shortages and inflation.

Despite this, the firm reported revenues for the year to December 25 were up 4.4 per cent year-on-year, although it warned that the issues facing the business had ‘intensified’ in the final quarter of the year and continued into this year.