Gambling tycoons Fred and Peter Done hit the jackpot yesterday as a bidding war for William Hill added £60million to the value of their stake in the firm.

The brothers, who founded rival bookmaker Betfred, have built a 6 per cent holding in the company this year. And they are now sitting on a tidy paper profit after William Hill was thrust into the centre of a takeover battle.

The firm revealed it is in talks about potential cash bids with both New York buyout firm Apollo Management and Nevada-based casino operator Caesars Entertainment, sending its stock surging 43.5 per cent, or 94.6p, to 312.2p.

The huge rally added £59.6million to the value of the Done brothers’ 63.1m shares, leaving their holding worth £196.8million overall when the closing bell rang.

The pair are together worth an estimated £1.3billion and first started building a stake in William Hill in March.

Fred, 77, and Peter, 73, both left school without qualifications but went on to set up their own firm, Done Bookmakers – now called Betfred – in 1967. The business boasts annual revenues of £621million and nearly 1,600 shops.

Fred Done said earlier this year that they had decided to invest in William Hill because its shares had become ‘cheap’ when fears about coronavirus sent stock markets tumbling. 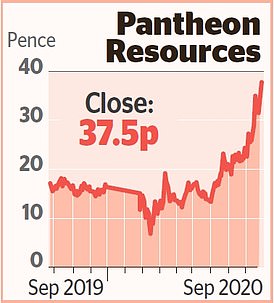 Pantheon Resources’ share price continued its meteoric rise yesterday after it announced an untapped well of 302m barrels of oil.

The AIM-listed oil and gas exploration company, which is based in the United Kingdom, said the find is worth £2.1billion in future sales.

Bosses said it was an ‘extraordinary result’ adding that they ‘never expected’ to discover oil at this stage.

He also said the firm was well-placed to trounce rivals in the US, where rival firms are fiercely competing for a slice of the gambling market which is being opened up.

The Done brothers’ investment has proved to be a lucrative one. Since hitting 20-year lows in March, shares in William Hill have rallied 750 per cent higher.

And the takeover sent them to a two-year high yesterday. Apollo and Caesars have until October 23 to announce an intention to make an offer, or they must walk away.

Elsewhere, British drugs giant Astrazeneca edged up after striking a deal to sell its potential coronavirus vaccine to the European Union at a discount.

In exchange for the lower price, the EU will have to cover compensation costs if the jab causes any unintended side effects among patients.

The vaccine is being developed by Astra in partnership with scientists at Oxford University and is seen as one of the leading candidates globally.

Mass trials are currently under way to test its effectiveness, after earlier tests this year found it appeared to be safe and triggered an immune response.

Less than an hour after trading finished, it was also revealed that Canada had signed a deal with the drugs firm to buy 20m doses of the vaccine.

BP is targeting net zero carbon emissions by 2050 and has unveiled plans to ramp up investments in renewable sources of power such as wind and solar.