BT’s chief executive Philip Jansen has been desperate to convince shareholders that his self-confessed ‘eye-watering’ investment in broadband will pay off.

Now he has put more skin in the game, buying £2million worth of shares as he ramped up his bet on the company’s future.

Since taking over in 2019, Jansen has put more than £10million of his own money into BT, which could prove to be a shrewd move if his spending leads to higher returns down the line, as he believes.

Since taking over in 2019, BT boss Philip Jansen has put more than £10m of his own money into the company

The purchase of 1.25m shares for £1.63 on Friday came just a day after the telecoms giant announced a major new investment plan to ‘build like fury’ on the back of the Government’s post-pandemic tax deduction.

It will aim to connect 25m homes to fibre broadband by 2025 – 5m more than previously planned. 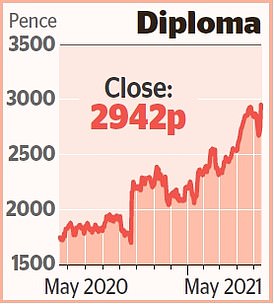 Little-known technical products supplier Diploma was on the rise after boasting of ‘very strong first-half performance’.

The FTSE 250 firm makes seals and controls for specialist equipment, and provides various instruments and services for the healthcare sector.

Revenue jumped 29 per cent to £365.2million in the six months ending in March, and profits climbed 33 per cent to £66.6million.

As the firm upgraded its expectations for the full-year, shares lifted 7 per cent, or 192p, to 2942p.

The blue-chip index was dragged down by airlines and hospitality firms, which had a miserable day despite reopening for the first time since early January.

Fears over the spread of the Indian variant of Covid, along with suggestions from the Government that the lifting of lockdown restrictions on June 21 could be under threat, sent stocks tumbling.

Major pub groups, which have been desperate to get punters back indoors, also took a beating.

Vistry’s fall came despite the housebuilder saying average weekly sales were up 70 per cent on last year and 21 per cent up on pre-pandemic levels.

But the company also warned that signs of inflation were creeping into the housebuilding market, with economic data from the sector showing raw materials are getting more expensive.

Elsewhere Hollywood Bowl said it was ‘well-positioned to recover to pre-pandemic performance’ as it unveiled its half-year results for the six months ending in March.

The numbers were fairly dismal, as the ten-pin bowling company had been closed for 75 per cent of that time, and open with restrictions for the rest of it.

Revenue was down from £69.2million a year earlier to just £12million, and profits plunged from £59.3million to £10.8million.

But that hasn’t stopped the firm from agreeing two sites in Birmingham and Harrow, with 11 more in advanced negotiations.

Though Hollywood Bowl began to open its venues again yesterday, investors were still worried about future restrictions, and shares fell 4 per cent, or 9.5p, to 227p.

Novacyt, one of last year’s stellar stocks, which shot up after developing Covid tests, said its range of products had been included in the NHS England framework for detecting ‘variants of concern’.