BT tumbled to the bottom of the FTSE 100 fallers list amid reports it could be facing a challenge to its dominance of the British broadband market.

Sky, owned by US titan Comcast, is closing in on a deal to invest in the full-fibre broadband roll-out of Virgin Media O2 (VMO2), according to the Sunday Telegraph.

VMO2, a joint venture between telecom heavyweights Telefonica and Liberty Global formed in June, is also in discussions with Talk Talk and Vodafone about potential access.

The plans include VMO2 connecting another 7m homes to its broadband network, a move that will expand its coverage to 80 per cent of the UK and increase competition for BT’s network, Openreach.

Analysts at UBS said a tie-up between VMO2 and Sky could cost BT over £600million in lost revenues, noting that Sky is one of Openreach’s biggest customers spending around £760million annually on fees.

The bank also said most of this revenue could be lost by BT as Sky transferred onto the VMO2 network, the expansion of which will also eat into Openreach’s market share. 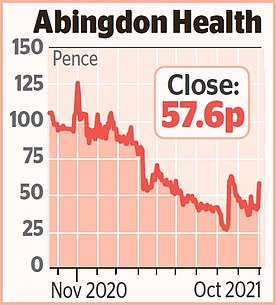 Diagnostics firm Abingdon Health was among the biggest risers on AIM after signing a deal to roll out a rapid Covid-19 saliva test across the UK.

The Know Now test, which has been developed by UK health technology company Vatic Health, is more accurate than PCR and lateral flow tests and does not require a swab to be stuck up the nose.

Under the supply deal, York-based Abingdon, which was formed in 2008, and Oxford-headquartered Vatic Health are aiming to produce 100m tests each year.

However, analysts at Jefferies said that for Sky, investing in the VMO2 venture would be ‘very risky’ and the company would give up an opportunity to leverage its current deal with Openreach.

The broker also flagged that the timeframe and cost of the VMO2 broadband expansion would be ‘highly uncertain’.

Investors were spooked by the suspension of shares in debt-laden Chinese property giant Evergrande in Hong Kong, which once again sparked fears that it is on the brink of collapse.

There is speculation that the crisis-hit business will sell its profitable property management arm in a bid to ease pressure on its cash reserves.

The rally came as members of the Opec cartel of oil-producing countries met to discuss a rise in production as the post-pandemic recovery led to red-hot demand.

Meanwhile, ecommerce giant The Hut Group (THG) fell 3.3 per cent, or 15.2p, to 440p after some of its major backers sharply cut back their stakes in the firm amid fears of a break-up.

Goldman Sachs has slashed its holding in recent days, selling around £180million in stock, according to the Mail on Sunday.

THG’s shares dropped below their 500p IPO price for the first time last Friday following a series of announcements that appeared to indicate that the group is heading for separation.

These include a £1.2billion option for Japanese conglomerate Softbank to acquire a fifth of its THG Ingenuity business as well as plans to spin off its beauty segment.

Sports Direct owner Frasers Group tumbled 6.9 per cent, or 46p, to 620p as it was hit by a double downgrade by analysts at Bank of America Merrill Lynch. The bank knocked the stock to ‘underperform’ from ‘buy’.

Catering firm Compass also slipped 2.7 per cent, or 42.5p, to 1516p after the surprise departure of its chief financial officer Karen Witts, who will step down at the end of this month after only two and a half years in the role.

She will be replaced by commercial director and company veteran Palmer Brown, who served as interim chief financial officer in 2018 and 2019.