Housebuilding stocks started the week with a bang as hopes grew that Rishi Sunak will hand the industry two boosts in tomorrow’s Budget.

Reports suggest that not only will the Chancellor offer an extension to the stamp duty holiday but also a mortgage guarantee scheme to help get more young people on the property ladder.

The stamp duty holiday on home purchases under £500,000 has been in place since July and has been credited with pushing up sales during the pandemic.

The measure was due to run out at the end of this month but, according to the current chatter, will be extended until the end of June.

Although the holiday on the tax has been well received, some analysts have questioned it recently – wondering how long it can artificially lift the market.

But perhaps their worries will be soothed by suggestions in the weekend papers that the Government is planning to fund a mortgage guarantee scheme that would allow buyers to pay a deposit of just 5 per cent on homes worth up to £600,000.

Traders were buoyed by the reports of the double whammy of assistance, snapping up shares in housebuilders before tomorrow’s big reveal. 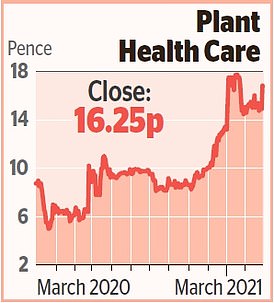 The AIM-listed science business is in talks with several companies about the treatment, named Saori, and some firms are already conducting their own tests.

Building materials supplier and Wickes-owner Travis Perkins also climbed in anticipation of the housing pledges, rising 2.8 per cent, or 40.5p, to 1478p.

Digger and drill hire company Speedy Hire, another group that will benefit from increased infrastructure and home construction, also gathered pace, rising 5 per cent, or 3.2p, to 67.2p after it upgraded its profit estimates for the year to the end of March.

Although surges among builders and miners led the Footsie higher, the blue-chip index’s top riser was British Airways-owner IAG.

On Friday IAG shares rose despite the airlines conglomerate posting an eye-watering £6.8billion loss, as Covid laid waste to the travel industry in 2020.

Yesterday positive takes from brokers at Peel Hunt and Credit Suisse helped send shares up 7 per cent, or 13.35p, to 205.3p.

Peel Hunt analysts upgraded IAG to ‘buy’ from ‘hold’, while Credit Suisse kept its rating on ‘outperform’ but said the company will be ‘even more competitive’ after the pandemic because of a wide-ranging restructuring at the Aer Lingus and Iberia owner.

Barclays brokers helped set off a rally in utility company Pennon shares (up 5.5 per cent, or 48.2p, to 922.2p) by upgrading its stock from ‘equal weight’ to ‘overweight’.

Profits at business supplier Bunzl (up 0.8 per cent, or 18p, to 2255p) jumped by more than a fifth to £556m as the pandemic sent companies scrambling to buy in cleaning and safety products, from toilet rolls to providing supermarkets with packaging – with orders for gloves, gowns and disinfectant surging last year.

Portable power generator provider Aggreko, however, swung to a £73million loss – from a £199million profit the year before – as it was hit with a cocktail of bad debts, fleet writedowns and disruption to business. But shares rose 1.3 per cent, or 10.5p, to 810.5p, as it said business was improving and promised to pay a 15p per share dividend for the year.