Budget retailer B&M suffered a sharp drop in UK sales as a pandemic-induced boom showed signs of slowing following the end of lockdown.

For the six months to September 25, the business’s UK revenues were down 5 per cent year-on-year on a like-for-like basis. Although overall revenues rose 1.2 per cent to £2.3billion.

Profits fell 6.2 per cent to £238million. B&M was facing a tough set of comparatives from last year when lockdown allowed it to stay open as an essential retailer and take advantage of a surge in consumer demand for its low-cost products.

Sales slump: B&M revenues were down 5% year-on-year on a like-for-like basis. Although overall revenues rose 1.2% to £2.3bn

The group also warned that the opening of five new stores may be delayed until next year, while its Heron Foods business, which focuses primarily on frozen food, was facing ‘more challenging trading conditions’ as grocery shopping levels normalised following the end of lockdown.

The shares dropped 5.6 per cent, or 36p, to 607.8p amid worries sales momentum could be pumping the brakes.

Despite the slowdown in sales, B&M said it had ‘good stock availability’ heading into the peak Christmas trading season, having ordered its festive stock earlier than normal due to the disruption in global supply chains. 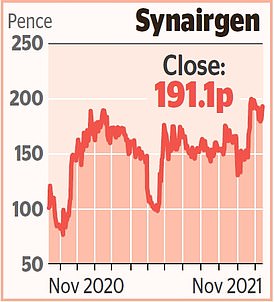 Synairgen shares jumped after the pharma firm recruited 610 patients from 17 countries for the final stage trial of its treatment for Covid-19.

SNG001 is an inhaled treatment that is designed to reduce the severity of Covid-19 symptoms as well as other respiratory illnesses.

Data from the trial is expected in early 2022, with Synairgen – founded by professors Sir Stephen Holgate, Donna Davies and Ratko Djukanovic – planning to apply for the treatment to receive Emergency Use Authorisation from the US Food and Drug Administration (FDA).

‘We have responded decisively to supply chain challenges by leveraging our strong supplier relationships and we have improved in-store execution.

As a consequence, we are fully stocked heading into the Golden Quarter, with stores already showcasing our excellent Christmas ranges,’ said chief executive Simon Arora.

The results also found support from analysts at Peel Hunt, who said they were ‘highly impressive against such a tough comparative’.

‘We have learned to expect brilliance from B&M, and should not be disappointed when trading is only “good”, but the market does not work like that,’ the broker added yesterday.

The rise means the blue-chip index is within striking distance of 7,400, a level it last reached in February 2020 before the onset of the pandemic sent global markets plunging.

Traders appeared to shrug off a slowdown in UK economic growth, which was hit by supply chain disruption and rising prices. Stocks also found support from weakness in the pound, which dropped to its lowest level so far this year.

Mid-cap gold miner Endeavour also jumped 3.5 per cent, or 70p, to 2100p as the firm predicted that it would beat production guidance for 2021.

The group has produced 1.1m ounces of gold so far this year, which it said positions it well to beat full-year predictions of between 1.36m and 1.5m ounces.

The profit surge followed strong returns from the group’s private equity portfolio, which posted an investment return of £2.4billion in the period, up 27 per cent year-on-year.

It wasn’t all good news, however, with 3i finance director Julia Wilson announcing plans to retire after the company’s AGM next June.

Defence firm Qinetiq dropped 1 per cent, or 2.8p, to 267.2p after earnings were hit by technical and supply chain issues at one of its projects.

Profits for the six months to the end of September stood at £53.4million, down from £69million in the same period last year, which was attributed to a £14.5million writedown on the contract.