Investors rushed to snap up shares in Lookers after the car dealer said it would smash profit forecasts following a lockdown sales boom.

Sales were unexpectedly strong during the first three months of the year even though all the company’s sites were forced to close.

Lookers shifted 44,000 cars through its online platforms and ‘click and drive’ services.

Online boom: Sales at car dealer Lookers were unexpectedly strong during the first three months of the year even though all the company’s sites were forced to close

In the same period last year – almost all of which was before the first lockdown that took place on March 23 – it sold 49,000.

The surprisingly rip roaring trade during the first quarter means Lookers’ full-year profits will be ‘materially ahead’ of City estimates of £22.6million.

And another piece of good news in the trading update was that Lookers’ new car sales, which were flat, outpaced a drop in the wider industry.

Sales fell by 12 per cent on average compared with the first three months of last year, according to the Society of Motor Manufacturers and Traders. 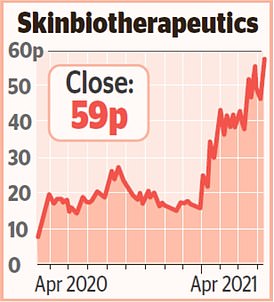 Skinbiotherapeutics has teamed up with the University of Manchester to look at what role bacteria known as microbiome that live on the skin play in skin inflammation.

The two-year study by the AIM-listed group and the university will look if particular mixes of bacteria could be put into products such as creams and gels to help soothe inflammation more quickly.

This could help treat sunburn or conditions such as acne.

This is the second profit upgrade in as many months for Lookers, which has also been battling a fraud scandal that saw profits overstated by £25.5million over several years.

The Financial Conduct Authority has closed the investigation – but the Financial Reporting Council is looking into Deloitte’s audits of the group.

Lookers’ outlook is about to get even better – as dealerships will join other non-essential retailers in reopening their doors on Monday. The company’s shares surged 14.4 per cent, or 9p, to 71.6p.

The update also revved up rival Pendragon, which has already been on the rise this week following an upgrade by brokers at Liberum on Tuesday. Its stock jumped 9.1 per cent, or 1.6p, to 19.2p last night.

Surging online sales during the first three months of the year at Dunelm will help it ‘modestly’ beat profit estimates of between £120million and £125million.

However, this will hinge on most of its 174 shops being able to reopen on Monday and no further lockdown restrictions being reintroduced before the financial year ends in June.

And Johnson Matthey revealed that earnings in the year to the end of March would be at the top end of a forecast between £405million and £502million.

While the Footsie reached its highest level for 13 months, the index was held back from making stronger gains by oil majors BP (down 2.3 per cent, or 7p, to 298.45) and Shell (down 2 per cent, or 28p, to 1346.4p), which slid after data from the US showed a rise in the country’s gasoline stocks.

Mining giant Anglo American, on the other hand, was a hit with traders after unveiling plans to spin off its thermal coal division.

Miners such as Anglo (up 3.2 per cent, or 96p, to 3084p) have come under criticism for operating coal mines from investors who want them to do more to tackle climate change.

Thermal type of coal is burned for power and releases huge amounts of carbon.

The new company, Thungela Resources, will be listed in Johannesburg and London, with existing Anglo investors getting one share in the new group for every ten they own in Anglo.

Exhibition and conference organiser Hyve Group (up 0.9 per cent, or 1.1p, to 131.2) held 12 in-person events in Eastern Europe and Asia in the first half – but said turnover is likely to drop 90 per cent to £10million in the six months to March.