Profits and turnover soared on the back of higher sales in its cyber security business, new contract wins and work on space projects, which included a role in the Space X Nasa Crew Dragon mission to the International Space Station.

It also benefited from sites near Salisbury, Wiltshire, and in Australia being up and running for the whole financial year to October 31. Defence firms in general have fared better than those in other industries because they kept operating during lockdowns.

Profits rocketed by two-thirds to £43million, while turnover was up 20 per cent on the previous year to £403million.

It was boosted by Ministry of Defence contracts to provide decoy flares – a defensive measure to confuse heat-seeking missiles – worth £31million just before the end of the financial year.

The good run looks set to continue as the group already has 78 per cent of next year’s revenues covered by its order book.

An 8pc increase in the dividend to 3.9p per share gave dividend-starved investors a welcome boost and FTSE 250-listed Chemring was the top riser on the mid-cap index, jumping by 10.7 per cent, or 29p, to 300p. 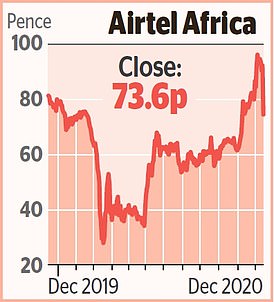 Shareholders put the phone down on telecoms group Airtel Africa after a mystery investor sold 60m shares – 1.6 per cent of the company – for 80p each overnight, netting £48million.

This tends to happen to firms when there are large stock sell-offs.

But the 80p sale price – 13 per cent cheaper than the actual closing price on Monday – wouldn’t have helped.

Over on AIM, online estate agent Purplebricks was also on a roll as shareholders celebrated a profit upgrade.

It racked up a record profit of £4.3million in the six months to October, beating expectations, and it reckons full-year earnings will be ahead of the range analysts have forecast.

Although the spring lockdown virtually put the housing market into hibernation, since its reopening in May pent-up demand and the stamp duty holiday have helped sales rebound.

Customers have taken to virtual viewings and downloads of Purple- bricks’ app have soared. Shares rose 17.7 per cent, or 13.4p, to 89p.

Its gains were not reflected in the wider market.

Plane engine maker Rolls-Royce had a dismal day, falling 2.9 per cent, or 3.45p, to 115.3p after brokers at Panmure Gordon slapped a ‘sell’ rating on its stock.

Rolls has rallied since Pfizer announced it had a viable Covid vaccine at the start of November.

But Panmure analysts said vaccines are ‘not the cure’ for aerospace companies and that airlines could demand price reductions or credit extensions from their suppliers, which could include the likes of Rolls.

Elsewhere, the dealmaking bonanza continued apace. Power group Drax was on the up, rising 2.7 per cent, or 8.8p, to 339p, after it sold its remaining gas turbines to VPI Holding in a deal that could be worth up to £193million.

It means Drax will be focused on biomass, the burning of plant materials to produce energy.

And Dublin-based Keywords Studios closed 11.5 per cent higher, up 94p to 2564p, after it bought video game developer High Voltage for up to £37million.

It is the latest in a string of takeovers and mergers in the industry, which boomed during lockdowns and social distancing restrictions. High Voltage has worked on games such as Fortnite and Mortal Kombat.