On a day when much of the market was faltering, NCC shot to the top of the FTSE 350 leaderboard after it struck a £156million deal to buy Iron Mountain’s Intellectual Property Management (IPM) business.

The takeover is being part-funded by a £70million share sale.

Manchester-based NCC provides a wide range of cyber-security services – but both it and IPM work in software escrow.

This means they work as a third party with software suppliers and their customers.

Suppliers can periodically put software codes into NCC’s physical or virtual vaults, which can then be accessed by their customers. This keeps the products safe and means they can be accessed in an emergency. 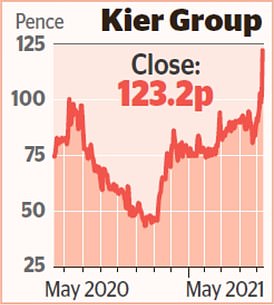 Boss Andrew Davies said the fundraising – announced in April – would be the ‘final milestone’ of a restructuring that began in 2019. Kier will put the cash towards paying its £436million debts and bolstering its balance sheet.

It comes weeks after the firm sold its housebuilding arm to a firm owned by financier and Terra Firma founder Guy Hands for £110million.

It is also a rapidly growing field.

Iron Mountain’s IPM arm works with blue-chip American companies – including the ‘majority’ of the Fortune 500 – and other US institutions.

NCC boss Adam Palser said there were ‘tremendous opportunities’ to grow the combined businesses and that it could start offering other services to IPM’s big-name clients.

NCC – which began life in June 1999 when the National Computing Centre sold its commercial divisions to its management team – rose 14.2 per cent, or 36p, to 290p by the close.

Schroders recently abandoned the idea of buying M&G and the mulling never even resulted in talks, Bloomberg reported.

Resources stocks are some of the biggest companies on the Footsie – and even if they only each fall by a couple percent it can drag down the whole market.

This was partly because the Colonial Pipeline restarted on the East Coast of the US, easing concerns the region would be hit with gasoline shortages.

The pipeline had shut down for five days following a ransomware cyber-attack.

Chemicals giant Elementis rallied after it said business was picking up and that its full-year performance would be at the top end of forecasts – which estimates profits will be between £66million and £74million.

Elementis was founded in 1844 to trade in tea and coffee but now makes specialist chemicals used in products such as deodorants, lipsticks and paints.

The mid-cap group has been the subject of several takeover approaches from American rivals in the last year but turned them down. Shares in the group rose 5.4 per cent, or 7.6p, to 147.7p last night.

David Beckham’s Guild Esports slumped 7.5 per cent, or 0.55p, to 6.8p after it launched its second limited-edition clothing range.

The esports company floated last October and is setting up its own teams to compete in online game tournaments, as well as building a talent academy to recruit and train players. It plans to launch further clothes collections too.