MARKET REPORT: Shares in Daily Mirror publisher Reach fall 27% after it warns profits will be lower than hoped

Shares in Reach Plc tumbled after the Daily Mirror owner warned its profits would be lower than hoped.

The newspaper publisher, which also owns the Daily Express and Daily Star, said its profit for the year would fall short of the £112.8million predicted by analysts.

Shares fell 26 per cent, or 28.4p, to 81p following the news. The downgraded forecast came as it reported revenues fell 4.2 per cent in the three months to December.

Shares slump: Newspaper publisher Reach, which owns the Daily Mirror, Daily Express and Daily Star, said its profit for the year would fall short of the £112.8m predicted by analysts

Price increases helped circulation revenue rise 1.8 per cent during the period but the gains were wiped out after income from print advertising tumbled 20.2 per cent. Digital revenues were down 5.9 per cent.

The fall in revenues was driven by clients choosing to spend less money on marketing during Black Friday and Christmas.

The group, which has cut costs to soften the blow, has set a target of saving around £30million this year.

But this could result in the loss of around 200 jobs. Panmure Gordon analyst Johnathan Barrett said there was huge value in Reach’s digital audience and it could become a takeover target for ‘any media company with the financial firepower who is looking for online consumer audiences’.

Back in London, car dealership Lookers hiked its profit forecast for the year to more than £80million, up from a previous estimate of ‘not less than £75million’ after strong trading.

Its new car sales climbed by 4.1 per cent in the three months to December, outperforming the industry’s 1 per cent growth. 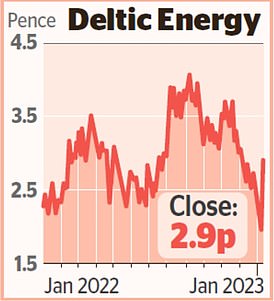 Deltic Energy investors cheered after its joint venture discovered gas in the southern part of the North Sea.

Gas has been found in an operation led by Shell to drill the Pensacola well.

Shell has a 65 per cent working interest in the operation, followed by Deltic on 30 per cent, with the rest owned by Dutch-based One Dyas.

A full well test will now be conducted and is expected to take around 30 days.

Used car sales and revenue from servicing were both nearly 10 per cent higher than the same period during 2021. Shares gained 5 per cent, or 3.9p, to 81.8p.

Topps Tiles is set to meet its target to increase its market share to 20 per cent by 2025, ahead of schedule.

The flooring retailer said sales were 10.2 per cent higher in the 13 weeks to December compared with a year earlier. At the end of October its market share was 19 per cent. Its shares fell 0.6 per cent, or 0.3p, to 46.8p.

Bowling alley operator Ten Entertainment Group hailed a record-breaking year as sales rose nearly 90 per cent for the year to January 1, meaning it now expects annual profit to be close to £26million. Its shares were up by 0.2 per cent, or 0.5p, to 293p.

Less than a week after the largest bank in the United Arab Emirates walked away from tabling an offer, Standard Chartered embarked on a hunt for a new owner of its aviation finance business.

There was some respite for the recruitment industry after Page Group insisted it continued to see ‘candidate shortages and good levels of vacancies’.

The outlook came even though it suffered a weaker final quarter of 2022.

As a result, Page Group expects an annual profit of £195million, down on a previous estimate of £204million.

It followed a bleak update from rival Robert Walters 24 hours earlier which sent shares across the industry tumbling.

Ferrexpo boss Jim North hailed the ‘determination’ of his workforce after it produced 6.1m tons of pellets in a year blighted by the Ukraine war, which battered the iron ore miner’s production, with 2022’s volume nearly half that of the previous 12 months.