Ferrexpo shares soared after Ukraine reclaimed territory from Russia in a remarkable counter-offensive.

After more than six months of Vladimir Putin’s war in Europe, reports over the weekend said Ukrainian troops outnumbered Russian forces by eight to one as they pushed them out of north-eastern Kharkiv.

Shares in Ferrexpo, which operates in Ukraine and is the world’s third-largest exporter of iron ore pellets for the global steel industry, surged 11.3 per cent, or 17.6p, to 173.7p on the news.

Bounce back: Shares in Ferrexpo, which operates in Ukraine and is the world’s third-largest exporter of iron ore pellets, surged 11.3%, or 17.6p, to 173.7p

It marks a change of fortune for the FTSE 250-listed miner’s stock which has taken a hit this year following the outbreak of war.

In April, the group ramped up its humanitarian fund to £10.7million to assist with the crisis unfolding in Ukraine.

Only two months later Ferrexpo delayed its interim dividend and also lowered its iron ore production after a transport route in Ukraine was damaged.

But Ferrexpo shares have been helped by the latest slide in the US dollar and higher iron ore prices, analysts said.

It came as official figures showed the economy grew by 0.2 per cent in July following a 0.6 per cent slump in June. 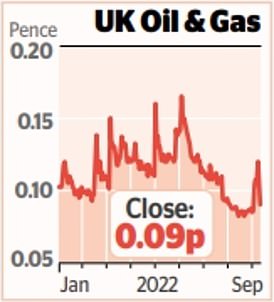 The energy company raised £3million, but the placing price of the shares was around 20.3 per cent below the stock’s previous close.

It was done to provide it ‘with a source of general working capital’.

It also wants to use the money to complete one of its programmes in Turkey.

‘Sporting events distracted people from their personal budgeting headaches and the incredible success of the England Women’s football team [winning Euro 2022] bathed the country in a warm glow.

‘But even in celebration there was an undertone of caution and July’s rather anaemic growth came in below expectations, a factor which will add to concerns that the UK is slowly marching towards recession.’

Ferrexpo was not the only miner making gains as the price of metals such as copper, zinc and tin rose.

Antofagasta shares were up after it reassured investors there has been ‘no material impact’ to the expected completion date of the Los Pelambres project.

Chile, which is the world’s largest copper mine producing country, last week instructed the miner to press pause on its marine works at the Los Pelambres site after waves knocked over a construction platform at the copper mine.

Antofagasta said it has already recovered some of the equipment, with the rest expected to follow when the weather improves. Shares rose 1.7 per cent, or 20p, to 1215.5p.

He warned the industry’s ‘darkest hour’ was yet to come and further downgrades to profit guidance were likely – but a fall in inflation over the longer term will ease pressure on the sector.

He said these retailers will ‘ride the still choppy economic waters and emerge into better times in good shape’.