A short while ago investors had written off consumer magazine publishers, an industry hard-hit by declining ad spend and readership numbers.

Future Publishing was firmly in that bracket, but has undergone a dramatic turnaround over the last seven years.

Back in 2015 Future’s online revenues contributed just £1million to the group earnings but yesterday they came in at £85million for the half-year.

Much of the credit has gone to boss Zillah Byng-Thorne, the former Auto Trader chief executive who joined in 2014.

She was brutal in the early stages of her reign and put Future’s entire British staff on redundancy notice.

She axed failing magazines and focused on titles that wrote about people’s hobbies and could generate revenues online. Titles include Four Four Two, Golf Monthly, Horse and Hound, and Country Life. 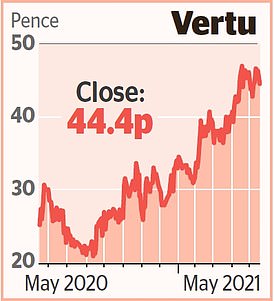 Vertu Motors investors were jittery after the world’s fourth largest car maker Stellantis said it will end contracts with all its dealers in Europe with two years’ notice.

Vertu, which has 27 sales locations with Stellantis franchises finds out in July if it will keep its franchises.

It said: ‘The board is confident the reorganisation of the Stellantis network will have a positive impact on the group’s operations and the scale of its activities.’

The strategy paid off and Future is now a FTSE 250 firm, while Byng-Thorne is line for a whopping £40million bonus should targets be met this year.

But inflation fears dogged the markets. UK inflation more than doubled in April, as a rise in energy and clothing costs drove prices higher, prompting chatter that interest rates would have to rise.

Shell’s falls come as the firm said it was in talks with the Nigerian government to sell its oilfields in the west African country.

Shell has struggled for years with spills in the Niger Delta as a result of pipeline theft and sabotage as well as operational issues.

Chief executive Ben van Beurden has come under increasing pressure to set out a coherent environmental strategy and shareholders have been unimpressed with the spills.

But not everyone is happy with the sell-off and the ESG agenda at Shell, amid fears the firm could miss out on earnings if oil prices rise over the next two years. ‘Go woke, go broke,’ one trader quipped.

There were only a handful of risers on the premier index yesterday, including US-focused Ferguson which posted a 65 per cent rise in quarterly profit. Shares added 2.2 per cent, or 202p, at 9472p.

Funding Circle also revised up its earnings estimates after its involvement with the Covid support scheme gave a boost. The number of loans under management hit a record high in 2020.

Samir Desai, chief executive of Funding Circle, said: ‘Our machine learning and technology platform is transforming the small business borrowing experience and as a result of Covid we are seeing an acceleration in the adoption of online borrowing, which has opened up an enlarged opportunity for Funding Circle.’ Shares were up 7.8 per cent, or 11.6p, at 160p.

But BAE Systems fell even though the defence giant said it would hit expectations this year and announced a fresh £115million contract with the US Navy.