Shares in Warhammer maker Games Workshop soared as it said it had beaten forecasts again.

The retailer, which makes models and figurines that can be collected and painted, has had a stellar year after it found success with adult fans looking for hobbies they could do during lockdown.

Sales in the three months to August hit £90million, compared with £78million in the same period of last year, it said in a trading update.

Games Workshop, which makes models and figurines that can be collected and painted, found success with adult fans looking for hobbies they could do during lockdown

Online and trade sales are strong at the Nottingham-based group –though the business’ shops are ‘still recovering’.

Operating profit is expected to be around £45million, up from around £38million, and it will dole out a 50p-per-share special, one-off dividend, worth £15million.

Longtime investors have benefited from a soaring share price, which has risen 60 per cent this year and 172p since its low in March.

AJ Bell investment director said there is ‘no question that Games Workshop is a winner on the stock market’. Yesterday it jumped 11.8 per cent, or 1025p, to 9750p. 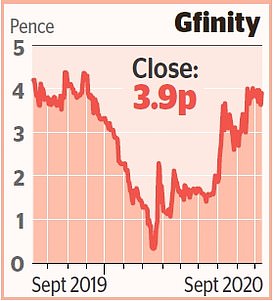 Esports group Gfinity rose 4.1 per cent, or 0.15p, to 3.79p after it was put in charge of a knockout gaming tournament organised by chocolate-maker Cadbury.

The group will run the Cadbury Heroes Parents League, held at the Gfinity Arena in London in November. The tournament will pit 12 two-person teams against each other.

Each pair will feature a gaming ‘influencer’ – those watched by millions as the play video games online – and one of their parents.

Another big winner on the stock market was TT Electronics, following the launch of a 20-second coronavirus test it has manufactured.

The small-cap group has worked with private technology group iAbra to develop the Virolens test, which uses a holographic microscope to examine saliva samples from a mouth swab.

The almost instantaneous results caught the eye of Heathrow early on – and it has now been endorsed and trialled by Europe’s busiest airport, which is keen to roll out mass Covid testing so that regular flying can start up again.

Because the devices use microscope technology, the makers claim the results are close to 100pc accurate and better at detecting asymptomatic carriers than the usual NHS swabs.

Hartlepool-based TT Electronics has already received £2million of orders from iAbra – which will sell the testing kits and cartridges on to customers including Heathrow and a division of the US defence behemoth Lockheed Martin – but around £280million of orders could be in the pipeline. Shares surged 40.5 per cent, up 77p, at 267p.

In other Covid news, Astrazeneca boss Pascal Soriot insisted that his company could still deliver a vaccine ‘by the end of this year, maybe early next year’, despite a late-stage clinical trial being temporarily halted because a patient fell ill.

The wider market also finished in the red, as traders fretted about disagreements over Brexit terms between the UK and EU.

Grosvenor Casino and Mecca Bingo operator Rank Group bosses struck an optimistic note, with chief executive John O’Reilly saying it is well-equipped to ‘return to full strength’, despite plunging to a £22million loss and cutting its dividend. Shares climbed 0.3 per cent, or 0.4p, to 125p.

Cineworld (down 6.1 per cent, or 3.23p, to 49.55p) languished near the bottom of the FTSE 250 leaderboard after Morgan Stanley trimmed back the target price on its shares from 60p to 45p.

Pub group Fuller’s, meanwhile, rose 5.1 per cent, or 28p, to 578p, after reporting it has reopened more than 90 per cent of its pubs and hotels.

It said it got a welcome boost from the Government’s Eat Out To Help Out scheme.