Hornby suffered the biggest sell-off among a host of retailers that updated the market on trading during the festive period.

The model train company, which also makes Scalextric cars and Airfix model planes, plunged 15.5 per cent, or 4.5p, to 24.5p on the news it would make a ‘modest’ loss for the year to March.

Sales during the key Christmas trading period between October and December were ahead of the previous 12 months.

Off the rails: Model train company Hornby, which also makes Scalextric cars and Airfix model planes, plunged 13.8% on the news it would make a ‘modest’ loss for the year to March

And total group sales so far during the company’s financial year were up 6 per cent on the same period in 2021.

But Hornby said sales were still ‘behind budget’ as the worsening economic climate took its toll.

The company added that it remained ‘cautious’ for the full year outlook and beyond amid fears sales could be weighed down by high inflation and rising mortgage costs for shoppers.

Games Workshop, meanwhile, celebrated the milestone of raking in more than £200million of sales in its half-year results for the first time.

The Warhammer figurine maker saw its revenue hit £212.3million in the six months to November 27, up from £191.5million a year earlier.

There was better news for other retailers. Card Factory saw its sales rise to £432.6million for the 11 months to December, up from £337.3million during the same period in 2021. 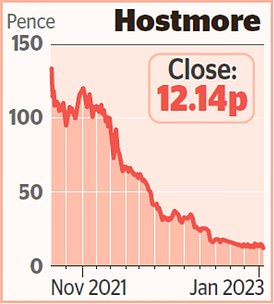 The chief executive of the owner of restaurant group Fridays has resigned amid muted sales growth.

Shares in Hostmore plunged 13.4 per cent, or 1.88p, to 12.14p after Robert B Cook stepped down from his role. Its brands include 63rd+1st and Fridays – recently rebranded from TGI Fridays.

Revenues in December were £21.3million, marginally higher than the £21.2million it posted over the same month last year.

Revenues for the 26 weeks to January 1 were 14 per cent below pre-pandemic levels from 2019.

The greetings card retailer said its profit for the current financial year should be at least £106million compared to market expectations of £96.9million. Shares rose 5.1 per cent, or 4.4p, to 91.6p.

Likewise, online electricals retailer AO World raised its profit forecast to a range of £30million to £40million for the year to March after cutting costs.

But the group saw its UK revenues slump 17.2 per cent in the three months to December compared with the same period a year earlier. Shares fell 5.4 per cent, or 3.75p, to 65.85p.

There was little to cheer for investors in mid-cap stocks.

ITV tumbled 6.7 per cent, or 5.46p, to 76.02p over fears the broadcaster behind hit shows such as Love Island, I’m A Celebrity and Coronation Street may struggle to weather an advertising downturn.

Morgan Stanley flagged concerns that the company ‘may have underperformed its 2022 advertising guidance’ while demand for its flagship streaming service ITV X has ‘softened in recent weeks’.

As a result the broker cut its target price on the stock to 44p from 47p. It was the start of what could turn out to be a very difficult week of trading updates within the recruitment industry.

Robert Walters tumbled 3.3 per cent, or 18p, to 522p after it warned that profit for the year would reach a high but still fall short of analyst expectations.

The company’s net fee income rose 11 per cent to £105.3million in the three months to December. But recruitment activity levels softened during the period, it said.

Shipping broker Clarkson fell 7.9 per cent, or 250p, to 2935p after HSBC lowered its rating to ‘hold’ from ‘buy’. This came less than a week after the company said its profit for the year to December should beat analyst estimates.

A brutal start to the year for Frontier Developments was made worse after Stifel slashed its target price to 525p from 1250p.

It comes after the video game maker plunged 43 per cent on Monday having issued a profit warning following a grim Christmas. Shares tumbled 11.7 per cent, or 67p, to 506p.