Fears house buyers will permanently shun London for the countryside after the pandemic have been over-egged – at least according to the boss of Berkeley Group.

Berkeley specialises in building houses and flats in London and the South East.

It has a knack for building high-end projects on brownfield sites, such as around the old Battersea Power Station and the Nine Elms development south of the Thames.

Profits up: Housebuilder Berkeley specialises in building houses and flats in London and the South East

The company rode the wave of the property price boom in the year to April, revealing yesterday that its homes sold on average for £770,000 – almost £100,000 more than the year before.

In addition to the price jump, more houses were sold than in 2020. This sent revenues 15 per cent higher to £2.2billion and profits up 3 per cent to £518million.

From the first lockdown, the received wisdom quickly became that Britons would be keen to uproot themselves from cities and move out to the suburbs and beyond. 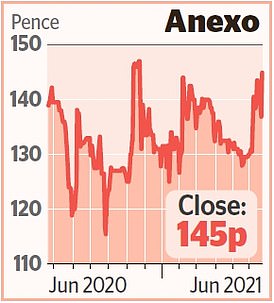 Anexo jumped after its largest shareholder, asset manager Dbay, said it was considering a 150p per share takeover offer.

AIM-listed Anexo offers a credit hire service to no-fault drivers who have been in car accidents but cannot not afford a replacement vehicle.

The company has a legal team which can help these customers recover the insurance money – and use that cash to pay the credit back.

Founder Alan Sellers and others might take part as co-offerers with Dbay, which has a 29 per cent stake in Anexo.

Richard Hunter, head of markets at Interactive Investor, described the company’s exposure to the capital as ‘both a blessing and a curse’.

But Perrins does not believe Covid has brought on any fundamental structural shifts that would harm a city like London, where people ‘thrive on its energy, opportunity and unparalleled attributes’.

There will also still be a continuing under-supply of homes in London and the Home Counties that should keep demand robust.

Enquiries about properties in London, Perrins also noted, are at a higher level than before Covid struck.

As well as selling houses and acquiring ten new sites, Berkeley also handed back £334million to shareholders last year through a mix of dividends and buybacks.

Other major house builders, however, had a much harder day after the Competition and Markets Authority made more progress tackling unfair leasehold policies.

Miners were higher too as copper prices rose for the third straight day. Anglo American advanced 1.1 per cent, or 30p, to 2822p, as it also reported diamond sales at its prestigious De Beers business were rocketing.

The value of precious stones sold in its fifth auction of the year increased to £337million – up from £275million in the previous round.

Shareholders cheered a turnaround plan at funeral director Dignity. Boss Gary Channon – who ousted Clive Whiley in a boardroom coup earlier this year – said he wanted the company to have a 20 per cent share of the funeral market in ten years’ time.

It has about 12 per cent. Dignity shot up 13.3 per cent, up 85p, to 724p, despite warning profits will be down ‘slightly’ because of a marked drop in UK deaths since April, as Covid deaths fell.