Tobacco giant Imperial Brands lost some heat as it warned the lifting of lockdown restrictions is hitting cigarette sales.

The owner of Lambert & Butler and Rizla said that while the effects of the pandemic had benefited its cigarette business, this was ‘beginning to reduce’ as lockdown rules eased and would unravel further next year.

Imperial also said its cigarettes and cigars business is losing market share. Despite this, the company said it was on track to meet its full-year expectations, with revenues on course to grow by 1 per cent as a result of higher tobacco prices.

Stubbing it out: Imperial Brands said that while the effects of the pandemic had benefited its cigarette business, this was ‘beginning to reduce’ as lockdown rules eased

The group also flagged ‘significantly reduced losses’ in its new generation products (NGPs), which include its Pulze heated tobacco and blu vapour brands. Both are considered to be healthier than traditional cigarettes.

The plans include an expansion of NGP sales in Europe and the US, as well as boosting profitability in the firm’s top cigarette markets – the UK, US, Australia, Germany and Spain. 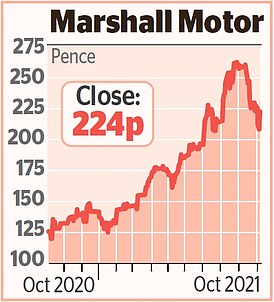 The company said that low supplies of new cars due to a shortage of computer microchips had caused the prices of used vehicles to surge.

The firm flagged that in the third quarter of the year the value of second-hand cars rose by 13 per cent on average.

As a result, Marshall said it expects to report a profit of at least £50million for 2021, £10million higher than its previous forecast last month.

‘Imperial’s pressing forward with its strategy to focus on quality rather than quantity when it comes to its global footprint… with the number of smokers dwindling, the only lever to pull is hiking prices.

Having a commanding market share and recognisable brand name is paramount’, said Laura Hoy, an analyst at Hargreaves Lansdown.

‘Combustibles is still the growth engine, but NGPs is ultimately the future. So far, it’s had a lukewarm reception, but management’s managed to trim some of the fat by exiting less profitable markets.’

The shares declined 3.8 per cent, or 58.5p to 1495p as investors fretted about the risk to cigarette sales.

Matters were also not helped by wild swings in the price of natural gas.

Recruitment firm Page Group was one of the biggest mid-cap risers, jumping 7.8 per cent, or 48p to 660.5p as it hiked its profit guidance amid a post-pandemic rebound in the jobs market.

The company said growth had been spurred in its third quarter by a hiring boom in the tech industry, and it now expected an annual profit of £155million, up from previous estimates of between £125million and £135million.

The update got a positive reception from analysts at Kepler Cheuvreux, who said Page was ‘very well positioned’ to benefit from the reopening of the economy.

The broker said the company was at ‘an inflection point’ and that the shares were ‘attractively valued’.

Construction firm Galliford Try said it had been added to a £1.6billion public sector framework that will cover new-build, refurbishment and infrastructure projects. Shares rose 0.3 per cent, or 6p to 173p.