The departure of controversial and outspoken presenter Piers Morgan prompted a sell-off in ITV shares yesterday.

The broadcaster’s stock fell 3.8 per cent, or 4.8p, to 121.55p after the Good Morning Britain host quit amid a backlash against comments he made about the Duchess of Sussex’s interview with Oprah Winfrey.

Morgan had been credited with boosting GMB’s viewing figures since he joined in 2015.

ITV’s stock fell 3.8 per cent after Good Morning Britain host Piers Morgan quit amid a backlash against comments he made about the Duchess of Sussex’s interview with Oprah Winfrey

Neil Wilson at Markets.com added: ‘Investors may be a little worried about the loss of ratings for GMB – it wasn’t exactly doing that well before he joined and its prime-time slot will have repercussions for ads. Love or loathe, Morgan boosted ratings. It could also be that investors are worried about an investigation over comments made by Morgan on air.’

But City analysts were upbeat about ITV’s prospects as they weighed up its full-year figures – which were published on Tuesday but somewhat overshadowed by the Morgan furore.

The numbers showed profits dropped almost 40 per cent to £325million last year as turnover fell 16 per cent to £2.8billion. But there were encouraging signs advertising was bouncing back. 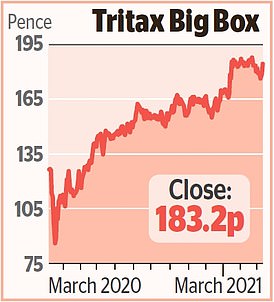 Tritax Big Box saw record demand for space in its warehouses in 2020 as online shopping boomed.

The landlord – which counts Tesco, Apple, Amazon and DHL among its customers – collected 99.4 per cent of rents due last year and expects to receive the remaining 0.6 per cent in 2021.

Profits ballooned by 218 per cent to £450million after its properties were revalued.

Shares in major miners tumbled for a second day as the prices of key metals continued to lose ground.

Price of copper and iron ore, an ingredient used to make steel, fell by 2.5 per cent and 3 per cent respectively yesterday, as traders digested data on China’s imports for the first two months of the year – which were less rosy than expected – and environmental curbs placed on a major steel making city.

Anglo American wasn’t spared from the gloom, but fell by less than its peers after it sold £400million of diamond sales at its De Beers business, in the second of ten auctions. This was up from £260million in the second cycle of 2020. Shares fell 1 per cent, or 28.5p, to 2857p.

Balfour shares fell 2.1 per cent, or 6p, to 285.8p, despite the company predicting that profits would return to 2019 levels this year after slumping in 2020.

Concrete and asphalt-maker Breedon also believes the future is bright – with bosses saying it will benefit from infrastructure spending and long-term demand for housing.

Brick-maker Ibstock was met with a warmer reception, even as revenues were cut by almost a quarter to £316million after its housebuilding customers were forced to shut sites during the first Covid lockdown.