MARKET REPORT: Lockdowns take the fizz out of Fevertree shares

Shares in Fevertree plunged after the closure of bars during the pandemic took the fizz from the tonic maker’s sales.

The FTSE 250 company said its UK revenues tumbled by 22 per cent to £103.3million last year, as hospitality venues were forced to close because of national lockdowns.

It meant that overall revenues fell 3 per cent to £252.1million – as drinking at home failed to make up the difference – with profits down 29 per cent to £51.6million.

Sales slump: Fevertree said its UK revenues tumbled by 22 per cent to £103.3m last year, as hospitality venues were forced to close because of national lockdowns

Fevertree said there were bright spots too. The company’s sales in the US rose by 23 per cent, while sales in the rest of the world – outside Europe – were up by 58 per cent.

And it said a 62 per cent drop in on-trade sales – those from pubs, restaurants and bars – had been cushioned by a 22 per cent rise in off-trade sales, which are those from shops and online. 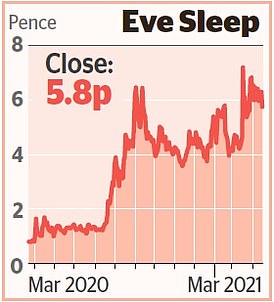 Eve said it had been boosted by the launch of ‘well slept’ products, including hot water bottles, socks and pyjamas.

Boss Cheryl Calverley said an overhaul of the website, supply chains and delivery services had also been completed.

Fevertree now expects to see things improve this year as the vaccination rollout continues to gather pace, helping the economy to reopen.

Tim Warrillow, the firm’s co-founder and boss, said: ‘Although 2020 presented many unforeseen challenges, our resilient performance highlights the strength of the business and the Fevertree brand, which is testament to the proactive and entrepreneurial way our team and our partners responded.

‘Whilst our on-trade business remains impacted by the continued shutdowns and restrictions across many of our regions, we have had a very positive start to 2021 across the off-trade.’

Fevertree said it was recommending a final dividend of 15.7p per share, an increase of 4 per cent compared to the previous year, ‘as a reflection of confidence in the financial strength of the group’.

It came on another choppy day for the FTSE 100 and FTSE 250, which both struggled to get liftoff.

Blue chip riser Informa was up 4.1 per cent, or 23.6p, to 598.6p following news that its World of Concrete event will be one of the first to return to Las Vegas this summer.

The firm is behind other shows that will resume as well, including Vegas Cosmetic Surgery and the International Roofing Expo.

Fellow Footsie member BT was down 0.8 per cent, or 1.2p, to 151.3p, however, despite what was seen as a positive regulatory decision on its rollout of fibre broadband.

Ofcom yesterday cleared the way for the firm and rivals to charge higher prices for top speed internet connections, which BT argues is necessary to properly fund the national upgrade.

BT boss Philip Jansen said Ofcom’s decision was ‘good news’ and vowed to ‘build like fury’ to get 20m premises connected with fibre by the mid to late 2020s.

Because of Covid-related restrictions, the company was forced to close its gyms for large periods of the year – sending revenues plunging 47 per cent to £80million.

However, bosses said they are focused on reopening sites in England from April 12 and have retained more members during the current lockdown than during the others.

Some 97 per cent of members say they expect to return to the gym as soon as possible, the firm said, with 75 per cent saying fitness will be more important to them than before the pandemic.

Richard Darwin, chief executive, said: ‘People are really raring to get back and we think there will be plenty who are also keen to become members.’