Mining stocks led the FTSE 100 to a new post-pandemic high as fears over the Omicron variant continued to ease.

London-listed mining groups were among the Footsie’s biggest risers with BHP up 4.5%, and Antofagasta 7.5% higher while Anglo American gained 3.9%

Oil stocks helped pull the FTSE 100 higher as crude prices continued to climb, passing $84 a barrel for the first time since November as fears that the Omicron variant will hit fuel demand began to fade. 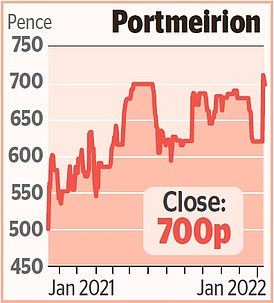 The maker of Royal Worcester crockery expects record sales of at least £104million for 2021, 10 per cent higher than current estimates and 18 per cent ahead of 2020.

Full-year profits are predicted to be £7million, a 9 per cent increase on market forecasts and five times higher than the £1.4million posted the previous year.

Scottish Mortgage Investment Trust gained 2 per cent, or 23.5p, to 1219.5p as investors turned optimistic again on US tech stocks, which make up a large portion of its portfolio.

Markets were boosted by Federal Reserve chairman Jerome Powell saying the US central bank would do whatever it takes to contain inflation.

Distribution specialist Bunzl bounced 2 per cent, or 54p to 2777p after snapping up US firm Tingley Rubber for an undisclosed sum.

Tingley focuses on PPE and footwear and generated £49million in revenues last year. Mid-cap customer review website Trustpilot climbed 2.1 per cent, or 5.8p, to 273p on the back of a strong trading update.

Topps Tiles dropped 0.6 per cent, or 0.4p, to 63.6p after it warned profit margins were being hit by higher shipping costs and inflation.

It came despite sales rising 1 per cent year-on-year in the 13 weeks to January 1 as good levels of trading extended further into December than usual as customers rushed to finish building projects.

Recruiter Page Group had a record 2021 as wage inflation and staffing shortages caused a boom in demand for its services. Profit for the year was expected to be around £165million.

The contract carries a price tag of £60million for Ultra, with deliveries due to begin in 2024.

The group produced nearly 3.1m tons of its iron ore pellets, 18 per cent higher than the third quarter.

AIM heavyweight Gamma Communications rose as it predicted its earnings for 2021 will be ‘in the top half’ of expectations.

The provider of call centre and business phone systems highlighted strong demand in the UK and Europe. It was up 1.9 per cent, or 30p, to 1590p.

Elsewhere, budget airline Easyjet dipped 1.4 per cent, or 8.6p, to 621p as Deutsche Bank knocked its rating on the stock down to ‘hold’ from ‘buy’.