Engineer Rolls-Royce was one of the strongest blue-chip risers yesterday after securing £405million to build mini nuclear power plants.

The company’s new small modular reactor (SMR) business will receive £195million over the next three years from private businesses including US nuclear energy group Exelon and BNF Resources.

BNF is an investment vehicle for the billionaire Perrodo dynasty, the owners of French oil and gas giant Perenco.

Powering up: Rolls-Royce’s small modular reactor business will receive £195m over the next three years from private firms including US nuclear energy group Exelon and BNF Resources

The funding has triggered £210million in grants from the UK government as part of plans to invest in zero-carbon energy sources and start a ‘green industrial revolution’.

It also forms part of a plan to reinforce the UK’s energy independence, after disruptions to foreign energy imports sent electricity and gas prices soaring.

Rolls will own around 80 per cent of the SMR business, with the programme expected to create up to 40,000 jobs. The business will focus on identifying sites for factories that will make reactor modules for nuclear power plants. 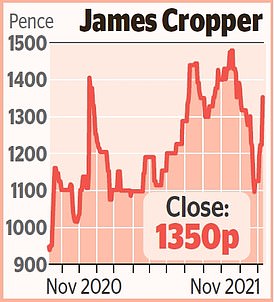 For the six months up to September 25, the firm’s pre- tax profits jumped to £1.9million from zero in the same period a year ago.

Paper sales saw particularly strong growth of 64 per cent year-on-year as the luxury packaging, publishing, art and photography sectors recovered from the effects of the Covid-19 pandemic.

Price increases and new contracts also helped the company to stave off the effects of inflation. The shares surged 10.2 per cent, or 125p, to 1350p.

A power station using one reactor will generate enough energy to power 1m homes despite being the size of just two football pitches.

UK Business Secretary Kwasi Kwarteng said the programme was ‘a once in a lifetime opportunity for the UK to deploy more low carbon energy than ever before and ensure greater energy independence’.

Fears over supply chain issues from sectors such as housebuilding kept the market subdued, although the blue-chip index was supported by BT, which was up 2.6 per cent, or 4.2p, at 162.65p after Berenberg upgraded the stock to ‘buy’ from ‘hold.

Profits soared to £32million from £3million in 2020 for the six months to the end of September, boosted by supply chain issues pushing up demand for recycled materials.

Insurer Direct Line dropped 4.2 per cent, or 12.2p, to 276p as it warned that prices were ‘likely to be volatile’ in the first months of 2022 as new regulations from the Financial Conduct Authority took effect.

The news overshadowed a solid third quarter that saw the firm’s gross premiums rise 0.7 per cent to £857.1million thanks to ‘strong growth’ in its commercial arm and Green Flag breakdown cover business.

Office space landlord Sirius rose 4.7 per cent, or 6.2p, to 138.8p after completing the £34million purchase of a German business park.

ITM Power also rose 6.7per cent, or 32.1p, to 511.5p after unveiling plans to buy a site near Sheffield to build its second giga-factory in the UK to generate green hydrogen for electricity generation.

Meanwhile, Pod Point, a maker of charging stations for electric cars, got off to a bit of a flat start as it moved to the premium segment of the London Stock Exchange’s main market. Shares were up 1.8 per cent, or 4p, to 224.4p but below the listing price of 225p.

Looking to today small-cap miner Emmerson (down 2.6 per cent, or 0.15p, to 5.65p) is expected to get a boost as the Mail understands it will unveil plans to invest £35million in Africa’s first commercial potash mine, producing fertiliser to boost crop yields.