MARKET REPORT: Oxford Biomedica given a £100m vaccine booster after helping churn out the Astrazeneca jab

The pandemic has thrust little-known companies into the spotlight and none more so than Oxford Biomedica.

Pre-Covid the Oxford University spin-out was ticking along on the AIM market, developing drugs to treat Parkinson’s disease.

But when the pandemic struck the firm stepped up, churning out tens of millions of doses of vaccine for Astrazeneca.

Covid fight: Oxford Biomedica’s vaccine manufacturing programme has been so successful that it has raised revenue expectations from the drug for 2021 to £100m from £50m previously

So successful has the manufacturing been that the now FTSE 250 company has raised revenue expectations from the drug for 2021 to £100million from £50million.

Oxford Biomedica said production volumes would double by the end of the year to meet demand. Apart from a small batch imported from India’s Serum Institute a few months ago, all the UK supply of the Astra vaccine has been made by Oxford Biomedica and Newcastle-based Cobra Biologics.

Analysts at Liberum said: ‘This is a huge endorsement of Oxford Biomedica’s capabilities and should position the company extremely well for new partnerships outside of its traditional market.’ Shares added 10 per cent, or 104p, to reach 1106p. 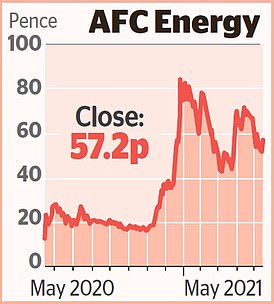 AFC Energy was the subject of takeover chatter among small cap brokers.

Based in Cranleigh in Surrey, and 3pc-owned by Chelsea tycoon Roman Abramovich, it is a developer of hydrogen fuel-cell technology – an alternative to fossil fuels.

But the space is ripe for consolidation. ITM Power and Ceres Power are already listed while Elcogen is ramping up to list this month.

British Airways owner IAG was top of the leaderboard despite confusion over whether holidaymakers should travel to countries on the amber list, such as Spain and France.

Lender Natwest was hot on IAG’s heels despite the bank’s chairman Howard Davies doing his best to talk the sector down.

‘The City will remain Europe’s largest financial marketplace but its golden age as Europe’s financial capital is over,’ he said in magazine Project Syndicate. Investors ignored the comments and shares rose 2.7 per cent, or 5.15p, to 198.55p.

BP was also making gains after Brent crude touched $70 per barrel for the first time since March before sliding back.

Analysts said the gains were over fears that long-term oil supplies may not meet consumption as companies scale back production due to environmental concerns.

At the same time Shell investors said the company’s environmental plan did not go far enough and one in ten shareholders voted against the oiler’s energy transition strategy at the annual general meeting. BP climbed 0.4 per cent, or 1.4p, to 316.8p; Shell fell 0.4 per cent, or 5.8p, to 1362.6p.

It was a good session for tobacco investors as cigarette giant Imperial Brands clocked up strong cigar sales in the first half of this year.

Cigar sales have boomed during lockdown as smokers puff at home, unrestricted by office rules. Its shares were up 1.5 per cent, or 24p, at 1614p.

Among the fallers was the usually reliable packaging firm Bunzl, which snapped up medical distribution business Obex for £27million.

On the FTSE 250 the biggest gainer, 4imprint, rose 10.7 per cent, or 245p, to 2545p, after the marketing merchandise maker said it was recovering well from the pandemic.

And the new Metro Bank chief executive Daniel Frumkin breathed a sigh of relief as investors backed his £500,000 bonus – the lender’s remuneration report was passed by 83 per cent.