Shares in Trainline crashed after ministers unveiled plans for a state-owned rival to sell tickets.

Slump: Trainline stock – which listed in London at 350p two years ago, giving it a value of £1.7bn – plunged more than 30 per cent in early trading to as low as 289

This is a far cry from its peak above 550p early last year – and provides a boost to billionaire investor George Soros who has been shorting, or betting against, the stock.

The sell-off came as investors digested the creation of Great British Railways in the biggest shake-up of the industry since privatisation three decades ago.

Under the sweeping reforms, GBR will own and manage rail infrastructure, issue contracts to private firms to run trains, set most fares and timetables – and sell tickets.

That spells trouble for Trainline, which has become the app or website of choice for many passengers buying tickets. 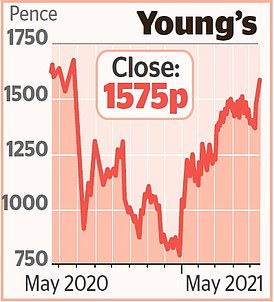 Pub owner Young’s has said it expects business to be back to pre-pandemic levels by the end of June after an ‘encouraging’ reopening.

The company, which runs 273 pubs across the UK, opened all of its sites this week after venues were able to welcome customers inside again.

He added that future booking levels are looking strong as the company struck an optimistic note. Shares climbed 2.3 per cent, or 35p, to 1575p.

Trainline insisted it was ‘supportive’ of the proposals, saying they will provide it with ‘new opportunities to innovate for the benefit of customers and further grow its business’.

The slump in the share price suggests others are not so sure.

Susannah Streeter, senior investment and markets analyst at Hargreaves Lansdown, said: ‘Trainline had been glimpsing light at the end of the tunnel as lockdown eased, but the Government’s shake-up of the railways has seriously pulled the breaks on prospects for recovery.’

Back on the stock market, it was another bright day for Future, which added to the previous session’s near-11 per cent gain with a rise of 9.6 per cent, or 254p, to 2904p.

The magazine publisher – whose publications include everything from FourFourTwo, Golf Monthly and Horse & Hound to Guitar World, Country Life and Classic Rock – was given a fresh lift by upgrades from Deutsche Bank and Berenberg on the back of its booming revenues and profits.

Watches of Switzerland, Britain’s biggest seller of Rolex watches, expects sales to grow as much as 21 per cent this year as consumers splash out after lockdown.

However, sales to tourists and in airports are not expected to fully recovery. Shares edged up 0.1 per cent, or 1p, to 771p after revenues in the year to May 2 rose by 13 per cent to £905million – slightly less than expected in the City.

The company is also returning furlough cash to the Government. Fashion group N Brown reported a 72.3 per cent fall in profits to £9.9million for the year to February after revenues slid by 13 per cent to £728.8million.

The Jacamo and Simply Be owner told investors it has seen ‘some early signs of progress’ after raising £100million to fund a transformation strategy to help sales rebound, with its core brands returning to revenue growth in the fourth quarter. Shares fell 5.8 per cent, or 4.05p, to 66.3p.

Restaurants, pubs and bars may have reopened but drinks mixer business Fevertree (up 7.1 per cent, or 183p, to 2749p) said it believes the boost in at-home cocktail mixing is here to stay.

‘It is clear that at-home consumption of long mixed drinks is becoming increasingly established,’ the company said.

Shares in David Beckham’s Guild Esports jumped 10.1 per cent, or 0.7p, to 7.6p after it revealed it has 500,000 followers on social media less than a year after it was formed.