MARKET REPORT: Rolls-Royce fires up after figures show heavy industry grew faster in March than in any month for more than a decade

Upbeat manufacturing data and hopes of a return to foreign travel provided a double whammy of good news for engineering giants.

UK heavy industry grew faster in March than in any month for more than a decade, according to closely tracked figures from data provider IHS Markit.

Orders flooded in and companies hired staff at the fastest rate since 2014 as factories shrugged off a lull at the start of the year.

Flying high: Rolls-Royce was boosted by  data which showed UK heavy industry grew faster in March than in any month for more than a decade

Production is still squeezed – and supply chains are not running on all cylinders – but confidence in a return to normality is on the up.

Manufacturers in the UK are benefiting and will continue to benefit from the speed of the vaccine rollout, which could stymie the recovery in other countries.

Shares in engineering stalwarts Melrose and Rolls-Royce fired up on the back of the data.

But they were also boosted by encouraging signs that a ‘traffic light’ approach to restarting foreign travel could be on the cards, putting countries on different lists depending on their infection rates. 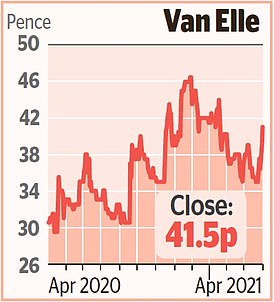 Shares in engineering minnow Van Elle jumped after it snapped up a firm that specialises in making foundations for construction projects.

It will initially spend £1.8million to buy Screwfast – but the deal could grow to £3.7million if it meets performance targets.

Screwfast – whose management and staff will join Van Elle – has worked on building the foundations for Crossrail, for temporary venues at the London 2012 Olympics and for highways. Van Elle rose 6.4 per cent, or 2.5p, to 41.5p.

Any policies that help Britons go beyond staycations this summer will be a welcome boon for them.

Sentiment was also boosted by Wall Street with the S&P 500 reaching a record high as it traded above 4,000 for the first time.

The index is a broad basket of major American firms that includes tech giants such as Facebook, Apple, Netflix, as well as the likes of Walt Disney, JP Morgan and McDonald’s.

The Dow Jones and Nasdaq also rose between 0.5 per cent and 1.5 per cent last night.

Quilter rounded off a restructuring by selling its international division to Utmost International for £483million.

Boss Paul Feeney has been gradually flogging unwanted parts of Quilter – which split from insurer Old Mutual in 2018. He is keen to ground the company in its UK wealth management business.

Quilter’s stock rose 4.3 per cent, or 6.8p, to 166.65p, as it outlined plans to share the winnings from the sale by handing investors a substantial one-off dividend.

Mastercard will invest £72.5million in a subsidiary of mobile phone mast operator Airtel Africa (up 2.2 per cent, or 1.75p, to 81.05p) that lets people send money to one another and pay bills.

The investment values this arm of the business at £1.9billion in total. Airtel works in 14 countries and its money services reach more than 14m people.

Elsewhere on the mid-cap index, body armour maker Avon Rubber advanced 4.9pc, or 156p, to 3316p after the US army increased the size of an existing deal to supply battlefield helmets by £21million.

Around £13.7million of this is for a new order for helmets – which will start making Avon money in the current financial year.