Head honchos at Sainsbury’s have insisted it will not fall prey to private equity as predators circle the sector.

Chairman Martin Scicluna said the supermarket group had been watching the bidding war at Morrisons (0.3 per cent, or 0.8p, to 264.9p) which follows the takeover of Asda by the Issa brothers in a private equity-backed bid last year.

But, speaking at the company’s annual meeting, he added that bosses are ‘clearly happy’ with the strategy laid out by chief executive Simon Roberts and ‘on the execution of that plan’.

Sainsbury’s said its annual earnings will reach £660m, it said as sales of food and drink rose by 1.6 per cent in the four months to June despite pubs and restaurants reopening

It comes a few days after the FTSE 100 company said it would make £40million more in profits this year than expected.

Annual earnings will reach £660million, it said as sales of food and drink rose by 1.6 per cent in the four months to June despite pubs and restaurants reopening.

The interest in Morrisons has fuelled speculation that its rivals – the largest of which are Sainsbury’s and Tesco (up 1.5 per cent, or 3.45p, to 237.7p) – could also become takeover targets. 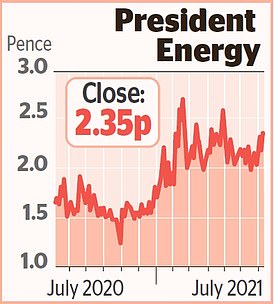 Oil and gas minnow President Energy surged after its subsidiary Atome took a 75 per cent stake in a green hydrogen and ammonia company.

The deal will allow Atome to supply green hydrogen and ammonia in Europe as it tries to move away from solely selling fossil fuels.

President did not name the Northern European hydrogen firm, which it said does not have any assets at the moment.

It is hoped a pilot project will start production by the end of 2023. Shares in President – which produces oil in Argentina and the US and is exploring in Paraguay – rose 6.8 per cent, or 0.15p, to 2.35p.

Sainsbury’s shares edged up 0.1 per cent, or 0.4p, to 284.2p as Scicluna dismissed bid talk and backed the company’s leadership and plans.

He added that Sainsbury’s is ‘working hard to get products back into stores’. The rise of streaming services has also prompted the group to scrap selling CDs and DVDs as people turn online for entertainment.

The rise in Sainsbury’s shares followed the trend on an upbeat day that saw the FTSE 100 end on a high.

It was nudged higher by big miners and luxury fashion house Burberry, which was boosted by an upgrade from Goldman Sachs analysts.

In an investment note to clients, brokers at the banking titan gave Burberry’s shares a ‘buy’ rating, up from ‘neutral’.

They said the company is now at the ‘finishing stages’ of a reset launched by boss Marco Gobbetti and has been undervalued compared with many of its luxury-sector peers. Burberry rose 3.8 per cent, or 76p, to 2063p.

Both of London’s premier indexes were lifted by a rise in travel stocks, particularly airlines.

Easyjet was the favourite among traders after it revealed that bookings to amber-list destinations had increased by 400 per cent.

The Government said on Thursday that double-jabbed Britons travelling back to England from ‘amber’ countries will no longer have to self-isolate.

Despite the good news, legal action led by Manchester Airports Group and backed by Ryanair, Easyjet and IAG against Covid travel curbs kicked off.

Gambling software giant Playtech was treading water (closing down 0.4 per cent, or 1.6p, at 411.8p) after it delayed a vote on a £150million buyout offer for its financial trading division Finalto from a management consortium.

Playtech agreed the deal weeks ago but has since been approached by 5 per cent shareholder Gopher Investments about a higher, £180million bid.

The ballot has been pushed back by two weeks to July 29 so that investors can ‘consider recent developments’.

Gopher also sweetened its offer by promising to pay an extra £7.2million to cover the cost of Playtech withdrawing from the already-agreed deal.

Over on AIM, Evgen Pharma shed a third of its value after the scrapping of a study into whether one of its acute lung infection drug could help treat patients.

Shares fell 34.9 per cent, or 2.6p, to 4.85 after it reported what boss Huw Jones described as surprising and disappointing trial results.