IQE lost around a quarter of its value after it shocked the market with dour forecasts.

The semiconductor wafer-maker said it was getting hit from all directions as a global chip shortage, falling demand for new mobile phones, currency movements and the slow, stop-start rollouts of 5G infrastructure knocked business.

Profits are set to tumble by 40 per cent to around £18million and sales by 15 per cent to £152million this year, IQE said in a trading update.

Profits warning: IQE said it was getting hit by a global chip shortage, falling demand for new mobile phones, currency movements and the slow, stop-start rollouts of 5G

IQE does not make chips. Rather, the AIM-listed group makes the wafers which are then used as the basis for the semiconductors which are vital to products such as phones – including Apple iPhones – and mobile network infrastructure.

The warning from IQE comes as smartphone makers and companies in a range of other industries place fewer orders for high-tech kit as they grapple with a shipping and freight crunch.

Russ Mould, investment director at AJ Bell, said: ‘Current movements have something to do with the weak numbers. 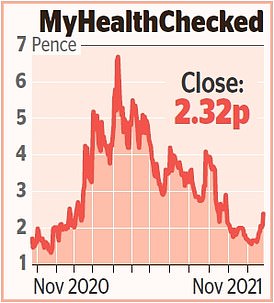 The Cardiff-based company rolled out a rapid antigen test and a verification service for people who are double-jabbed and due to arrive in England from a non-red list country.

This will be followed next week by a Fit to Fly rapid test for those leaving the UK.

The tests can be arranged online. NHS professionals will verify the results of the swabs, said the AIM-listed group.

But the real blows are lower-than-expected global sales of 5G mobile telecoms infrastructure and emerging signs of slackening demand in the smartphone market, which may be related to supply chain disruption and chip supply shortages elsewhere.’

Another firm nursing heavy losses was Genus, which plunged to the bottom of the FTSE 250 leaderboard after it too issued a profit warning.

The livestock breeder warned that an unstable pig market in China meant annual earnings would be ‘moderately’ lower than previously forecast. Genus breeds animals after analysing their DNA to create the hardiest herds. It supplies pig and cow breeding stocks to China.

The country’s pig market has driven rises and falls in Genus’ results over the past couple of years after outbreaks of African swine fever led to millions being culled in 2019. Its stock closed 10 per cent lower, down 524p, to 4726p.

At the other end of the scale, Intertek shares popped after it told investors that revenues rose – albeit modestly, at 2.2 per cent – in the four months to October.

Intertek is one of the FTSE 100’s lesser-known companies. It provides tests, inspects and certifies goods in industries from chemicals and food to transport and construction.

The group says companies are now investing more in quality assurance. Its stock rose 6 per cent, or 310p, to 5470p.

European markets were shaken by fresh Covid outbreaks that are gathering pace on the continent.

France’s Cac was marginally in the red while Germany’s Dax fell 0.4 per cent as the World Health Organisation said there could be another 700,000 deaths in the region.

The company has started its financial year well – with sales 14 per cent higher in the first four months. It has more than 500 vet practices across the UK, Ireland and the Netherlands.

But the bumper sales numbers were tempered by staffing challenges. Vet vacancies are now at 9.2 per cent – up marginally from 8.8 per cent.

These staff shortages may have been what dragged CVS shares 1.9 per cent lower, down 45p, to 2380p.