MARKET REPORT: Shares in casino-owner Rank on a losing streak

MARKET REPORT: Shares in casino-owner Rank on a losing streak as punters cash their chips amid the cost of living squeeze

Shares in Rank Group, the owner of Mecca Bingo and Grosvenor casinos, dropped into the red after warning its business was under pressure amid low tourism numbers and the cost of living squeeze.

Shares in the firm dropped 3.4 per cent, or 3p, to 85p as its boss John O’Reilly flagged ‘unexpectedly softer trading’ across its casinos in the first six months of 2022, noting that its branches in London had seen ‘few’ overseas visitors.

He warned trading was ‘likely to remain difficult in the months ahead’ as consumer budgets were squeezed by rising costs, leaving them with less cash to splash out on gambling.

Slump: Shares in Mecca Bingo and Grosvenor casinos-owner Rank fell 2.7% as its boss John O’Reilly flagged ‘unexpectedly softer trading’ across its casinos in the first six months of 2022

The group was also grappling with the rising cost of energy, which O’Reilly said was ‘putting pressure’ on Rank’s profit margins.

The bleak outlook came despite the company swinging to a £74.3million profit for the year to the end of June from a £107million loss a year earlier as the relaxation of lockdown restrictions saw the return of customers to its bingo halls and high-rollers to its casinos.

Aside from its issues with customer numbers and inflation, O’Reilly also said the delay to the Government’s plans to reform gambling laws had been ‘disappointing’ for the group.

‘Rank has been waiting patiently for government proposals to reform gambling laws, which much to the company’s frustration have been postponed four times since 2019 amid a dispute among Conservative party members,’ said Victoria Scholar, head of investment at Interactive Investor.

‘The UK’s regulatory tightening and uncertainty continue to be major headwinds for stocks like Rank, alongside the cost-of-living crisis which leaves individuals and households with less disposable income left over at the end of the month.’

The blue-chip index was held back by several large stocks going ex-dividend, meaning the shares were no longer trading with the value of their next dividend payment. 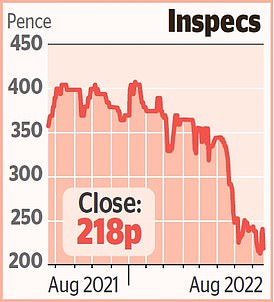 Shares in eyewear firm Inspecs slumped after it struck a cautious tone on its outlook for the rest of this year.

The group said it remained wary of developments in the UK and Europe, saying it was experiencing ‘continual issues’ caused by the war in Ukraine. It also warned of inflation on the continent and Britain, as well as a ‘similar’ situation in the US.

Markets were also hit by inertia as traders worried about how high interest rates will need to rise before inflation is brought under control and back down from the 40-year high of over 10 per cent recorded earlier this week.

This feeling was bolstered by meeting minutes from the US Federal Reserve which showed it was set to continue raising rates to curtail spiralling prices.

‘This is set to be a long drawn-out process though, and hopes that rates could start to come down early next year have been dashed,’ said Hargreaves Lansdown analyst Susannah Streeter.

Meanwhile, several blue-chip retailer firms were in the red after weaker than expected results from US giant Target reinforced worries of a slowdown in consumer demand.

Stock exchange operator LSE Group added 1.2 per cent, or 98p, to 8532p after receiving a target price hike from analysts at RBC.

The bank upped its target on the stock to 10500p from 10300p, saying that after a ‘tricky 2021’ the group was ‘back on track to deliver the benefits’ from its £22billion acquisition of market data provider Refinitiv.